This set has been on the back burner for a little while now as I have been working on other projects...but I'm still trying to track down address for players to try and get TTM autos. Just got one back in the mail yesterday from the new Cal Head Coach. 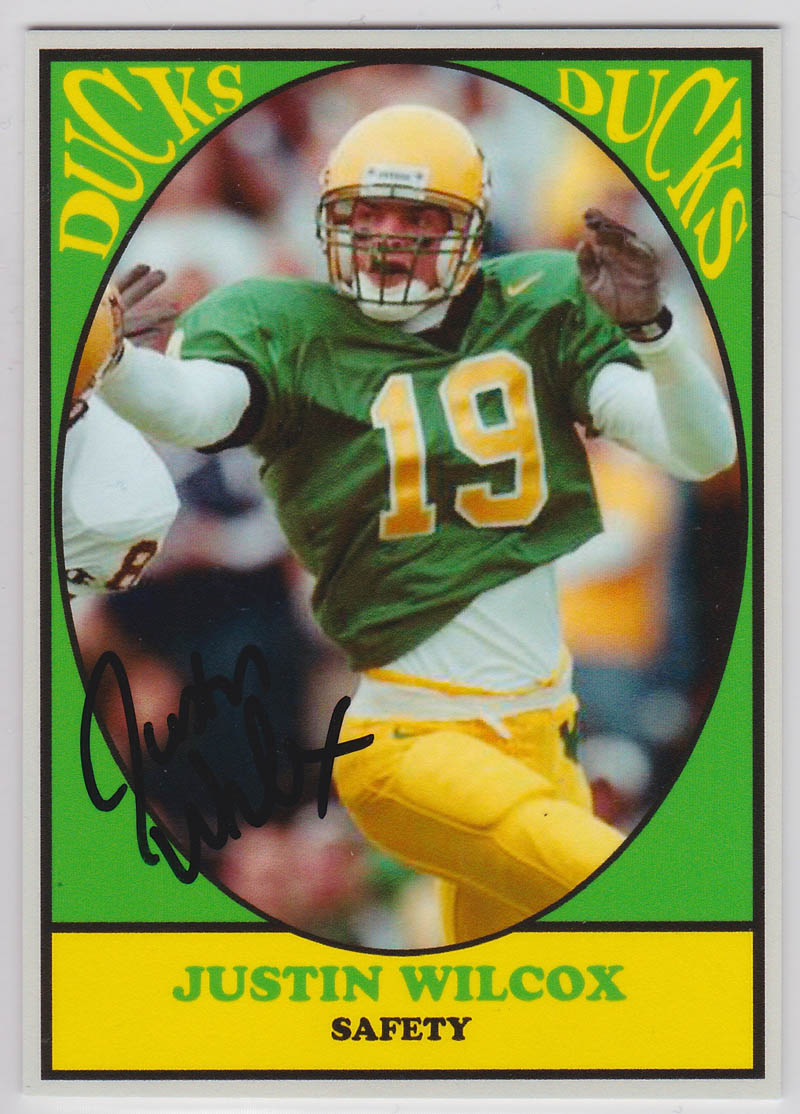 Very cool! Have you tried contacting the players thru the school? They probably won't actually give out addresses, but maybe the school will forward the letters to the players, for you. I would try and contact someone at the school to check on that.

unkilldoo said:
Very cool! Have you tried contacting the players thru the school? They probably won't actually give out addresses, but maybe the school will forward the letters to the players, for you. I would try and contact someone at the school to check on that.
Click to expand...

That's not a bad idea. I will try that.

So, I have been neglicting this set quite a bit lately. I have been focusing on other projects (Super Bowl sets, tutorial, ect.) but I haven't forgotten where I first started and I want to continue working on this set. So, here are several new ones: 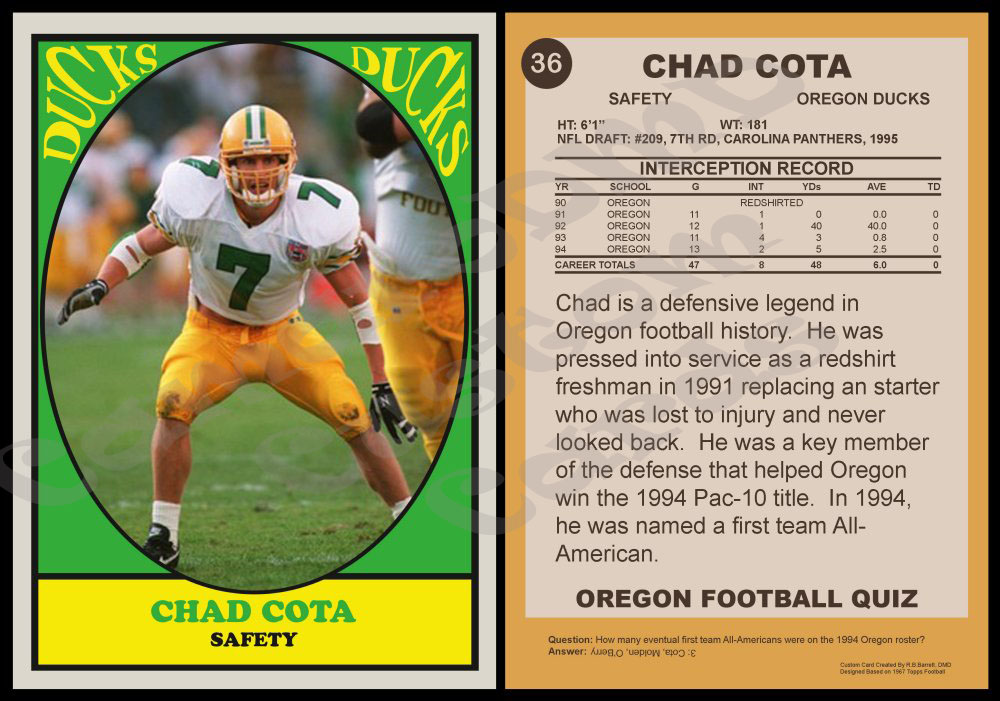 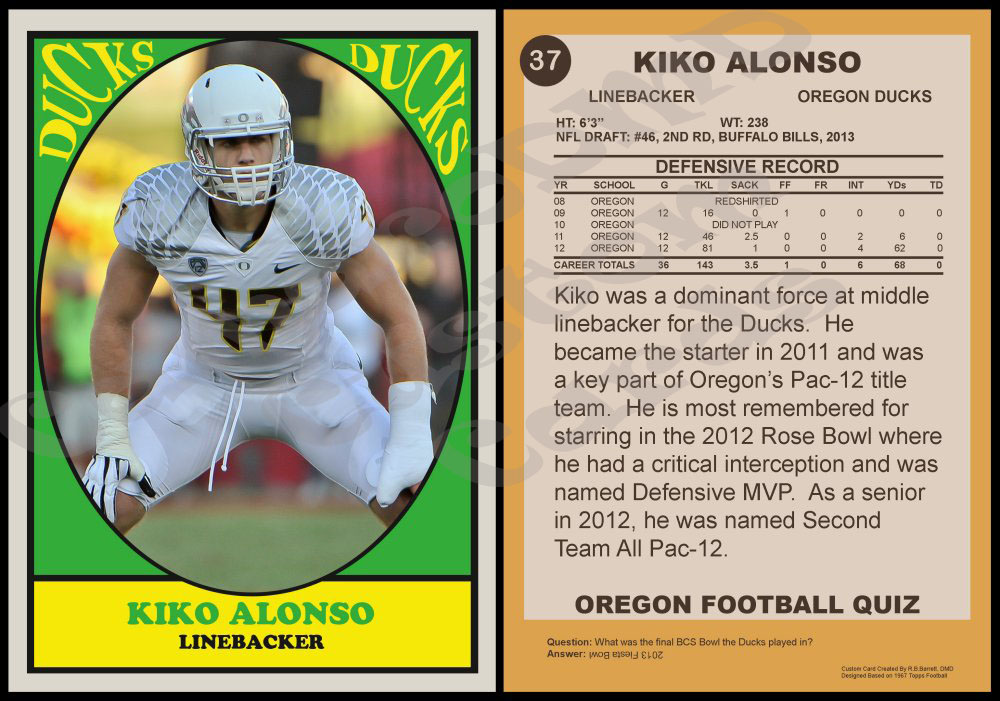 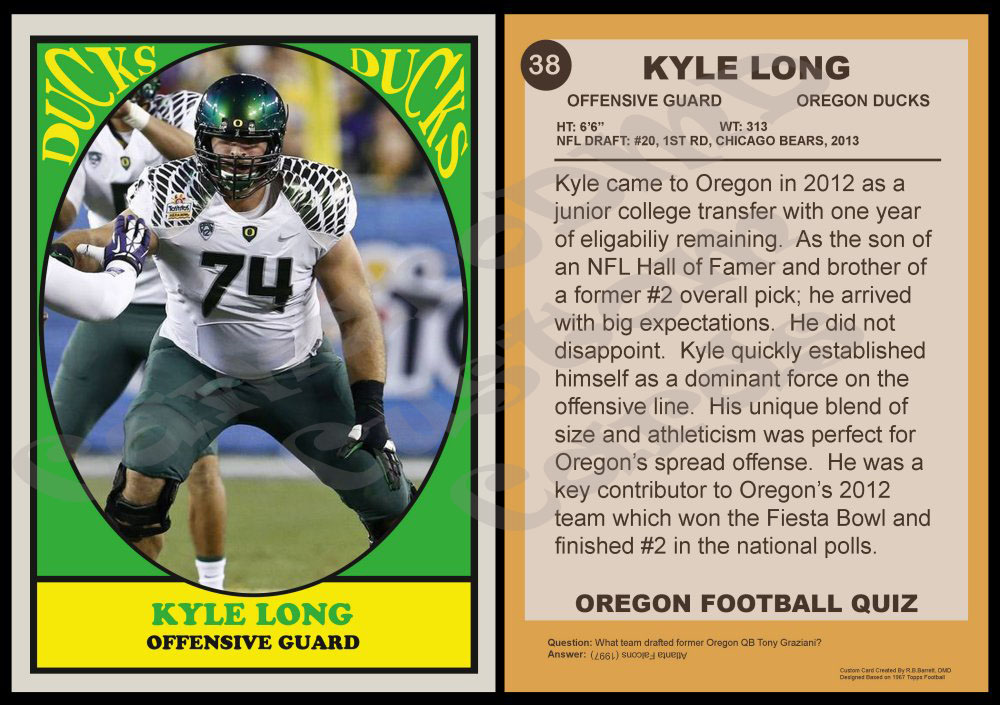 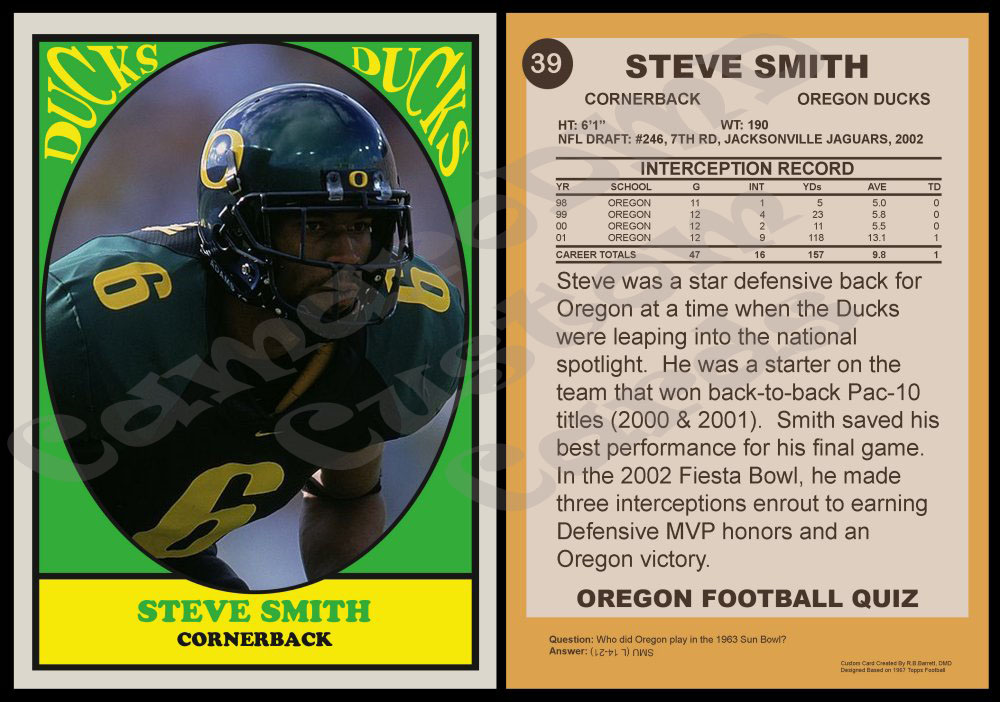 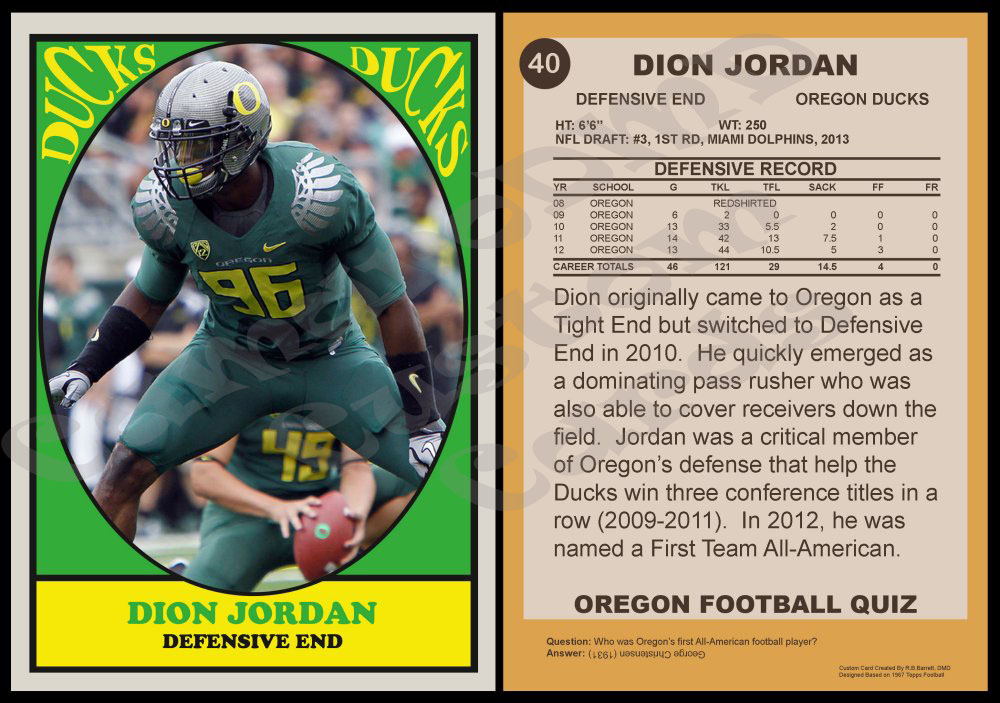 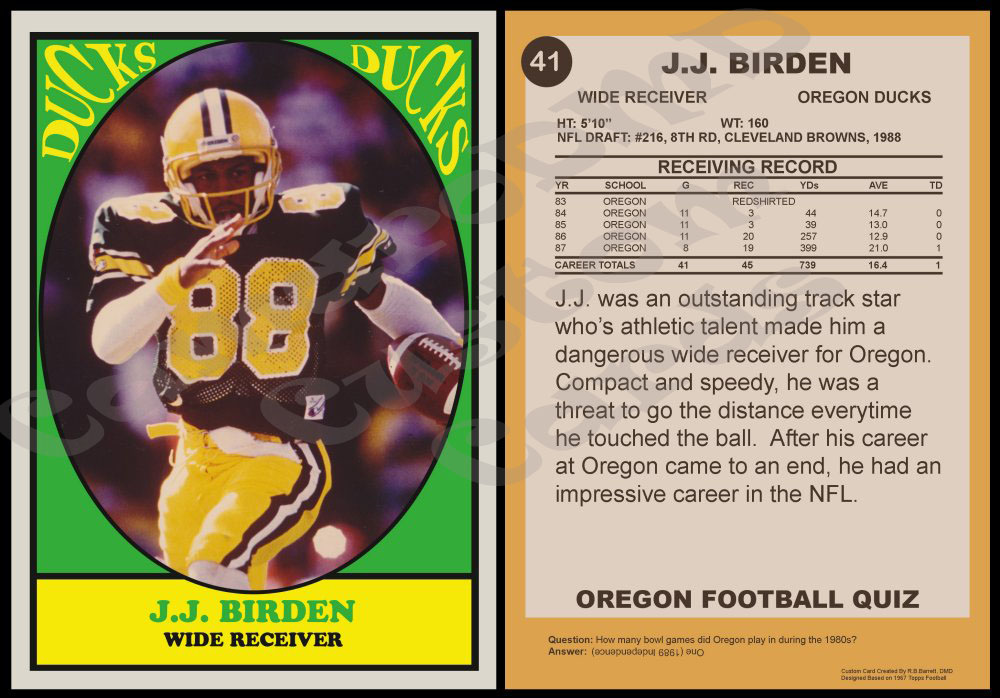 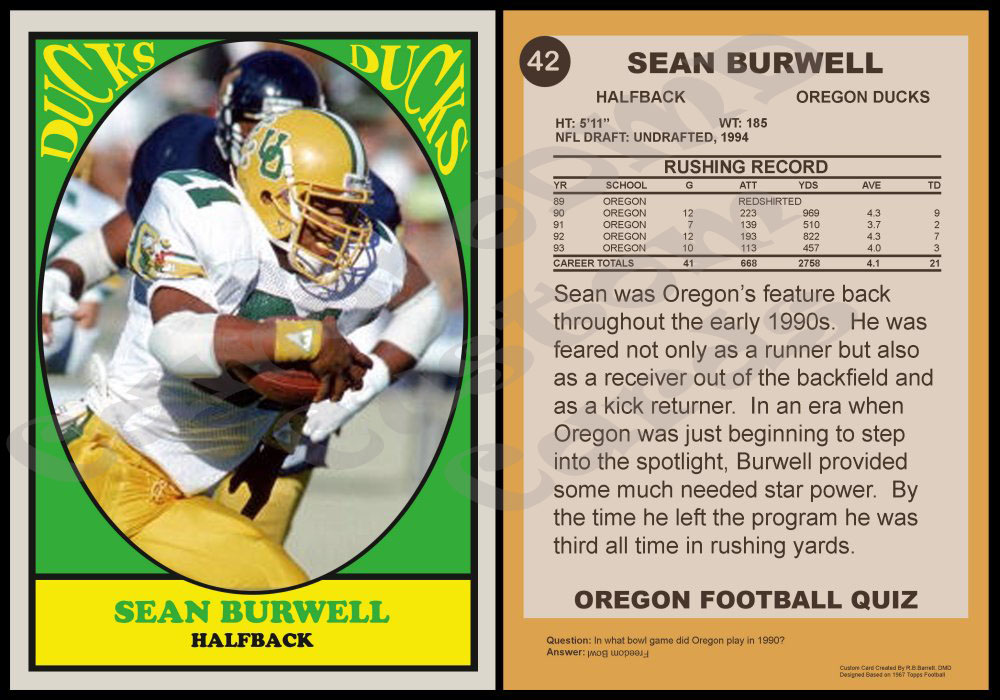 I know that I originally said I wanted to "limit" players to people who I remember playing for the Ducks and that I set a boundry that they all must have been on the 1989 team or newer...but I decided to expand it a little. There are a couple players who played for Oregon between when I was born (1985) and 1989 that I remember watching in the NFL. I figure that is close enough so I included J.J. Birden. I will also probably include a couple others from that era in the future.

So, this one came back in the mail yesterday. Only took about a week...and he's my all-time favorite Duck. So, a pretty cool one.

I've had three new autos come back in the mail in the last couple weeks. It's awesome to start seeing a handful of them signed. 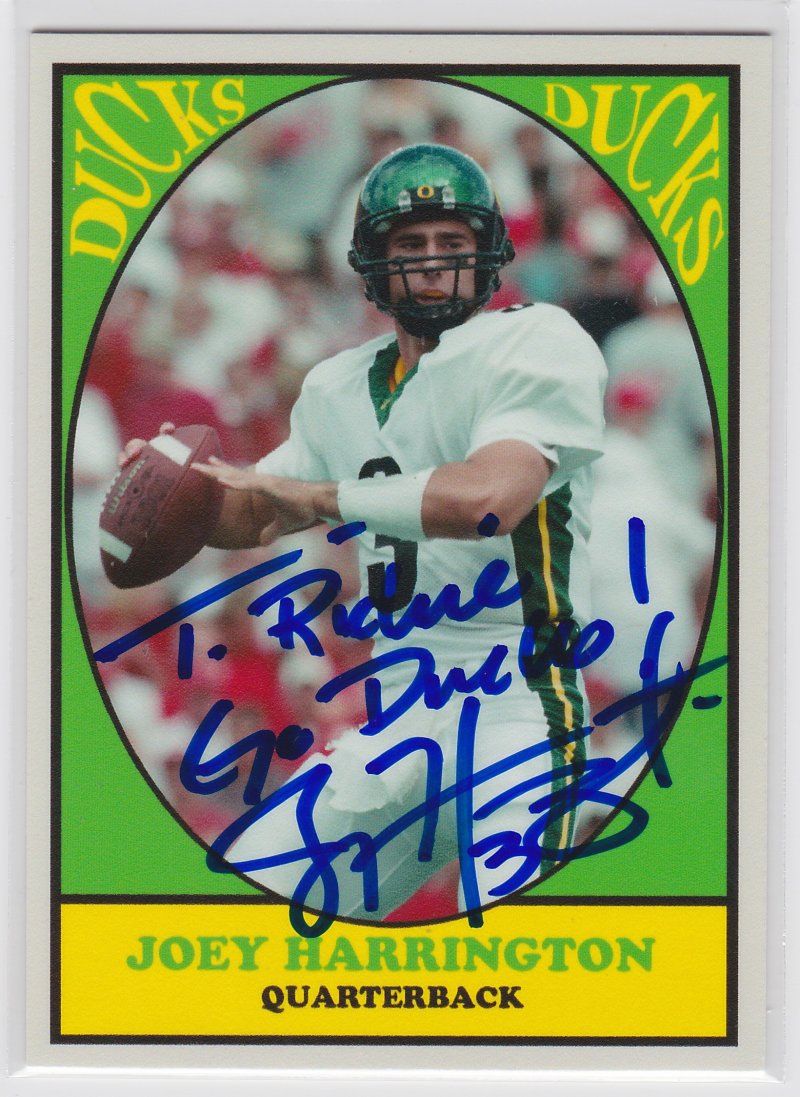 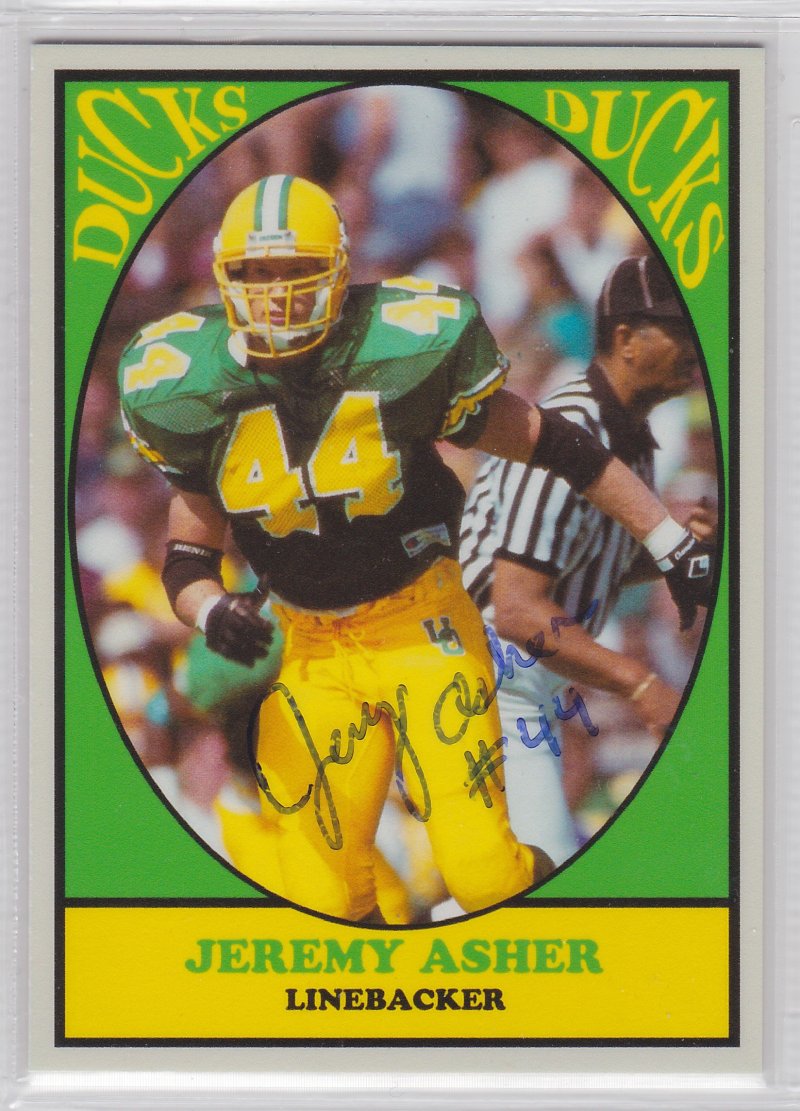 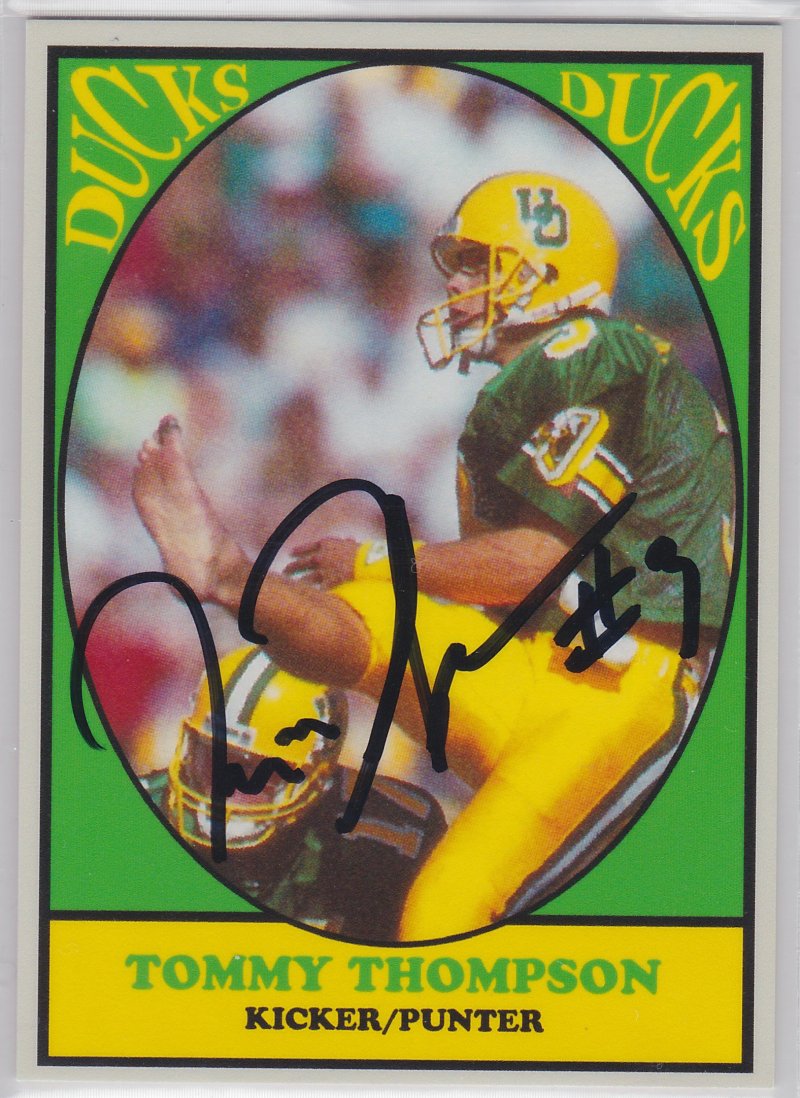 Here's a few more of these I recently finished: 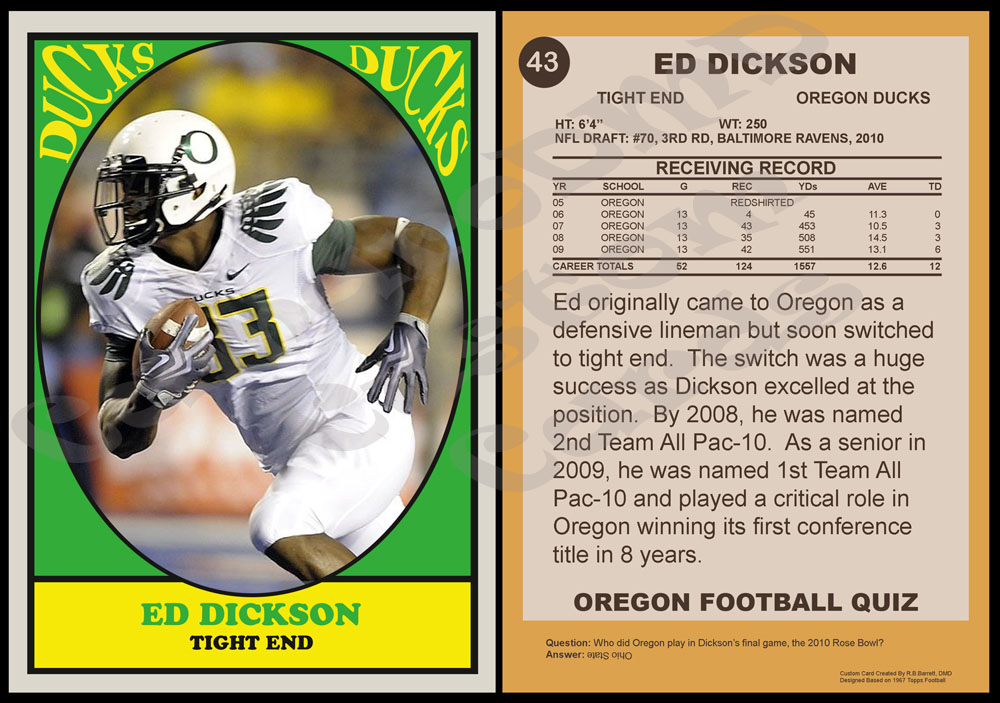 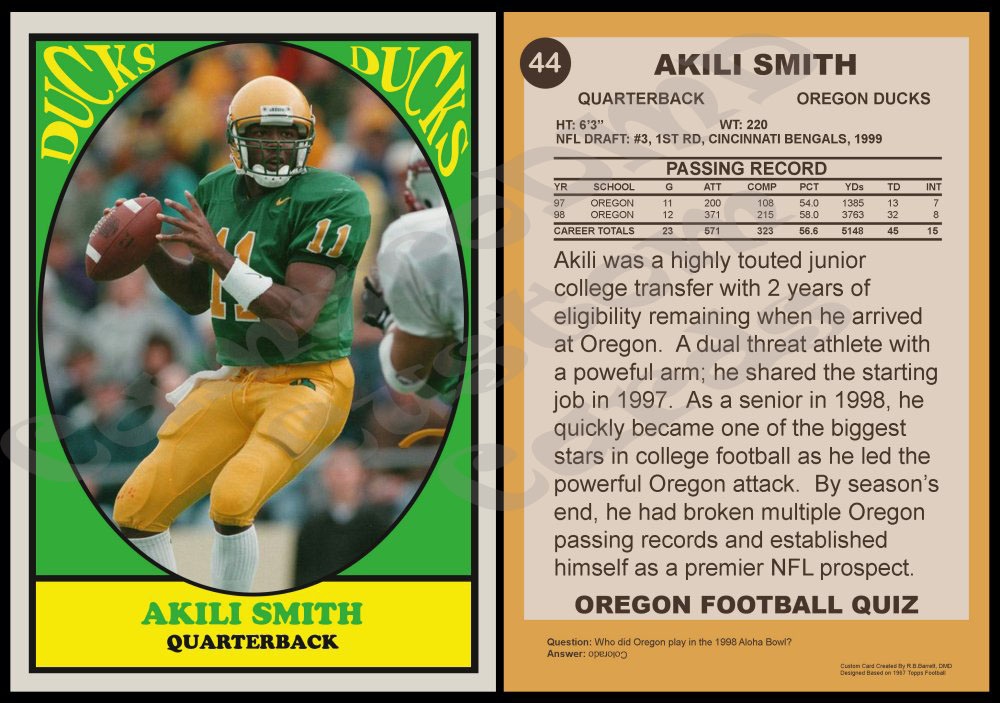 Got one in the mail recently. Former Oregon linebacker and current Louisville DC Peter Sirmon 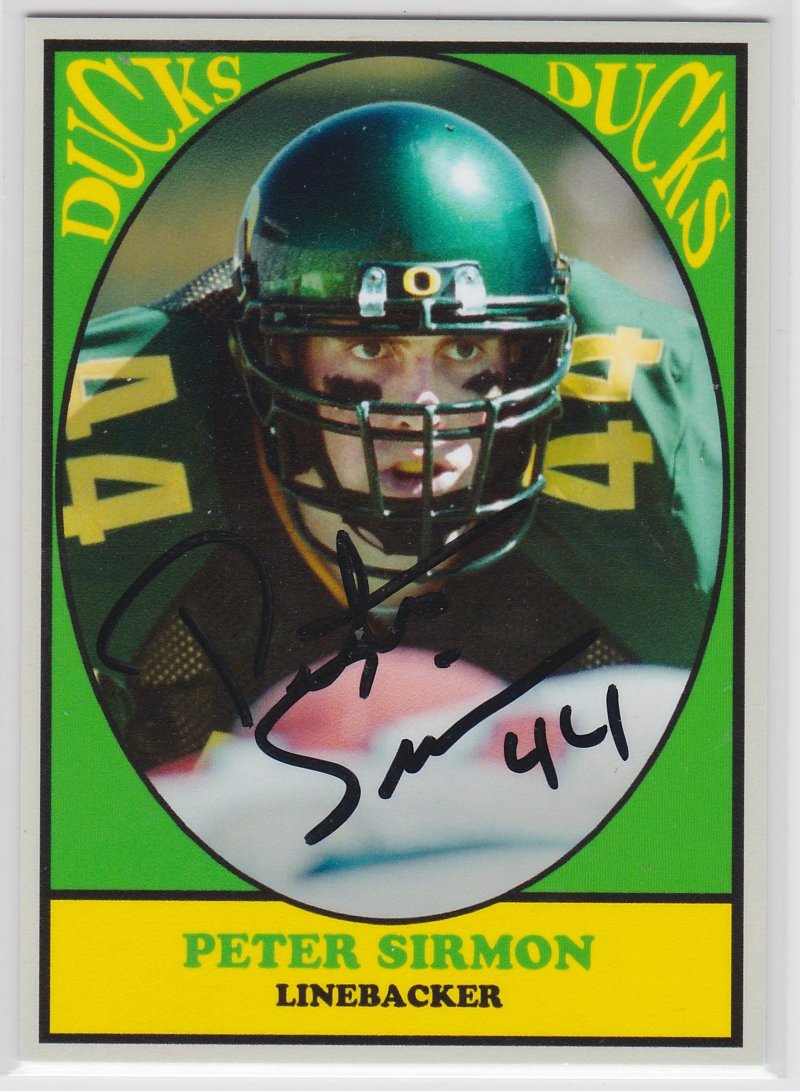 Great looking cards, and some awesome auto's. Looks like the collection is coming along nicely!
R

Sorry, but this collection quacks me up....lol

unkilldoo said:
Great looking cards, and some awesome auto's. Looks like the collection is coming along nicely!
Click to expand...

Thanks. I'm glad you like them. I can't believe how big this set has gotten and how many I have got signed. When I first started it, I had no idea I would take it this far.

I will admit though, I have been slacking off the last few weeks on my custom projects. Been so busy with life, work and other projects. But, more will come in the future.


ranbethscards said:
Sorry, but this collection quacks me up....lol
Click to expand...

Got another auto back in the mail recently...this one from Oregon legend Kenny Wheaton. 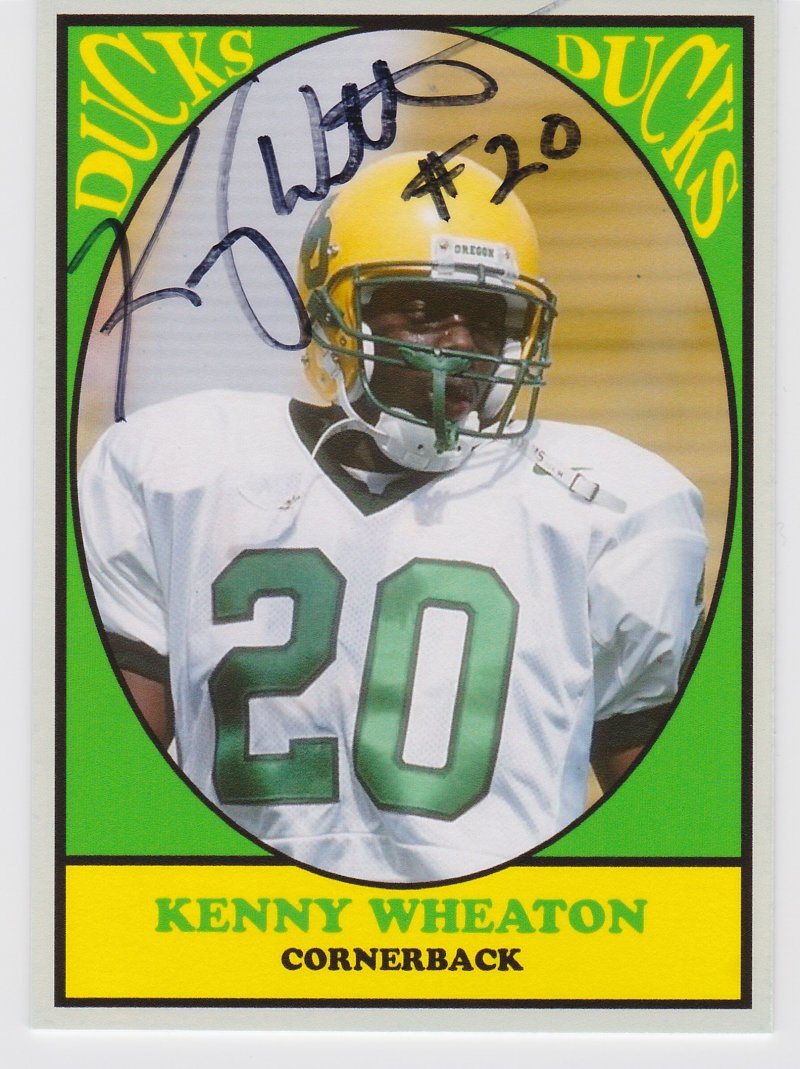 Wheaton is best remembered for one play from the 1994 Washington-Oregon game. That play, known as "The Pick," is considered the greatest play in school history.

Very cool on the card, and an awesome play to put the game out of reach!

unkilldoo said:
Very cool on the card, and an awesome play to put the game out of reach!
Click to expand...

It was a great moment in team history. As you mention, it put the game out of reach. Oregon was leading 24-20 late in the 4th at that point and it was the final score in a 31-20 victory. That win over #9 Washington gave unranked Oregon a 5-3 record at that point. The Ducks would win out the rest of the regular season to finish 9-3 (7-1 in the Pac-10) and a final ranking of #12 in the nation. Oregon would cap this improbable season with a conference title and represent the conference in the Rose Bowl. That season marked the big upswing in Oregon football that they have maintained (for the most part) ever since.