So, I have long been interested in creating custom cards of my own...the goal being to create a card for someone who never really had one and maybe using it for a TTM autograph.

A while back, I decided I wanted to give it a try. Plus, it seemed like a good way to learn photoshop...which I have always wanted to do. So, first I had to decide exactly what I wanted it to look like. I kicked around the idea of creating my own design...but I ultimately decided to try and re-create a classic design. My favorite card set of all-time is 1967 Topps football...I just love the design. So, I decided that would be the design I would re-create.

So, the first thing I did was search through my '67 Topps set and look for the right colors. In an attempt to make it as authentic looking as possible, I wanted to use real cards as a template. I decided that the boarder around the photo should be the green used on the Miami Dolphins cards (pictured below) and the box around the name and yellow font should be the yellow from the Chiefs cards (not pictured). So, I made scans of several cards to use as shape templates as well as source of color (here is an example of the authentic card scans I used). 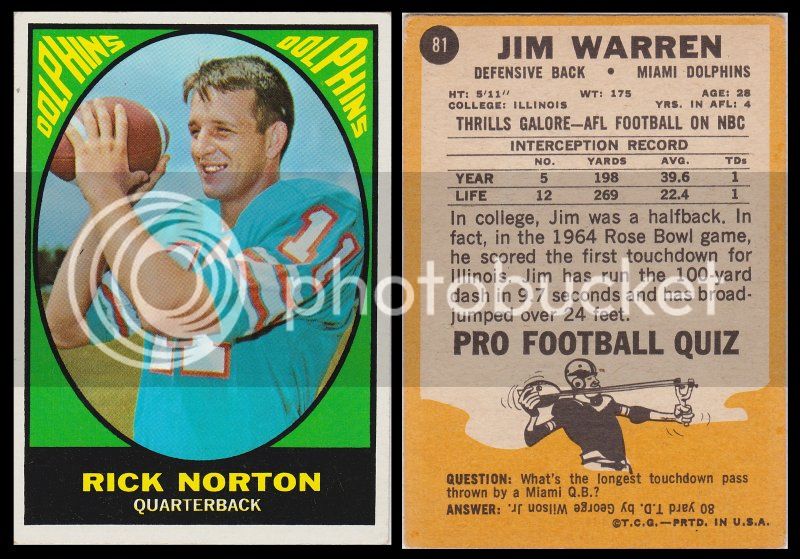 My goal was to make the fronts as original to the 1967 Topps design as possible. On the backs, I wanted an "authentic feel" but I took some artistic liberties as well. For one, I wanted to include a full career set of stats...not just one year and a career. This plus a bio left no room for the cartoon...so I don't have the cartoon on mine.

Once I had created my design...which took some time, I decided to create my first card. My goal this whole time was to create a card of a specific player. That player is former Oregon QB Danny O'Neil. He was the Ducks QB when I was a kid and outside of 3 Oregon team issues (all of which I have and are oversized cards)...he never had a card produced. I wanted a standard sized card for my autograph book. So, I created the design...and I thought it looked fantastic. I was extremely proud of what I had done.

Once the design was finished...I realized I really liked it and it had been fun. I also realized that with the way I had designed the card...it could easily be used as a template to make other players. I decided I should make a whole Oregon set. It sounded like a ton of fun. So, I set out to do just that.

I gave it some thought and I decided to create an Oregon set of players that I remember. I was born in 1985...and the earliest memories of Oregon football I have is from around 1989/90. This is actually perfect because 1989 is when Oregon made the transition from a terrible program and begin to win (1989 was their first bowl appearance in 26 years...they have only missed bowl games 4 times since). So, I decided the set would include players from 1989-present.

I decided to assemble the set somewhat randomly so the different uniforms really stand out. It has been a fun project. I am currently working on the 17th card.

I am currently in the process of testing the printing process. I have spoken with several people online about different techniques and materials. But, the next step is to go from digital designs to actual printed cards. I hoping I will get all the testing and scaling done over the next few weeks and start printing soon.

I will post the cards here as I create them...I will start with 3 today. I decided to take my original Danny O'Neil card and re-number it the #3 card in the set. I wanted cards #1, and #2 to be bigger name players in Oregon history. I felt the players I choose are the biggest two names of this era.

The Danny O'Neil below is identical to my original prototype design except the card number was changed from 16 (his uniform number) to 3.

All the cards listed below were designed and created by me. Do not post them elsewhere or use them in anyway without my permission.

Here are the cards, let me know what you think: 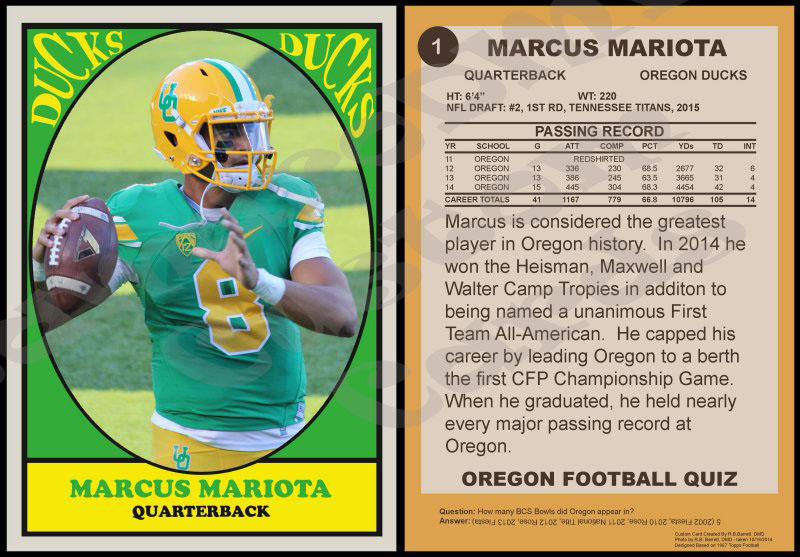 This card design is extra special because I took the photo! 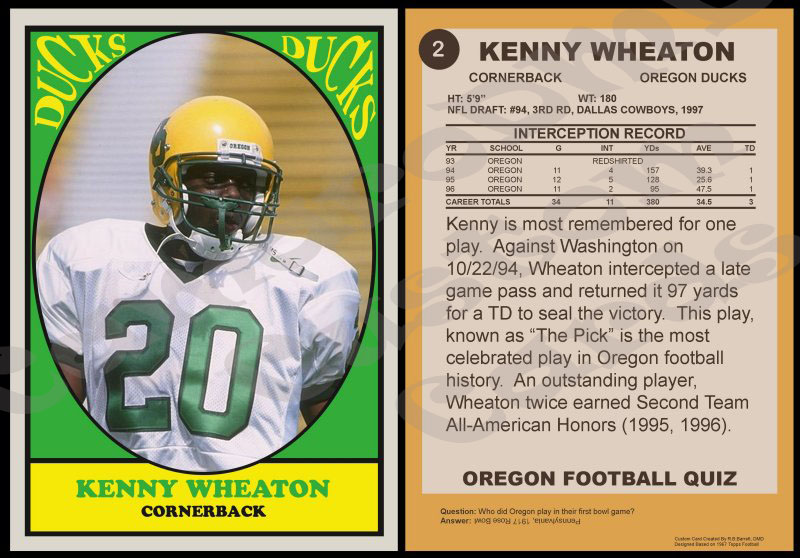 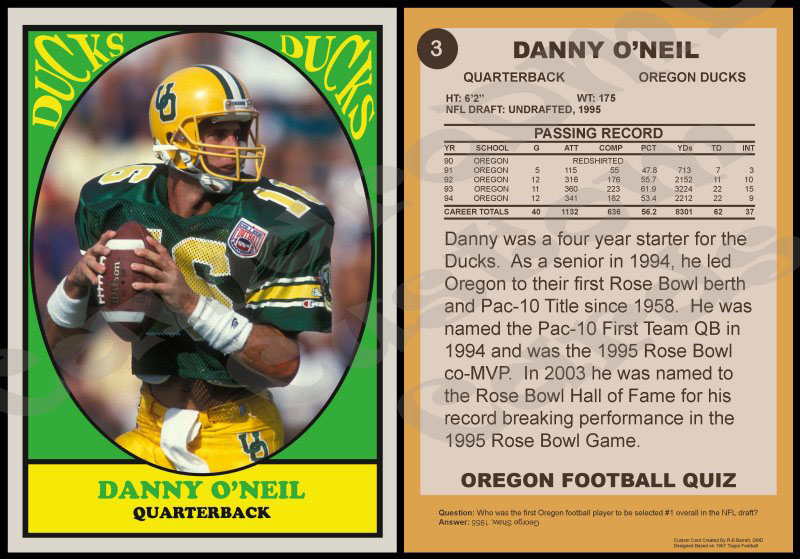 Here are the next 3 cards: 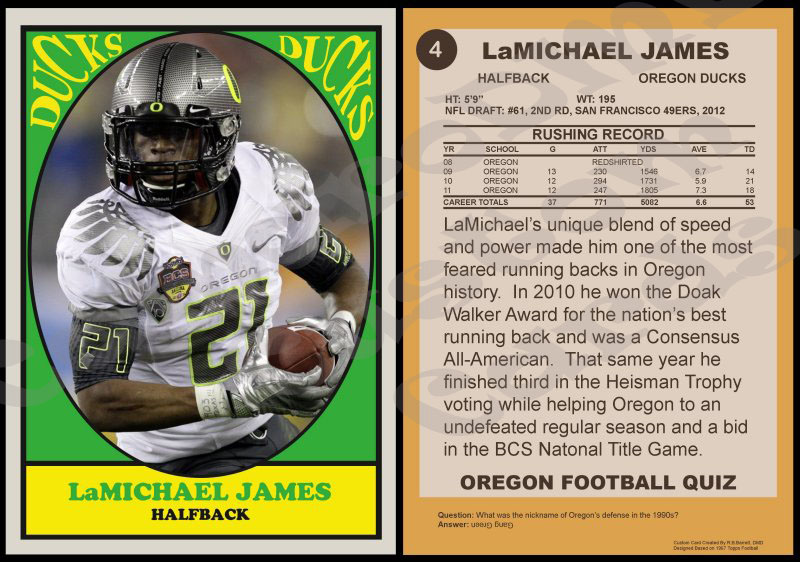 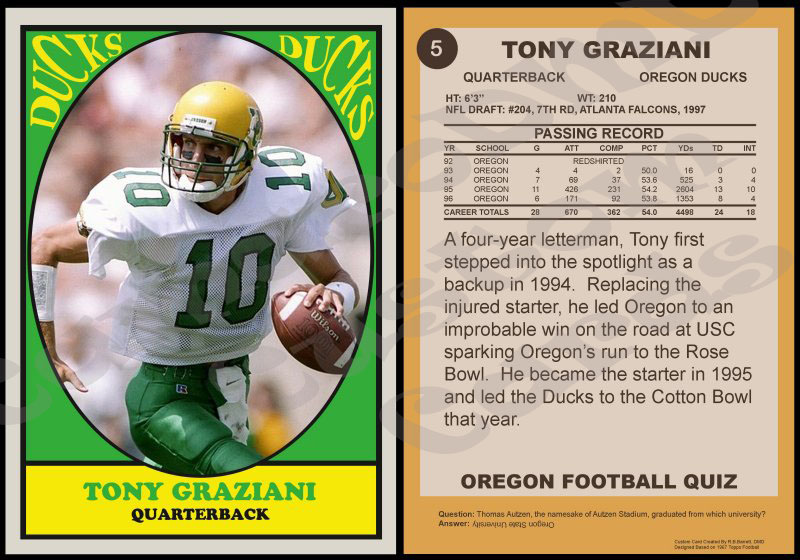 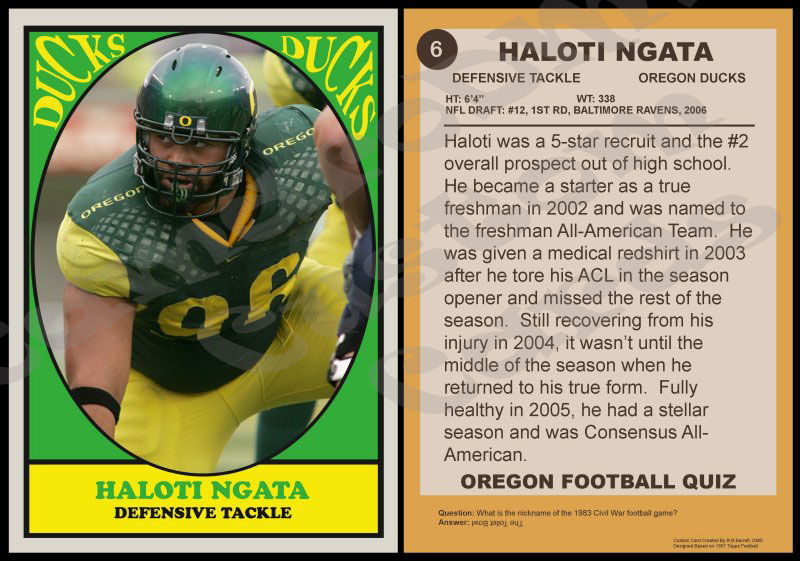 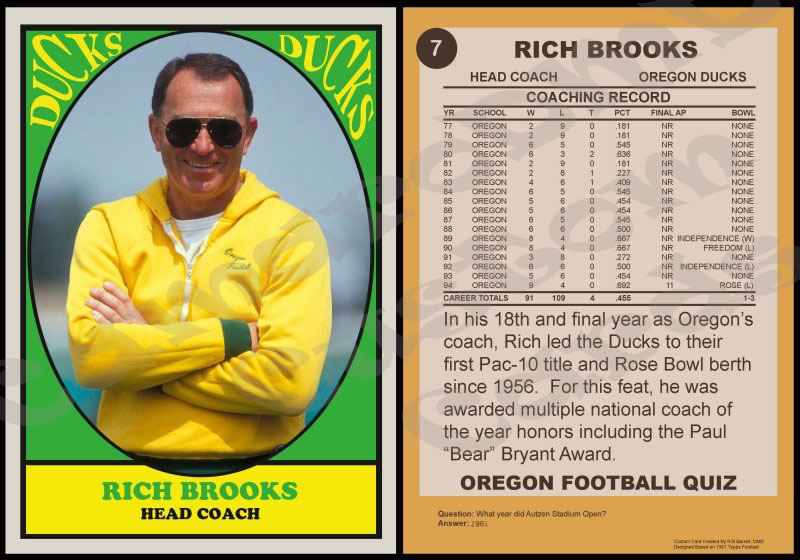 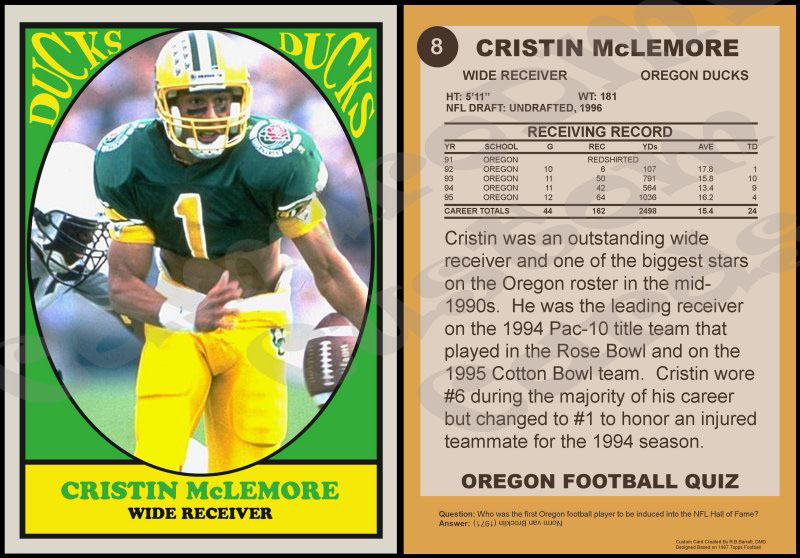 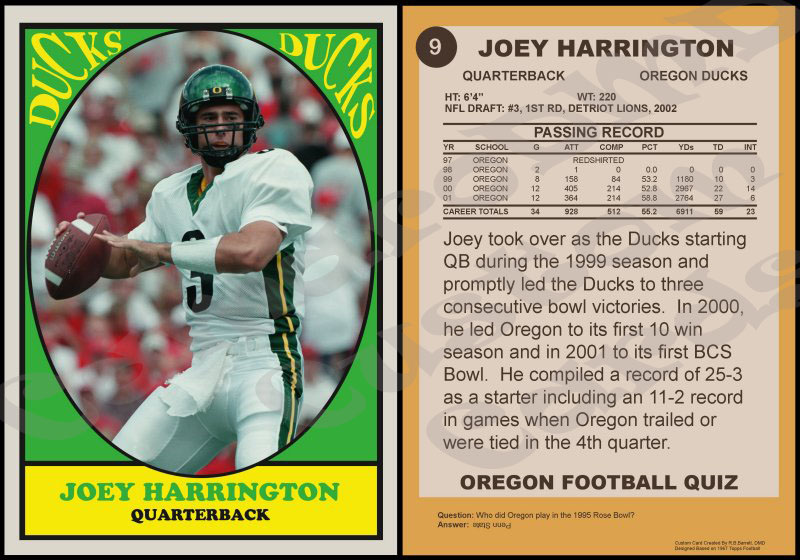 Joey was a Duck? ... how the heck did we end up with that loser Stafford?

ranbethscards said:
Joey was a Duck? ... how the heck did we end up with that loser Stafford?
Click to expand...

Yeah, he was one of the all time greats. He was known for leading 4th quarter comebacks and as a senior led us to a 11-1 record and a #2 final ranking. In fact going into the bowls, Oregon was ranked #2 in both major polls but the BCS had us as #4. They sent non-Big XII champ Nebraska to the national title as #2.

Oregon played Colorado in the Fiesta Bowl and won 38-16 (and pulled their starters late in the 3rd). Miami obliterated Nebraska in the Rose Bowl and won the national title. I honestly doubt the Ducks could have beaten Miami...but I have always felt like we should have had the chance. We were the next best team in the nation. 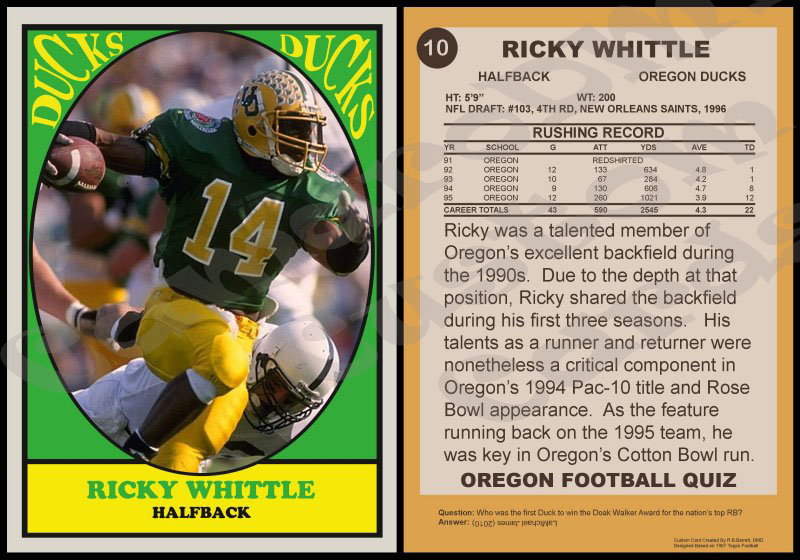 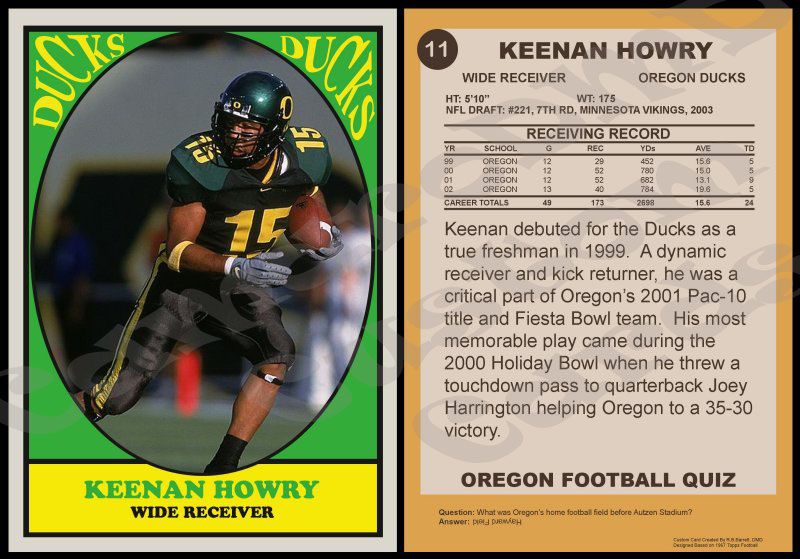 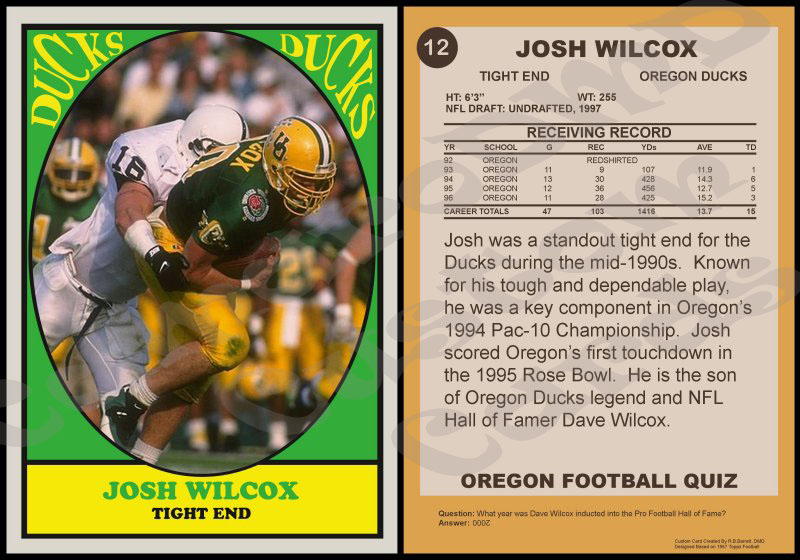 So, I haven't posted any of the Oregon cards in a while...so here is a big thread to get it all caught up. 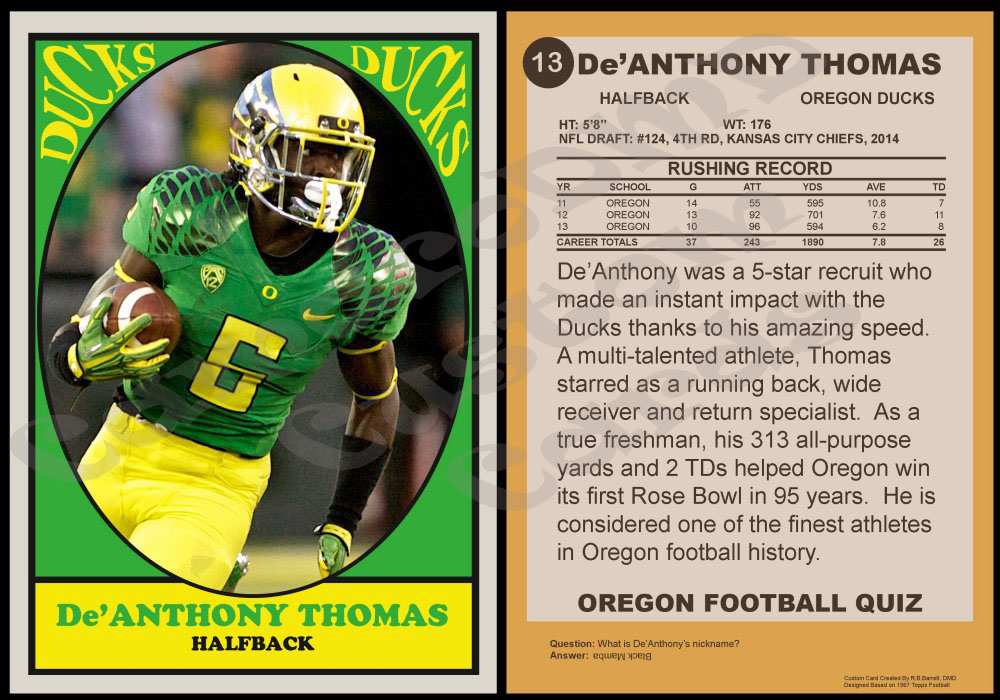 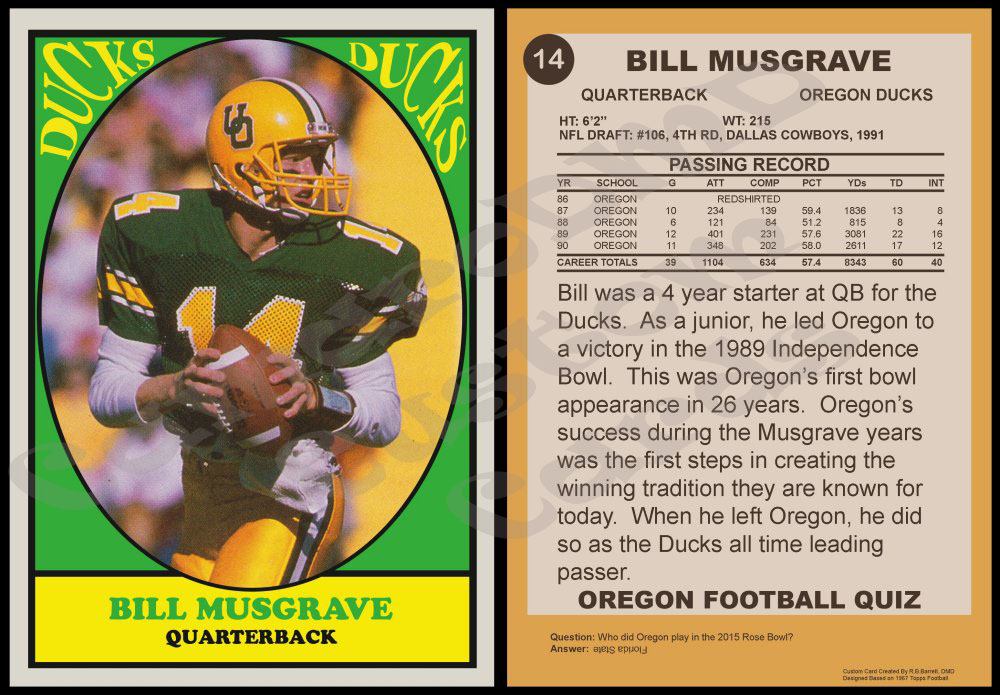 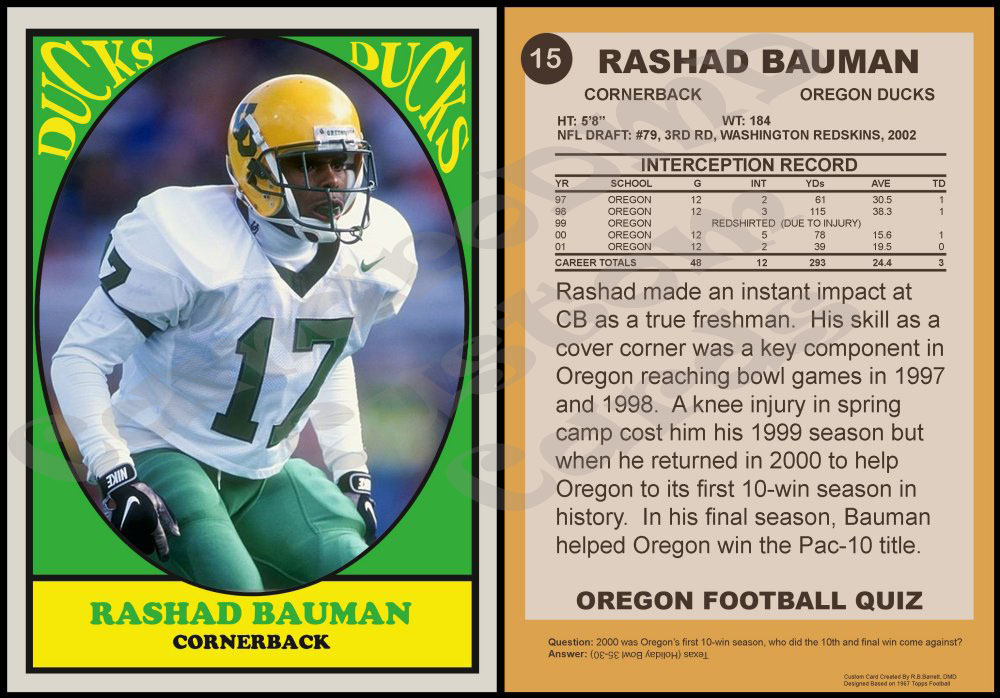 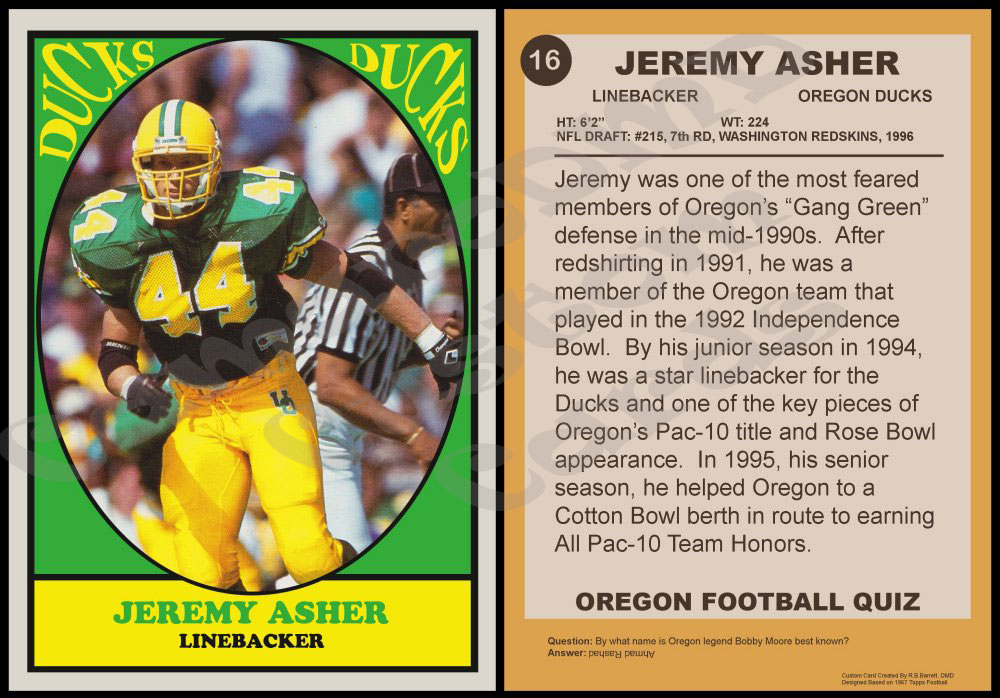 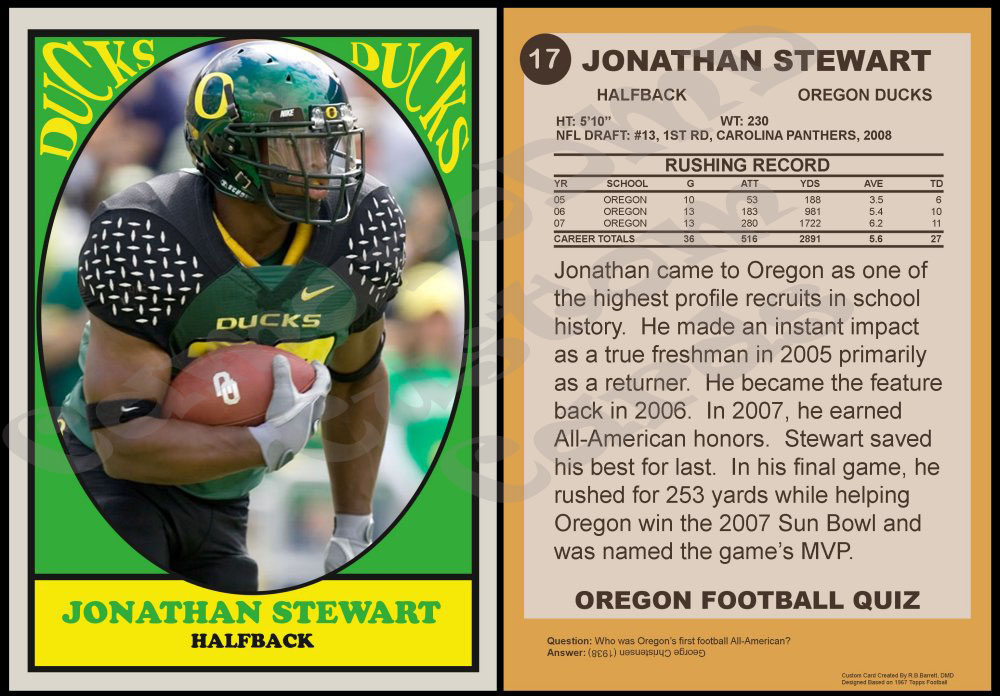 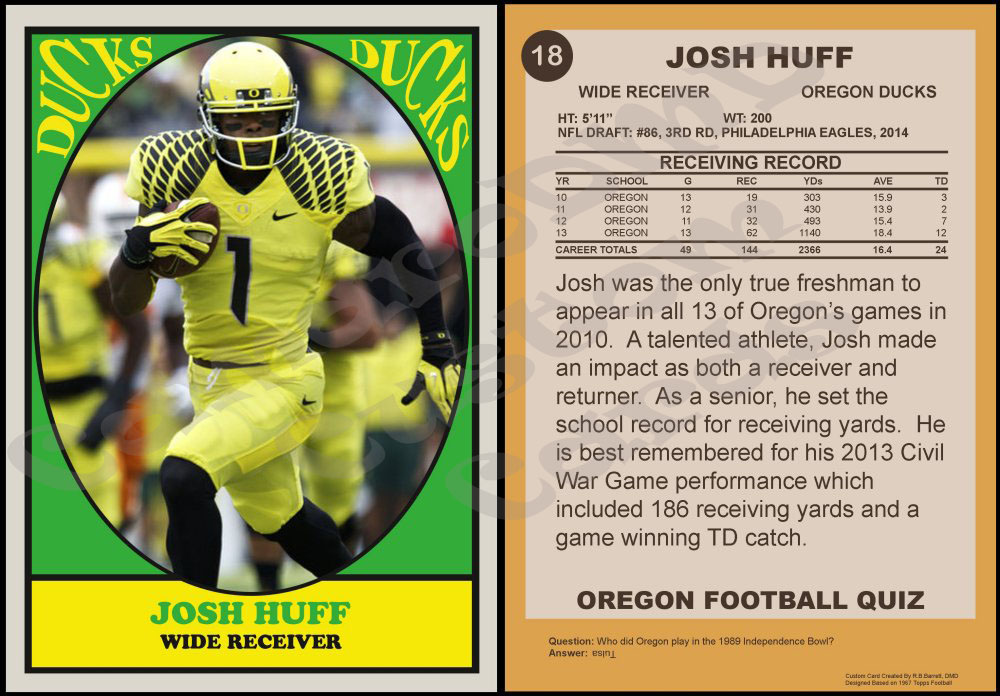 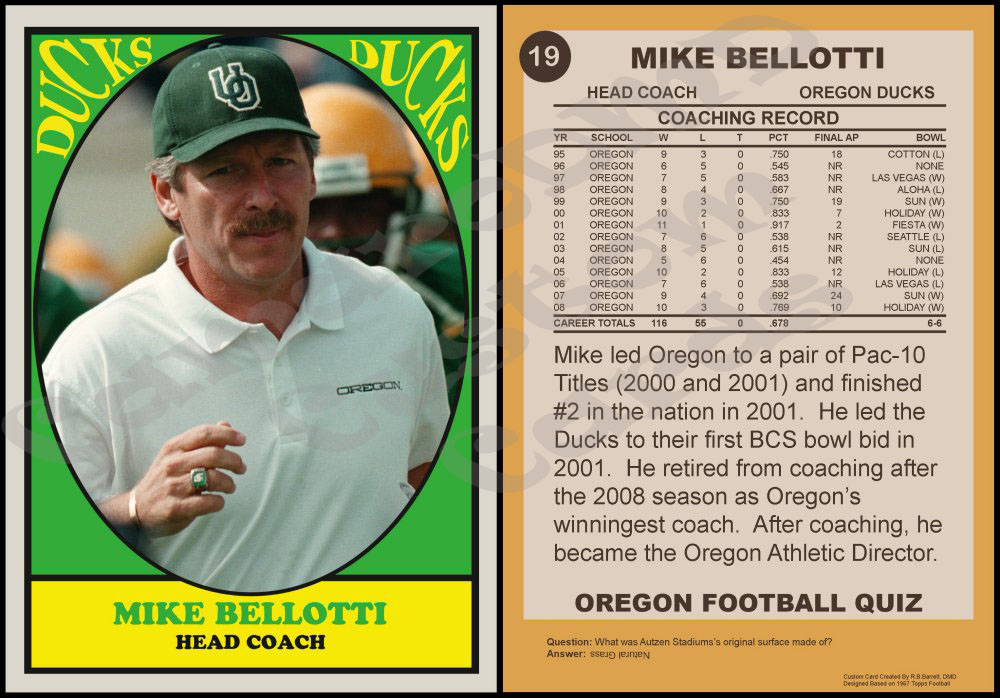 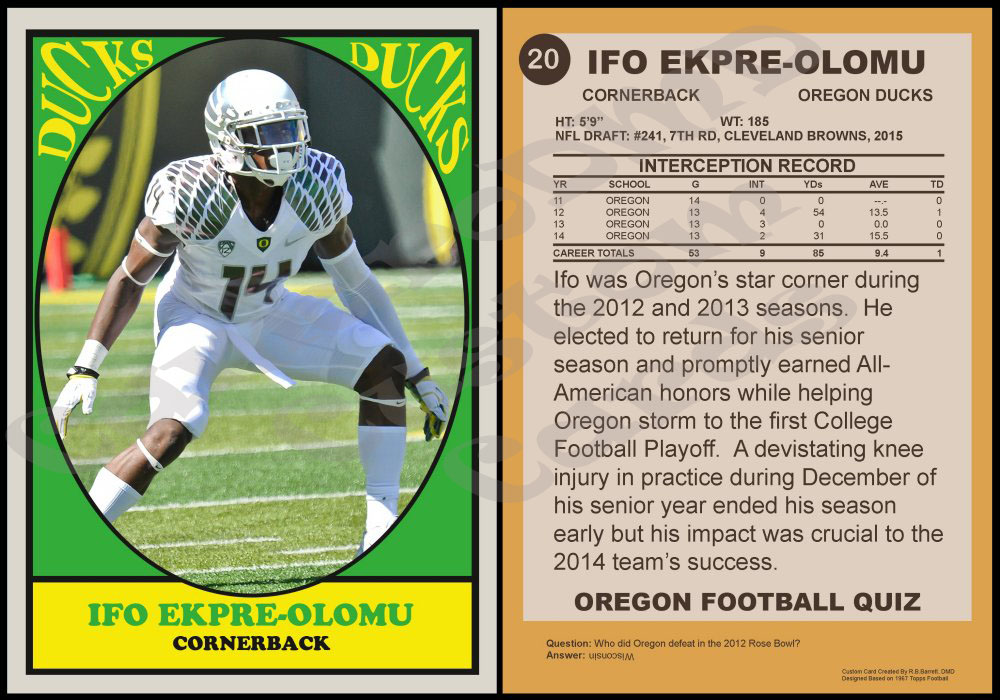 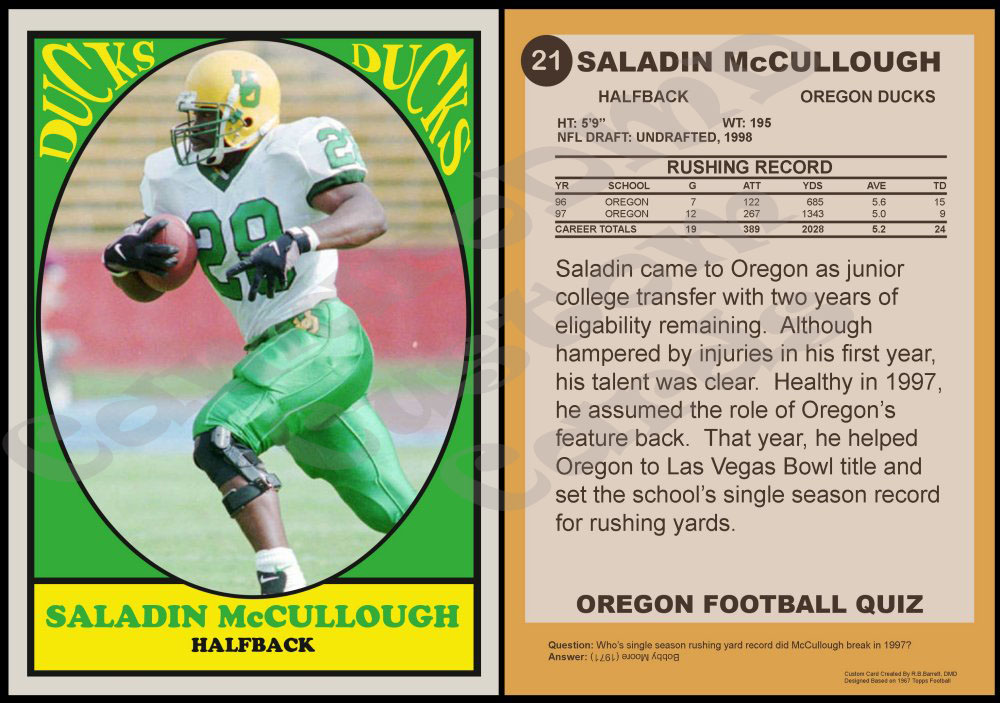 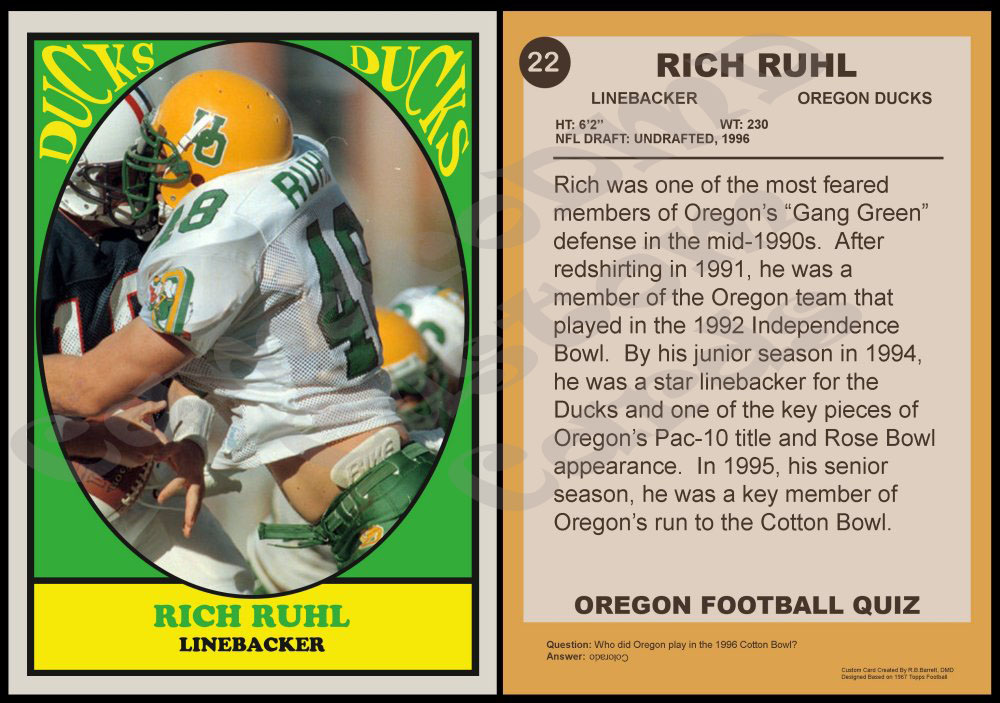 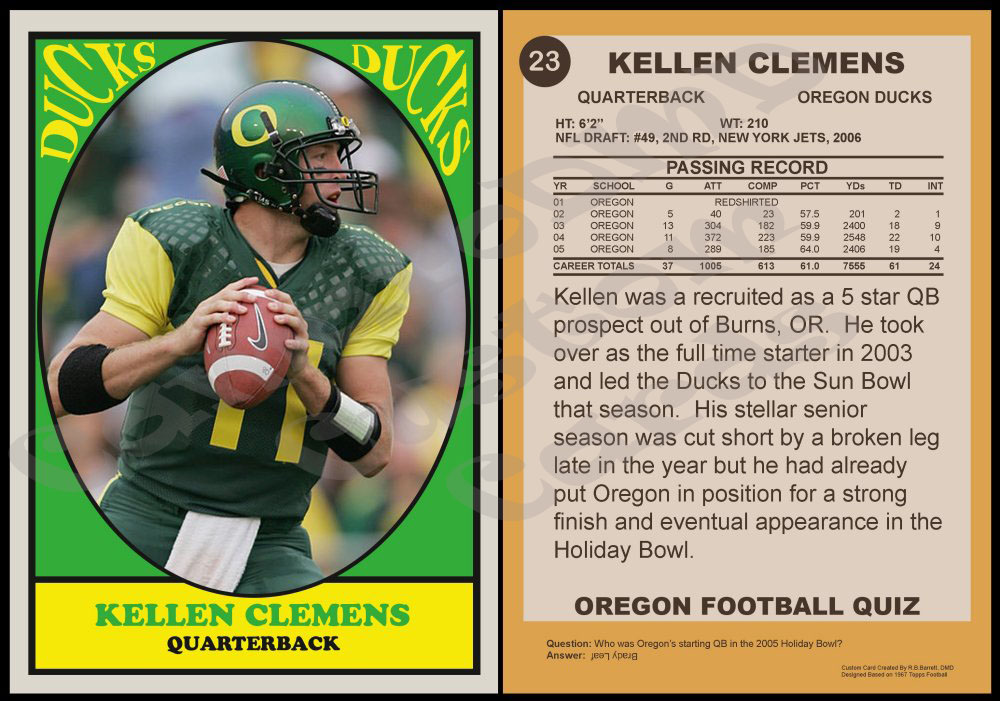 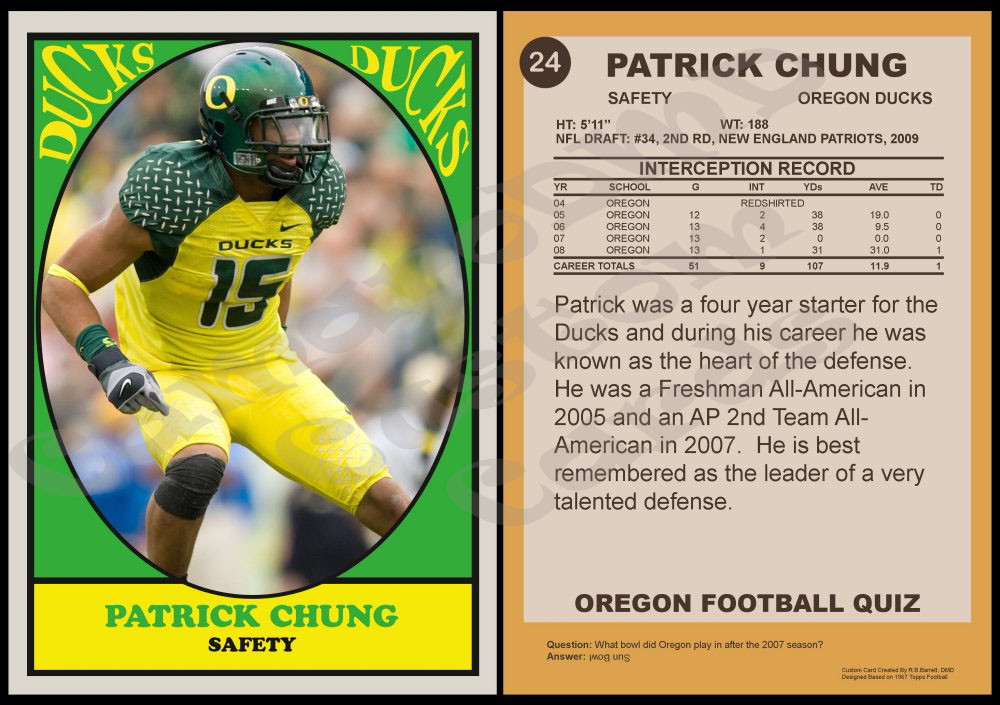 I will post more as I make more.
R

So, here's a fun update. I sent one of my custom's to former Oregon QB (and current Raiders OC) Bill Musgrave and he signed it for me. I also sent an 8x10 photo which he kindly signed as well. Not a bad day! 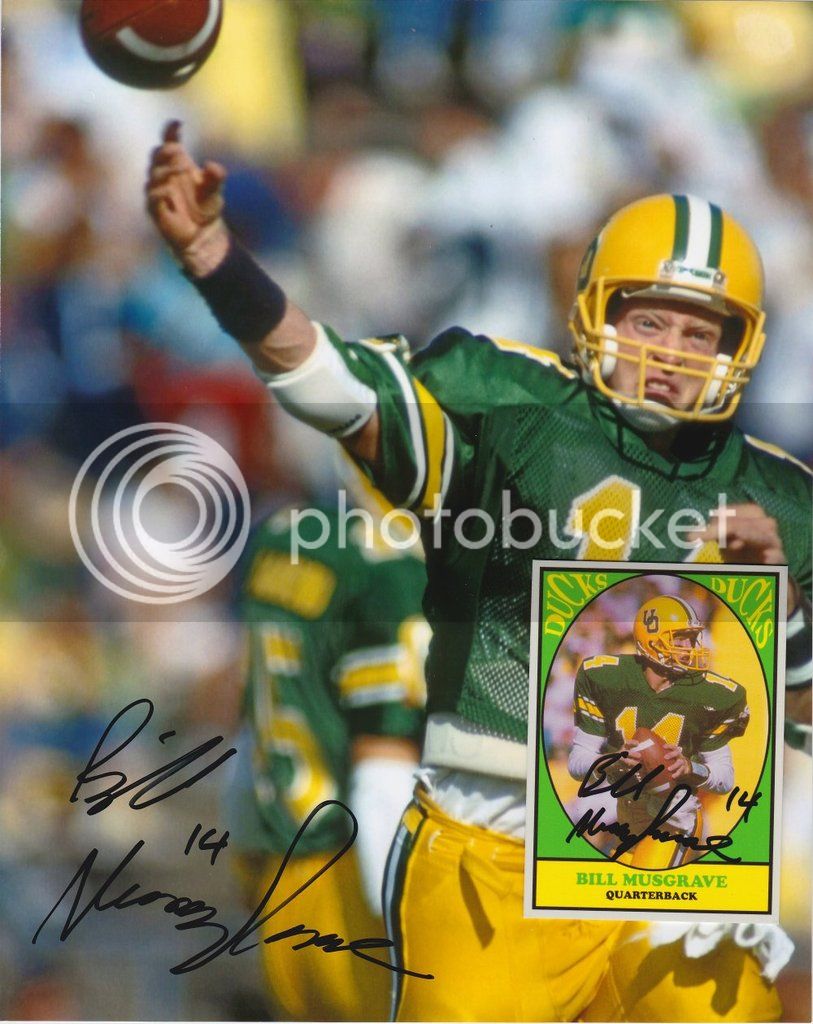 Well, I haven't been designing for a few weeks because I have been recovering from a horrible flu...just don't have the extra energy. But, a fun card came in the mail yesterday. My third custom Oregon signed card. 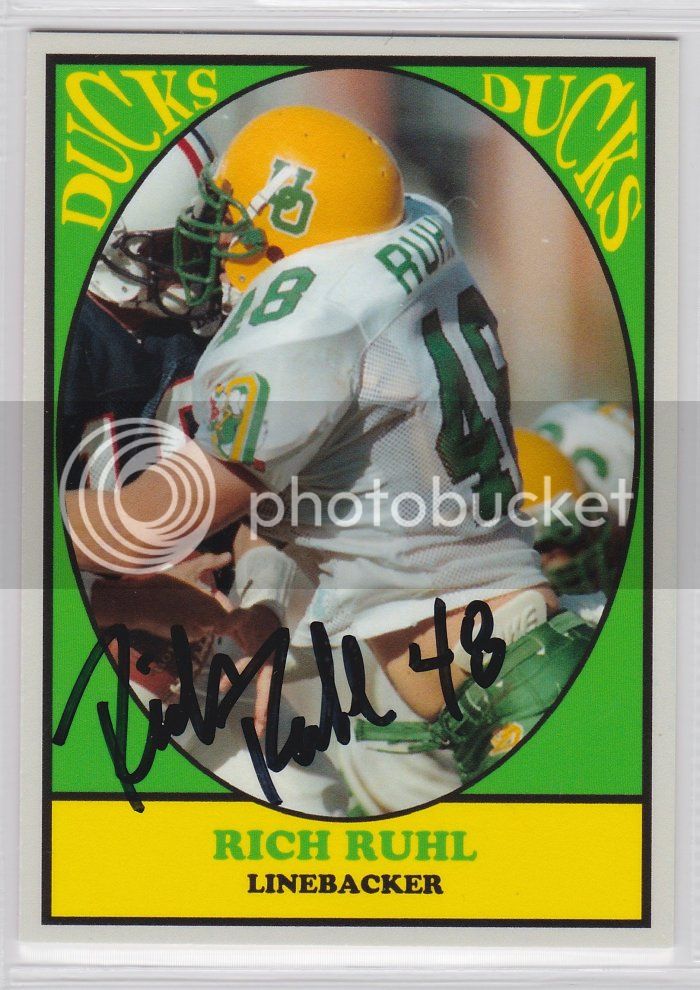 Glad to see the are signing and returning

Great job, this is a sweet looking set.

Here are a couple others that have come back signed recently. The Mariota might be an autopen...there is a rumor he uses one but it doesn't match the examples I've seen exactly. So...I'm not sure. Still a fun return. 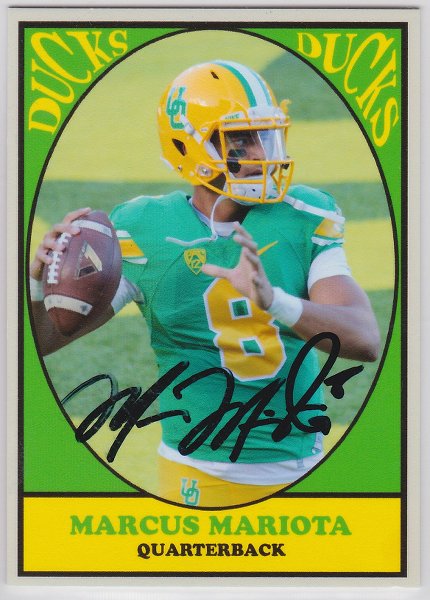 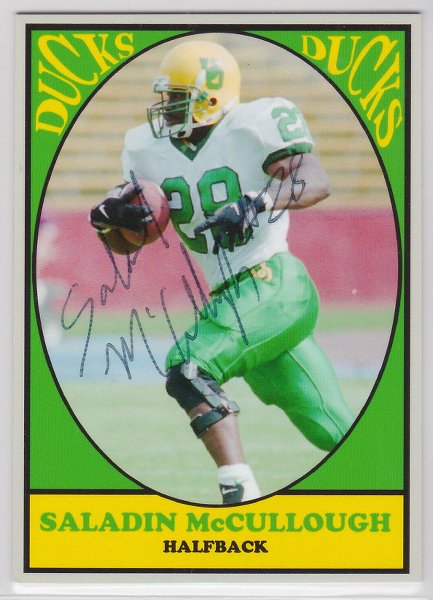 Football My Unusual Attachment to 1989 Topps