Today is John Unitas' birthday. He'd have been 80 years old. Best football player I've ever seen. Not best 'qb', best football player. Unbelievable drive and determination. He once broke his nose in a game, shoved grass into it to stem the bleeding and kept on playing.

I saw him play in person on;y one time. It was in Houston in 1970. The Oilers led late until Unitas threw a 30+ yard pass to Roy Jefferson for the winning TD. After he released the ball he turned a jogged towards the sideline. He knew it was a score. Damndest thing I've seen on a football field.

He was my hero.

Here is his rookie card. 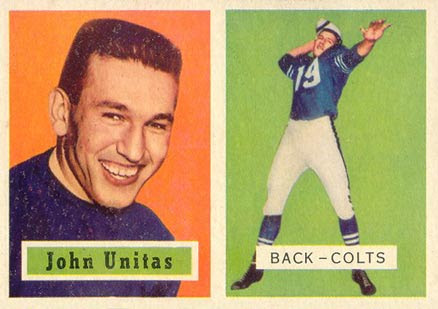 Transactions
112
5.00 star(s)
He put grass in his nose to stop the bleeding? Now that's an awesome fact that I've never heard before. Also cool that you got to see him throw a game-winning TD in your only live viewing. Thanks for sharing!

Do You Collect an Unknown Player