JERSEY CITY, N.J. (AP) -- Masters champion Adam Scott won The Barclays on Sunday after everyone around him did their best to lose it.

Scott played bogey-free at Liberty National, making only two birdies on the back nine for a 5-under 66 that put him in the mix of a crowded leaderboard at the top. Turns out he was the only one who stayed there.

''I can't believe it, to be honest,'' Scott said after winning the FedEx Cup playoffs opener. ''I just played a good round today and I came in and really didn't think it had a chance. But obviously, things went my way a lot out there.''

Justin Rose had a 25-foot birdie putt for the lead, ran it 5 feet by the cup and three-putted for a bogey for a 68. Kevin Chappell had a two-shot lead through 10 holes, only to play the next seven holes in 7-over par to close with a 76.

Tiger Woods suffered a back spasm on the par-5 13th hole and hooked a fairway metal so far left that it landed in a swamp on the other side of the 15th fairway, leading to bogey. He dropped another shot on the 15th, and then gamely birdied the 16th and 17th holes to pull within one shot of Scott. Woods' putt from the back of the 18th green was one turn short of falling to force a playoff.

The last challenge came from Gary Woodland, who fell out of the lead when he hit driver on the 13th that ran into the water, leading to bogey. Woodland had birdie chances from inside 10 feet on the final three holes, and missed them all. He closed with a 73.

''I found a way to hang in there and grind it out and gave myself a chance on the back nine on Sunday, which is everything you can ask for,'' Woodland said.

Scott finished at 11-under 273 and moved to a career-best No. 2 in the world.
It was the second time Woods has missed a playoff by one shot at Liberty National.

Woods, Woodland and Rose shared second place with Graham DeLaet of Canada, whose 65 matched the low score of the final round. DeLaet will move up to No. 9 in the Presidents Cup standings, and with one week before qualifying ends, is in good shape to make the International team.

Woods had all four rounds in the 60s for the first time in a year on the PGA Tour, though it wasn't enough. He battled stiffness in his lower back all week, which he attributed to a soft bed in his hotel room - the second straight year he has had back issues from a mattress at this event.

In a brief interview with CBS Sports, he said it was ''hypothetical'' when asked if he would compete in the Deutsche Bank Championship, the next playoff event that starts Friday on the TPC Boston. The tournament gives its charity money to Woods' foundation. Woods already missed the AT&T National this year, which also benefits his foundation.
''I just got off and I'm not feeling my best right now,'' he said.

Rose was feeling that great, either. He was in position to win the tournament with a birdie putt, and the U.S. Open champion did not want to leave it short. Instead, he knocked it by farther than he imagined, the ball stayed on the high side of the cup the whole way.
''I got too aggressive,'' Rose said. ''I thought it was a putt to win the tournament. It's tough to take.''

Scott won for the second time this year, and at least put himself into the conversation for PGA Tour player of the year if he were to go on to win the FedEx Cup. He is No. 2 in the standings behind Woods, though the $10 million prize does not come into view until the Tour Championship.

The first playoff event was packed with plenty of energy on a spectacular day across from the Statue of Liberty and the Manhattan skyline. Five players had at least a share of the lead at some point in the final round. Woods put up a great fight despite his back injury. Scott played the final 24 holes without a bogey.

Sunday also had some of the emotions found at Q-school for players whose season came to an abrupt end. And it was just as wild at the bottom.

Only the top 100 players in the FedEx Cup advance to the second playoff event next week outside Boston. Geoff Ogilvy could have joined them except for missing a 2 1/2-foot par putt on the final hole that ultimately knocked him out of the top 100.

Camilo Villegas, at No. 110, thought he needed a 6-foot par putt on the last hole to advance. He missed it and was visibly angry. More than an hour later, Aaron Baddeley appeared to be a lock to advance to Boston despite being at No. 119. Baddeley, however, bogeyed his last three holes, missing a 5-foot par putt on the 18th. That knocked him out and put Villegas back in at No. 100.

Scott didn't miss anything. He made three straight birdies on the front nine, got into the mix with a 10-foot birdie on the 14th, and then chose to lay up with an iron on the 16th hole, which played about 290 yards. He holed a 15-foot birdie putt to tie for the lead, never realizing he would be there by himself when it was over.

He was on the practice range, looking at a video board of Woodland's last birdie attempt, when he saw the miss.

''It was a good charge, but obviously I got a lot of luck, the guys struggled coming in,'' Scott said. ''I've been in their position, too. It's hard getting it done and I was playing from a position of nothing to lose today.''
Click to expand... 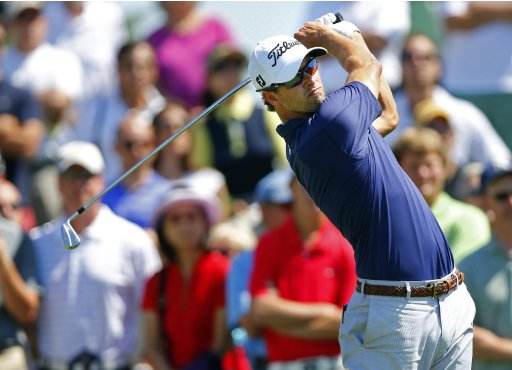 I got so caught up in the Little League World Series, I forgot about the Fed Ex. Congratulations to Adam Scott. He is quite a story and what the PGA needs.

As for the Little League World Series, a great battle between the U.S. and Japan and this time the Japanese took the win. They were all gentlemen, and it was a great game/series to watch. Congratulations to both teams and we'll see ya next year!

I actually watched this and I usually don't watch golf often. It was a good, competitive game. Scott, Woods and Woodland played exceptional. I feel bad for Chappell though, he just fell apart in the end.