I've loved football for as long as I can remember. But, I do know when I became a true die hard fan of the sport.

I grew up in Eugene, Oregon and as a result rooted for the Oregon Ducks. As a young child, I wanted to go to Autzen Stadium and watch them play. I remember asking my dad to take me over and over...and one day he did.

The date was November 20, 1993, and I was 8 years old. It was the annual "Civil War Game" and my 5-5 hometown Ducks were playing the rival 3-7 Oregon State Beavers. Neither team was very good and the weather was lousy (typical Oregon fall day...rainy, foggy and ugly) but I was thrilled to be there. On the first play from scrimmage, Oregon junior QB Danny O'Neil threw an interception that was returned for a touchdown. It didn't get a lot better from there. Both teams played poorly and we watched an ugly 12-15 loss to finish the season with a losing record of 5-6.

But, I was hooked. From that day on I was a die hard Oregon Ducks fan. I couldn't wait for the next season to begin. As luck would have it, 1994 would be something special and in my eyes was the pinnacle of Oregon football.

At the start of the 1994 season, Oregon was predicted to finish 9th in the Pac-10 (ahead of only Oregon State). The Ducks had an unusual 12 game schedule in 1994; they picked up an extra game thanks to playing Hawaii on the road. Oregon began the year by blowing out Portland State at home before dropping a pair of games to Hawaii and Utah. Oregon would beat Iowa to finish out non-conference play and enter Pac-10 play with a 2-2 record against unimpressive competition.

Oregon's first Pac-10 game came on road against #19 USC. The Ducks had not won a road game at the Coliseum since the 1970s and facing a loaded USC squad that didn't look like it would be changing. To make matters worse, Oregon's starting QB was out with an injury and their sophomore backup would be making his first career start. Beating the odds, the Ducks shocked the Trojans was a 22-7 victory.

Next, Oregon would travel to Pullman, WA to play #17 Washington State. Unfortunately, the Ducks could not maintain the momentum from the previous week and dropped an ugly game 7-21. At the midpoint of the season, Oregon found themselves at 3-3 (1-1).

Following the loss to Washington State, Oregon would shock the conference and rattle off six consecutive wins. This would include a legendary win against rival #9 Washington followed the next week by a win against #11 Arizona. The Ducks would close out the season on the road against Oregon State with a 17-13 win to seal a 9-3 (7-1) season. The win against the Beavers secured a outright Pac-10 Championship for Oregon and a trip to the Rose Bowl. It as the Ducks first Rose Bowl in 37 years.

Not surprisingly, this region was swept up in Oregon fever. I took to it like everyone else...maybe even more so because I went to the last game of the 1993 season and was so hooked by that. I think it was perfectly timed for me to become a huge fan...and then with the success they had it just swept me away.

No matter the success they have had since, that 1994 Oregon season will always be my favorite.

2019 will mark the 25th anniversary of that special season. I thought it would be fun to create a custom set to commemorate that season as a 25th anniversary set. I know I'm a year early...but that gives me time to do it right.

In the past, I have designed cards based on existing sets. I'll create a card in the design of 1987 Topps...or something like that. Sometimes I will add some artistic flair but for the most part I stay pretty true to the design.

For this set, I went in a different direction. Although not totally custom...I took some design features from a pair of existing sets and combined them to create a unique design.

The first thing I did was design the front of a player card which I will use as a template for the set. You can see it below: 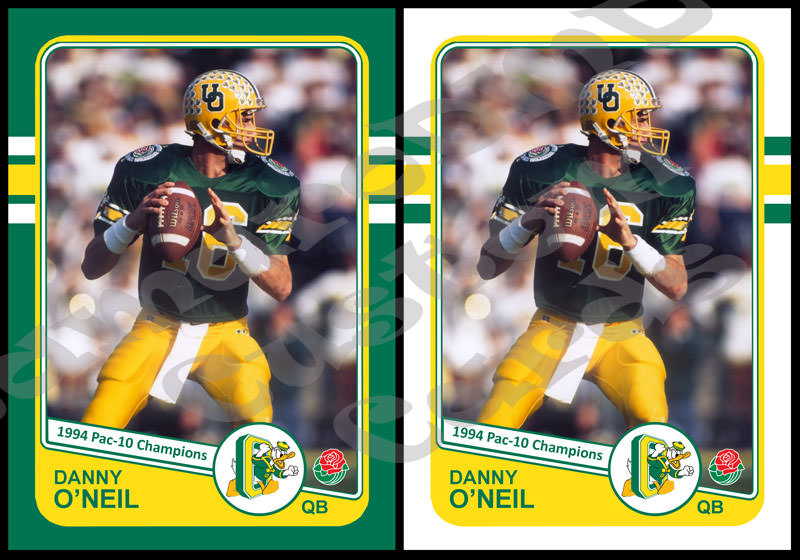 As you can see, the card has the three stripe design of 1989 Topps football. I chose to do this because I wanted it to have a pattern found on the Oregon uniform from that era. The stripes match the stripe pattern found on the sleeve of the Oregon jersey. The rest of the card background matches the jersey color: home jersey (green) and road jersey (white).

The yellow framing on the around the photo is based on 1988 Topps football...but significantly modified. I reversed the shape, rounded the corners and altered how the logo is displayed. Although some of the design elements are obviously inspired by the 1988 set, I think the card has a very nice unique look.

One other thing I want to add about the design. The truth is, this is a total coincidence that I just noticed. 1994 was the last season that Rich Brooks coached Oregon...he would move on to the NFL for 1995. He was a proponent of pride stickers for player's helmets (his replacement Mike Bellotti did away with them before 1995). The Oregon pride sticker used up through 1994 was a round white sticker with the Donald Duck through the O logo on it...just like is on the front of the card. You can see them on O'Neil's helmet in the photo.

The backs will be totally custom designed and I haven't finished one yet.

I just wanted to share an insight into my next project. Stay tuned to see the final designs released.
Last edited: Oct 22, 2018

OK, I have the first pair of cards for this set done.

I wanted to do this like a classic box set would have been done. So...I figured the first card should be a "header" card. A title or cover card to begin the set.

So, that's what I created. Then first card features a period correct photo of Autzen Stadium on the front. The photo is actually from 1999 but has the correct turf and is the smaller pre-renovation design of the stadium. The back features team leaders, the 1994 schedule, Pac-10 Award Winners, and the coaching staff. 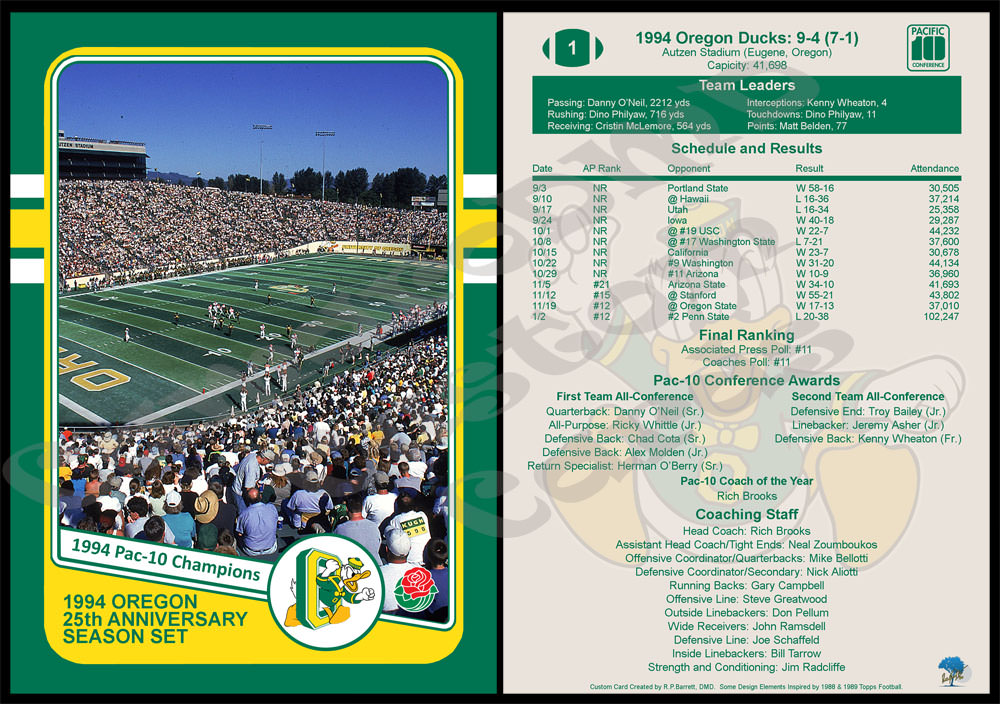 I wanted to open the set with a few cards to highlight key regular season games. There were a couple key landmark games from that season that I believe are worth a card of their own. The first is the Oregon vs. USC game which was played on October 1, 1994. 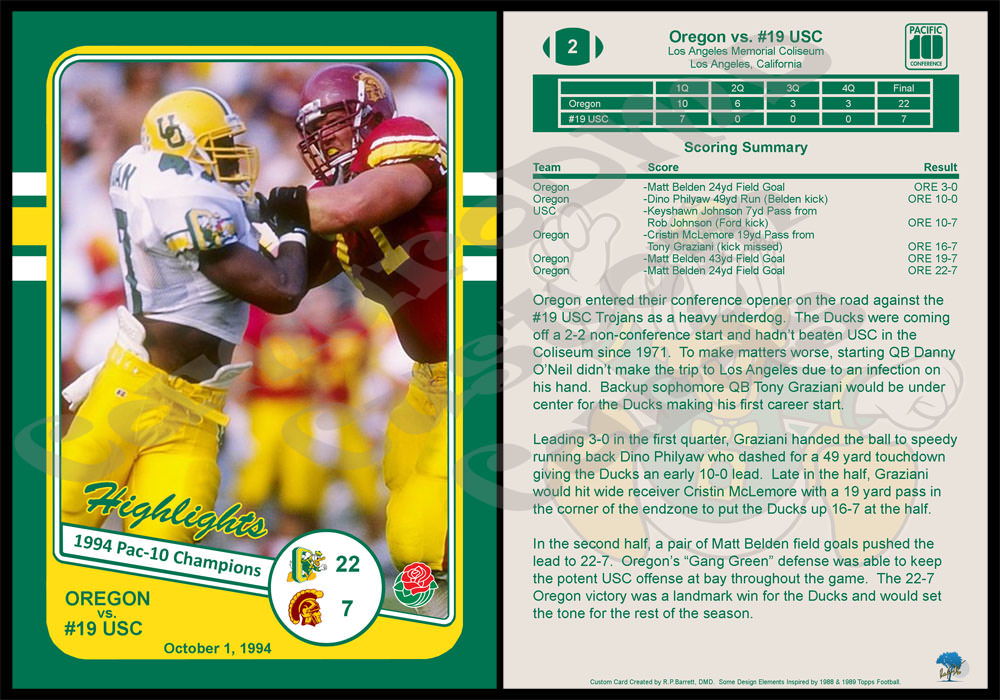 So, I finished up a few others. The next two are the continuation of the "Highlights" sub-set.

Up first is a card commemorating the 1994 Washington-Oregon game. Oregon hosted one of our bitter rivals...the Washington Huskies who were heavily favored. This was a back and forth game. Just as it looked like Washington was going to steal it at the end...Oregon CB Kenny Wheaton jumped a pass and ran it back 97 yards for a touchdown to seal the win.

This play would go down in Oregon lore as "The Pick" and the highlight is shown before every home game to this day. It's considered the greatest play in Oregon history. Here is the video with the famous radio audio: 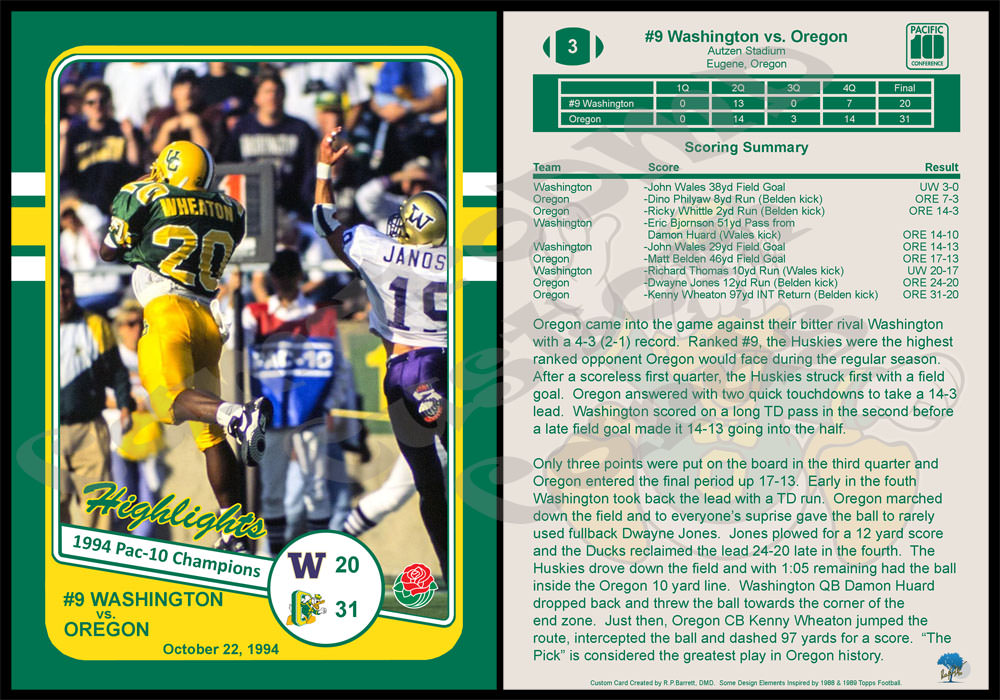 Up next is the final "Highlights" card. This one commemorates the final regular season game of the year when the Ducks faced bitter rival Oregon State in the annual "Civil War Game." Oregon would win a sloppy hard fought road game and were conference champions for the first time in 37 years. 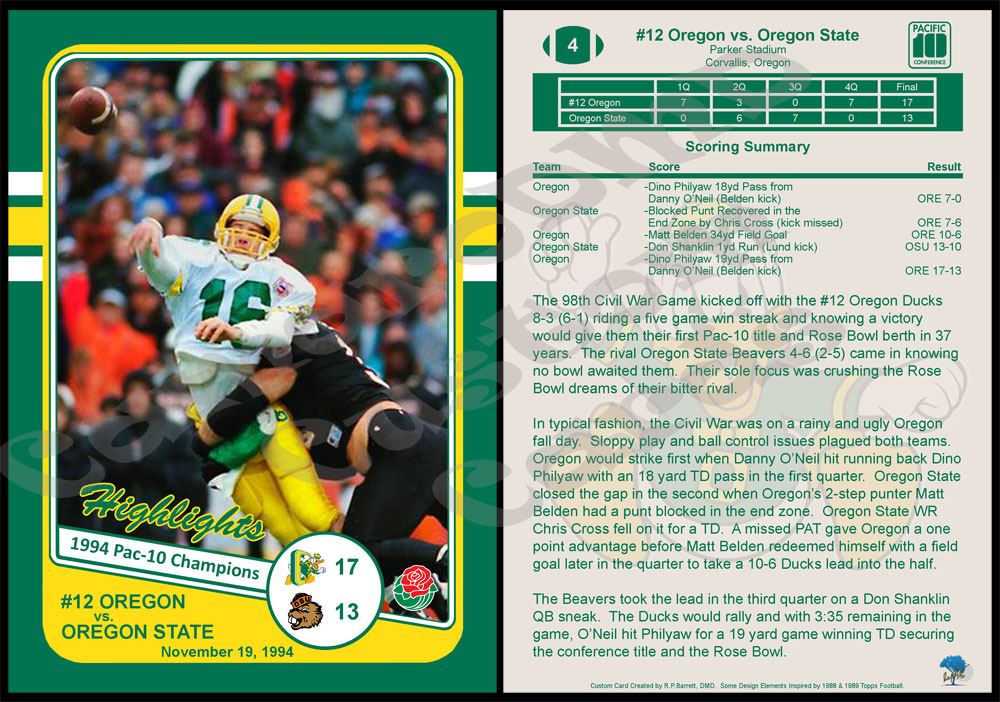 The last card for now is the first player base card in the set. Not surprisingly, it is of starting QB Danny O'Neil. The front of this card should be familiar as it was the first one designed as part of this set. 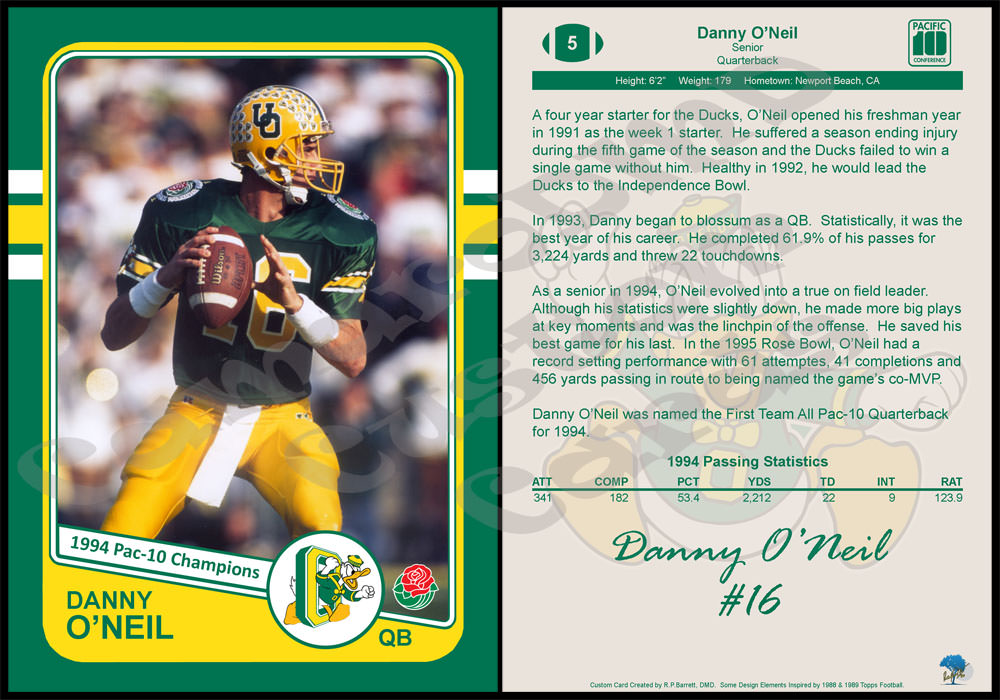 Here are a few more: 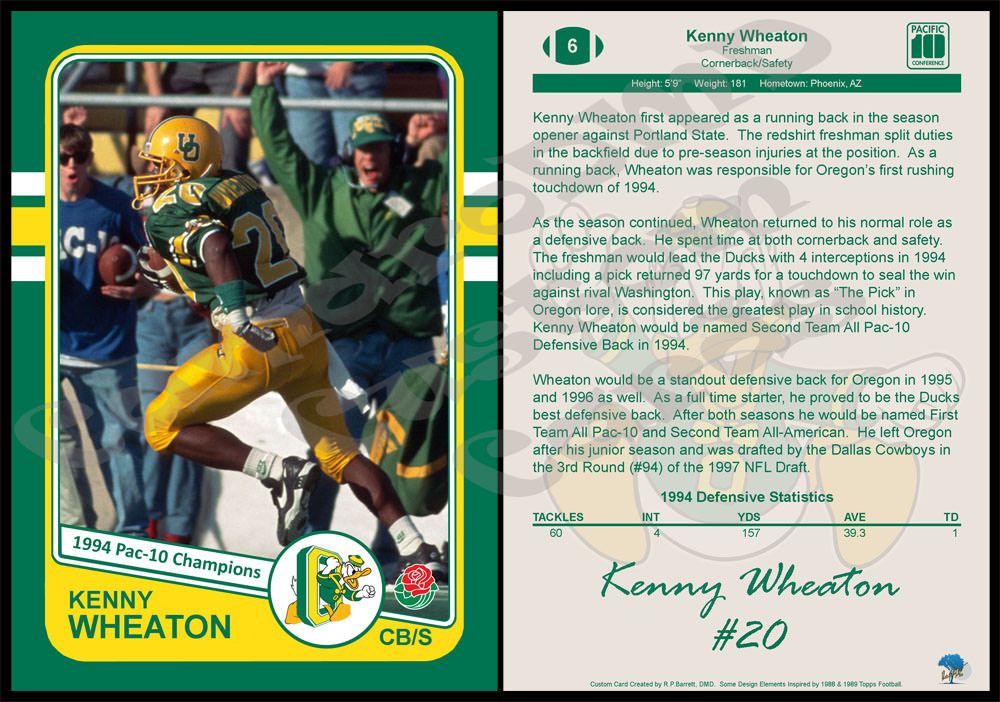 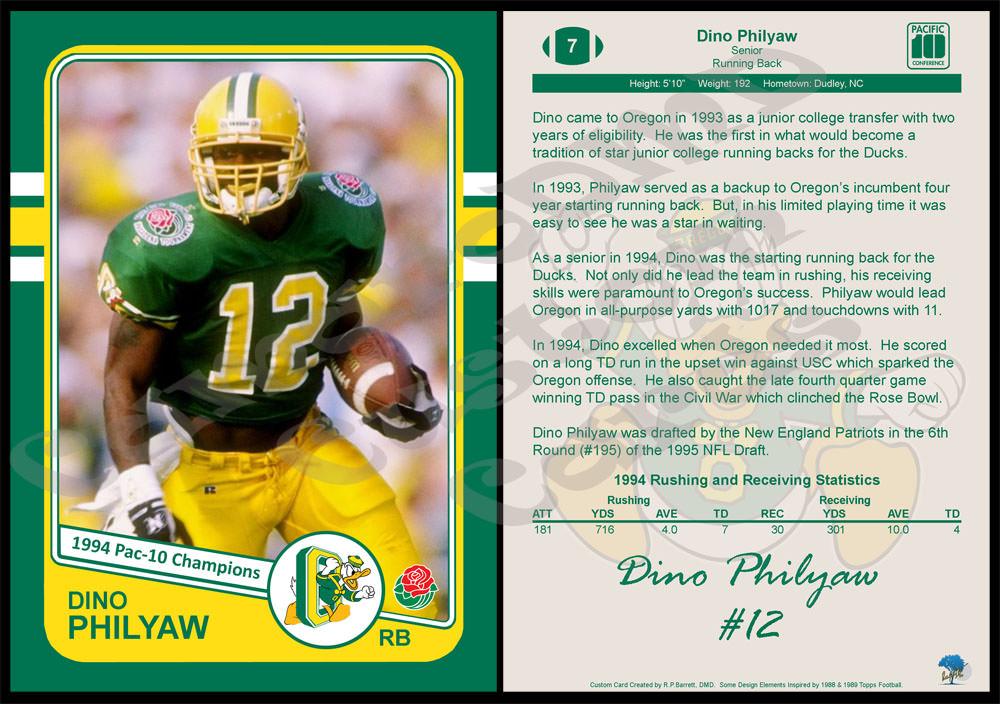 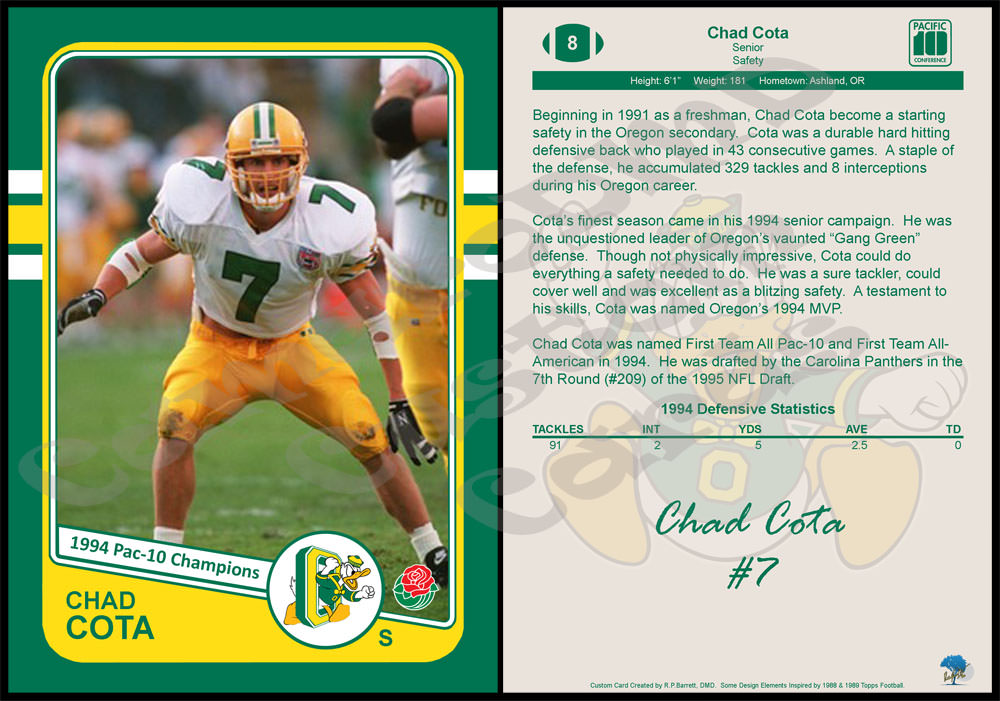