Did some shopping at A&P today, decided to get a random $1 bball pack from the vending machine. Got something I didn't really expect. Stated there were 20 cards but I got 22 (not including a checklist). Good mix of stuff, even a 1978 card of Kevin Porter. Here was the 3rd card: 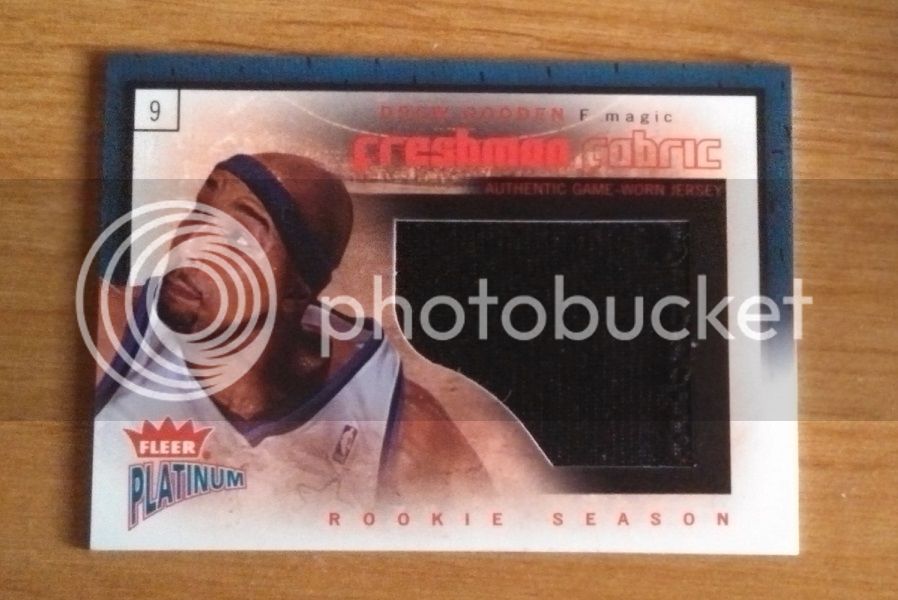 Bought a couple of these over the past couple months, was a nice surprise. Some others I got that I just had to mention...Jerome Moiso Press Pass, Shaq insert from the Magic, Mengke Bateer and Sofoklis Schortsanitis. Just awesome.

It's pretty funny, didn't know they put GU in them. Another thing...here's something maybe someone else will find interesting. I was putting away my 1992 Fleer Detlef Schrempf card. I had another 1992 Fleer Pacer card so I looked at the backs if they were from the same series. The Schrempf card # was 22 and made in 1993. The other guy was like in the 300s and made in 1992. That didn't make sense...So I look up the set. Schrempf is supposed to be #93...what the hell. Then I google it, turns out it was from a set the Drake's company put out later. Other than the card number, there is absolutely no way to tell on the card Drake's put it out, which could be good or bad. But I'm sure mentioning the food releases will bring some people down memory lane. Not me though, was too young lol.

He's talking about the name of the store. I'm pretty sure it's like a grocery store.

Mike said:
He's talking about the name of the store. I'm pretty sure it's like a grocery store.
Click to expand...

Yep a regular supermarket we had some here in Silver Spring, MD until sometime in the 1980s they ether left completely or became Safeway or Giant. I thought they were close to extinct.

Transactions: 12
Still an A&P in Myrtle Beach,SC I think lol along with a Piggly Wiggly
O

Lol yeah A&P's are a northeastern chain. Like how Publix's are down south. Love Publix btw lol.

Transactions: 12
I am to far north for publix and to far south for A&P