Whats the most mail you've received in one day?

I use to have several P.O.boxes and only checked them once a week. I would have those grayish white plastic containers full of mail every now and then. But whats the most mail you've ever received at home?

My mail carrier was able to fit all of this in my home mailbox today: 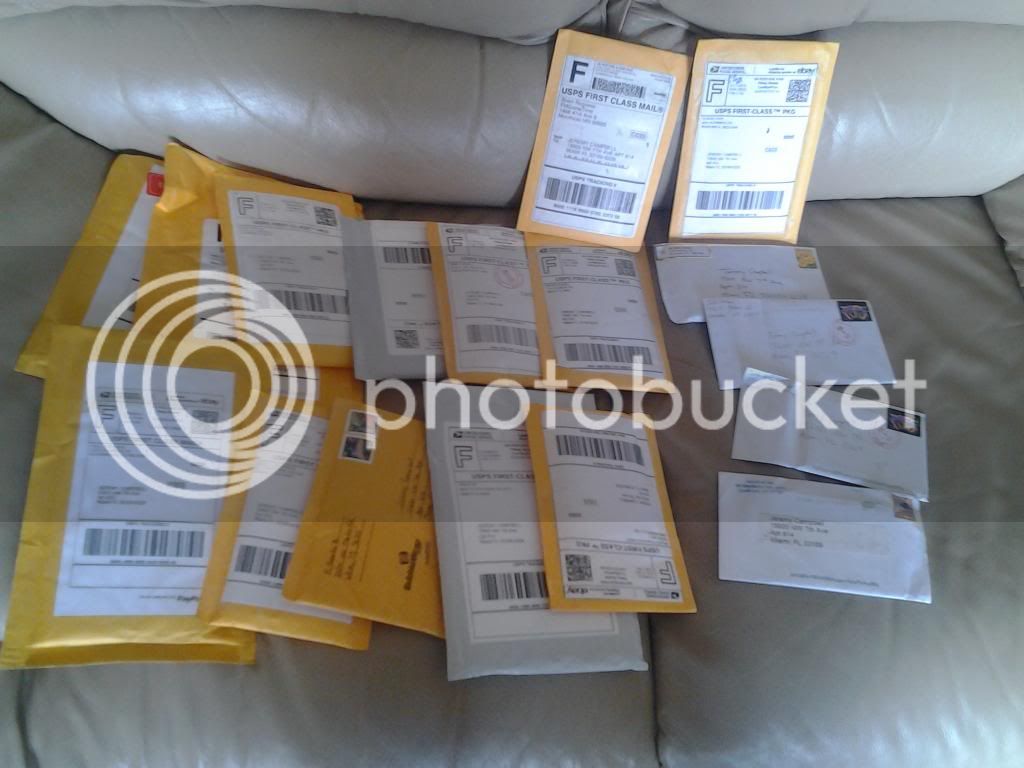 Transactions
42
5.00 star(s)
Wow that beats me. I know once I got 10 pieces: 6 were bubble mailers and the other 4 were either PWEs, an envelope of somekind or one of those what I call UPS type mailers the thin cardboard ones that range from CD sized to the large document sized "envelopes". There might have been a small box or two. I think that 10 was my largest, I sort of think once I got 13 mostly PWEs but can't verify that one. I can't do much more than that because of my breadbox sized apartment mailbox that is the box with the key for the delivery person so the top part of my box has some extra frame-work (the lock and it's bracket supports) that sometimes envelopes get snagged on.

It has been a while since I've gotten multiples.

Transactions
112
5.00 star(s)
Wow! I've never gotten more than a few packages at a time. I'd say 3 at the most. I've definitely never had a stack of packages that looks like that, I'm sorry to say!

It's mostly low end PC but makes me feel happy when I open them, lol. Freaks my wife out though and makes her start looking at our accounts.. lmao.

Transactions: 12
There at one time I was getting packages 4 at a time for 2 weeks straight between breaks and eBay. But my biggest had to be 12 in one day the postman honked the horn and just motioned for me to come out.Yea my wife hits the accounts to see how much her shopping spree will be lol

Transactions: 15
I think the most I've gotten was 6 packages,,,but this last one was just one,but it contained like 45 cards

Thats alot. I think most i have has been maybe 6-10 been a long time since any days like that.

To verify (and to contradict) whatever I said up above here is a recap of that 10 package mailday I had back two years ago (plus 6 days) Sorry no visuals:
------
On Thursday (16 Feb 2012) I had a ten package mail day, 3 or four were small envelopes but there were 10 in all. Most was from a huge sportlots order and auctions from there, one small box was from an Ebay purchase and one package was from a trade with a member at another card forum the sportscard one that isn't the freaky one. He sent 70 Orioles and Nationals cards that were unevenly leaning the O's way about 60/10. Now I've got to gather up some Red Sox to send his way. I'll post the contents from that package on my TCC Blog (link below in my sig somewhere) probably sometime later Friday evening. Anyway here is all the other stuff with the main attraction at the end.

For easier reading and awesomeness I have listed everything by sport/chronological order instead of package by package.

So here is the trade stuff I got Thursday (16 Feb) from the SCF member who lives in Germany. (Now I've got to send a lot of Red Sox his way). Some of them I already had some maybe had come from him the last time we traded. This list has 70/71 cards so it will be long and a bit messy maybe forgive any mistakes. As I said before there were more O's about 90% so I will only mention the team on the Nats cards.

Transactions: 1
not sure the most ive gotten at one time, but my mail ladies are real good about coming to the door for stuff...

I know the biggest outgoing mail I had was over 50 bubbles....

and I have had the trifecta a couple times, UPS, FEDEX, and USPS all coming to the door in the same day...

and I have had the mail lady leave one of those tubs on the porch, but it was 5 text books...gotta love books that are half the price of the book store that are on eBay, plus I had a class that had 8 books

A post office plastic container full of mail.
A

I think ive gotten like 10 in a rubber band at my doorstep but nothing like that J!