Special Selections from My Collection

OK, here is this week's card (and a few bonus cards below): 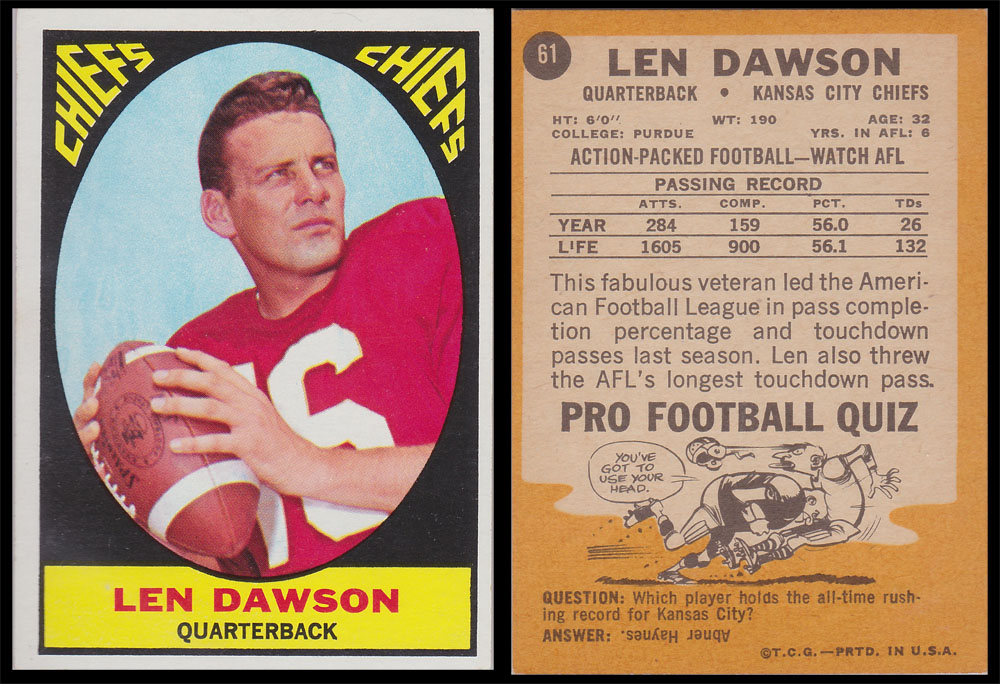 1967 Topps football is my favorite set. When I was a kid and I would flip through the Beckett football magazine and dream of collecting some of the vintage sets...1967 would be the set I would drool over. I just loved it. I loved the classic oval design, I loved the colors, I loved the story behind it being AFL only. I also loved the history of the upstart AFL. It really was an epic set to me.

One day, when I was a kid (probably middle school or so)...I visited my local card shop and in the case was a 1967 Topps card. It was the first card from the set I had actually seen in person, previously all I had ever seen were pictures. I thought it was better than I could have imagined. Not just any card either, but Hall of Famer Len Dawson. Although not a key card or anything...it was a gem to me and it was affordable (I'm guessing $20 or so). So, I bought it and for many years it was the only 1967 I owned. That made it very special to me. The card above, is that very card...I still have it.

If you look past my supremely biased view of 1967 Topps...the set does have some flaws. Yes, it is a very eye appealing set (in my opinion)...but beyond that it is lacking. Prior to 1964, the Philadelphia Gum Company signed an exclusive agreement with the NFL to produce their football cards...this left the traditional powerhouse company Topps out in the cold. So, Topps was forced to find another topic if they wished to produce football cards. As a result, they began to produce AFL only sets for the next four years. 1965 gets all the acclaim for this...they are the "tall boy" cards with tons of SPs and the Namath rookie. That is the big football set from this era.

I honestly believe that 1967 gets overlooked and is under appreciated. By 1967, the AFL sets had been done. Topps had produced them for 3 years already and they are pretty much "old news." The set also lacks any major rookie cards...a staple for a popular set. In fact, the only desirable rookie in the whole set is the Wahoo McDaniel...it was his only football card ever produced. As many know, Wahoo would go on to become a famous professional wrestler. Outside of the "typical" popular AFL players from the era (Jack Kemp, Joe Namath, ect.) the set really is lacking.

When I finished dental school, I decided I needed to put this set together. It would fulfill a lifelong dream. So, over the course of a year I did just that. It's a lower grade set overall...probably VG-EX average. It does have a few Milton Bradley cards mixed in...but that's OK. The Namath (my favorite card in the set) is among the lower grades but I do plan on picking up a high grade example down the road (probably PSA graded). But, it was a fun project and the first vintage set I ever assembled.

Here are a few key examples from the set:

wow... now that's some old school stuff there... I was lucky enough to see them all play... and in Wahoo's case... got to see him go on to be one of the biggest named Wrestlers of all time.

And Namath?... he made pantyhose a household word... lol

ranbethscards said:
wow... now that's some old school stuff there... I was lucky enough to see them all play... and in Wahoo's case... got to see him go on to be one of the biggest named Wrestlers of all time.

And Namath?... he made pantyhose a household word... lol
Click to expand...

All very much before my time...but I find all the history fascinating.

To my generation...Joe Namath is the old Jet who tried to kiss Suzy Kolber, those of us who remember Kemp probably think of him as Bob Dole's running mate...and even I hadn't heard of Wahoo until I started researching this set when I was a kid (although professional wrestling was never my thing). 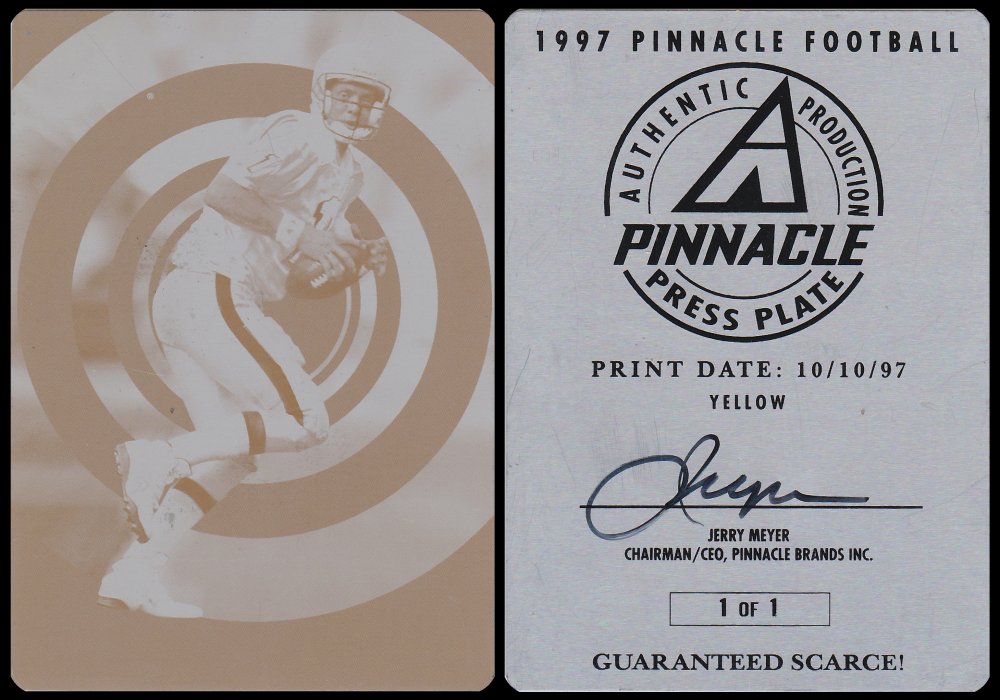 This is a relatively new card (if you can really call it a "card") in my collection. I picked it up recently because I am a big fan of Drew Bledsoe. He was a local Pacific Northwest guy who had a heck of a career...even though his greatness sometimes gets forgotten because he was replaced by Tom Brady. This is one of only 3 1/1 cards in my collection and one of only 2 printing plates.

This card is special to me for a few reasons. First, it represents a maturing in my collecting philosophy. I stopped collecting cards in the late 1990s as I approached high school in part because it was getting to be too much. Different companies were coming up with so many gimmicks...super SPs, ultra expensive products...that someone like me who liked to collect complete master sets or try and track down all the cards of a given player simply couldn't achieve their goals. It stopped becoming fun for me once I was unable to work on master sets...so I stopped collecting. I would be away from the hobby for nearly 20 years. I returned with a different mindset...that I don't have to collect everything. To set smaller goals and enjoy completing those. You don't have to find an example of every card for a given player to feel accomplished (not that you can with modern cards anyway). This card was exactly what drove me away from the hobby...and now I am seeking them out.

Next, as I already mentioned...I was a big Bledsoe fan and love to grab anything with a super low print run that I can afford to pick up. It helps make my collection more unique.

Finally, I really like cards with some kind of "history" behind them. This card was produced right at that time when I was getting frustrated and about to leave the hobby. I mentioned too many gimmicks...too many unobtainable super low SPs (like this card). At this time, different card companies were in an "arms race" to come up with new ideas to make their products stand out. One of the most innovative was Pinnacle...they experimented with a ton of different packaging techniques and new ideas for cards. One of the ideas that stuck on long after Pinnacle folded was printing plates. In 1997, Pinnacle was the first company to insert their printing plates into their products as special 1/1 issues. Originally, all the Pinnacle printing plates released were signed on the back by the Pinnacle CEO (possibly all the plates released that first year). Although Pinnacle would fold a short time later...this innovative idea would have major repercussions throughout the hobby and is still a staple today.

This card is one of those first issues...one of the 1997 Pinnacle plates signed by the CEO that started it all.
R

nice card! okay, I know I'm gonna take heat from the "Brady Bunch" for this... but without Bledsoe, the Patriots would not be the team they are today...

yeah, yeah, yeah... tell me how great Brady is... but you have to remember he learned alot playing backup to this guy!

ranbethscards said:
nice card! okay, I know I'm gonna take heat from the "Brady Bunch" for this... but without Bledsoe, the Patriots would not be the team they are today...

yeah, yeah, yeah... tell me how great Brady is... but you have to remember he learned alot playing backup to this guy!
Click to expand...

I think you are completely right. He learned a lot sitting behind him...and it gave Brady time to develop as well without a ton of pressure. People forget how good Bledsoe was because of what Brady has done. I think (and I could be mistaken)...but when Brady took Bledsoe's starting job Bledsoe was the highest paid player in the NFL.

OK, here's a card for this week: 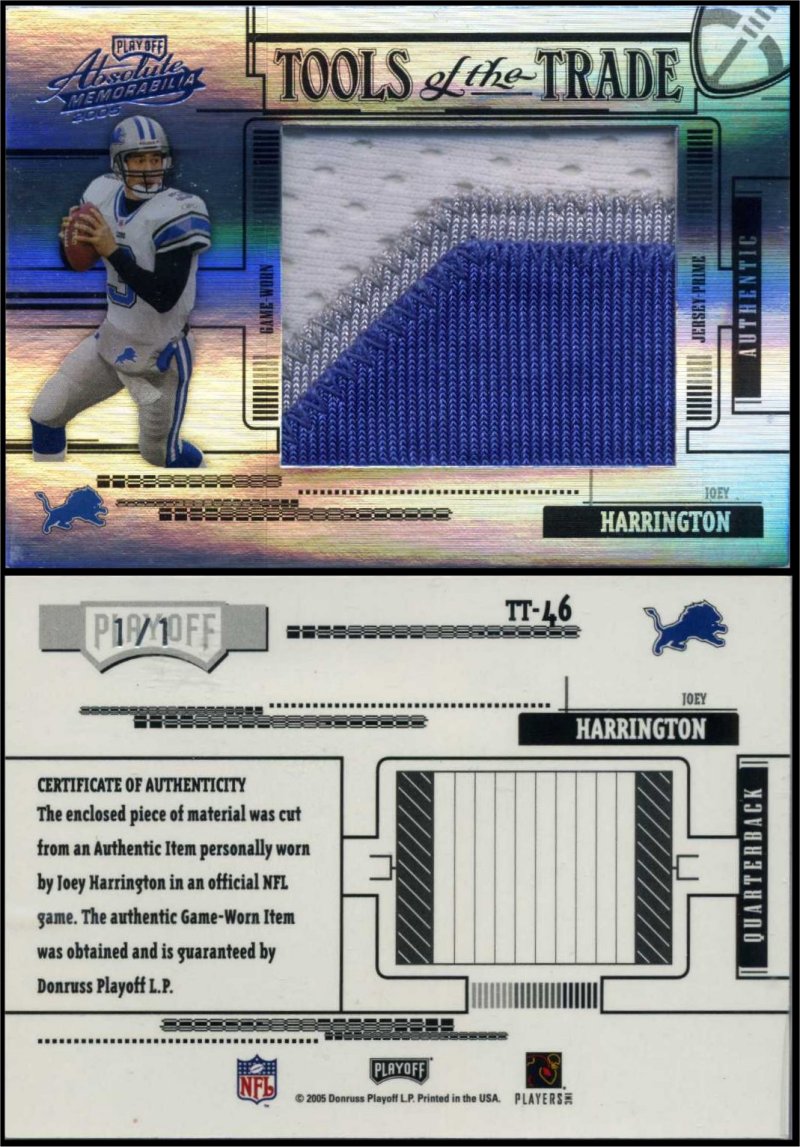 This is a card from the first PC I worked on after getting back into the hobby in 2010 or so. This is also one of only three 1/1 cards in my collection...and my sole non-printing plate 1/1.

I was a big Joey Harrington fan when he was in college because he played for my hometown Oregon Ducks. I was in high school when he starred for Oregon. When he got to the NFL, I followed his career very closely. Although it didn't turn out like we had hoped, I still consider him one of my all-time favorite players.

One of the first collecting projects I embarked upon when I returned to collecting was a Joey Harrington PC. By this time, he was already considered a "bust" and as a result, the majority of his cards were very affordable. I focused my collection on autos, low print SPs and multi-colored (preferably 3-color) jersey cards. This is one of the centerpieces of that collection.

OK, here is this week's card:

This is a common card from this set. It's low grade and nothing overly special. However, this is a card from a set that I have always adored from a far. I had never even seen a card from this legendary set until I picked this one up recently. When I got the card in hand, I was floored with how cool it really was. I absolutely love it.

It's a long term goal, but I hope to one day assemble a lower grade set complete set of the 1965 Topps "Tallboy" cards. I'm hopeful, this will be the first card in that set.
R

So, last week was crazy and I didn't get a chance to post a card...so I will post two today.

The first is of a player that I have always been fascinated by. Although he played long before my time (in fact, he died with I was 7 months old)...I have always been amazed by his story and I believe he belongs in the Hall of Fame.

Recently, I found a copy of his rookie card for sale. It was damaged (someone had written in pencil along the top of the front and then erased it)...but for $28 I had to pick it up. I had always wanted one of these...and I might pick up a nicer example in the future but for now I am thrilled to have it. 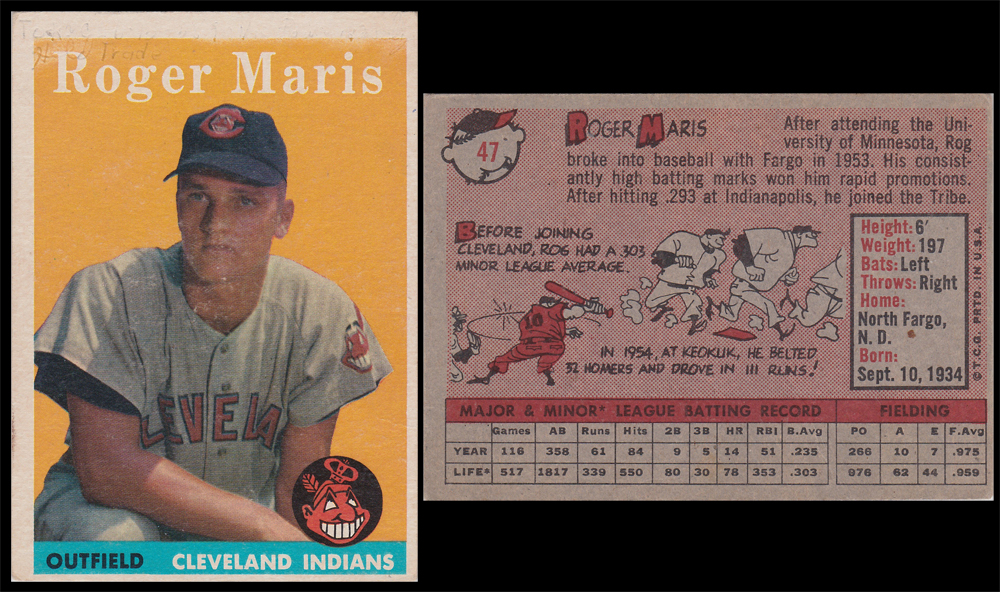 Up next is a card that I like...but for no really good reason. When I was a kid, I collected almost every product out there. This was in the mid 1990s and at the time most of it was junk by today's standards.

I think to offset the over-production and encourage sales of their products...companies starting introducing autographed cards to their packs and ultra-rare insertion rates. For reasons I don't totally understand, Pro Set selected Lions QB Erik Kramer to be there auto that year. I assume they saw him as an up and coming player and possible future star. The card is /1000 which by today's standard is not an SP...but due to how many packs they produced, this was a tough pull.

These are the kinds of cards I dreamed about when I was a kid...but never owned. Now as an adult, I am picking up cards like this because of their tie to my youth. 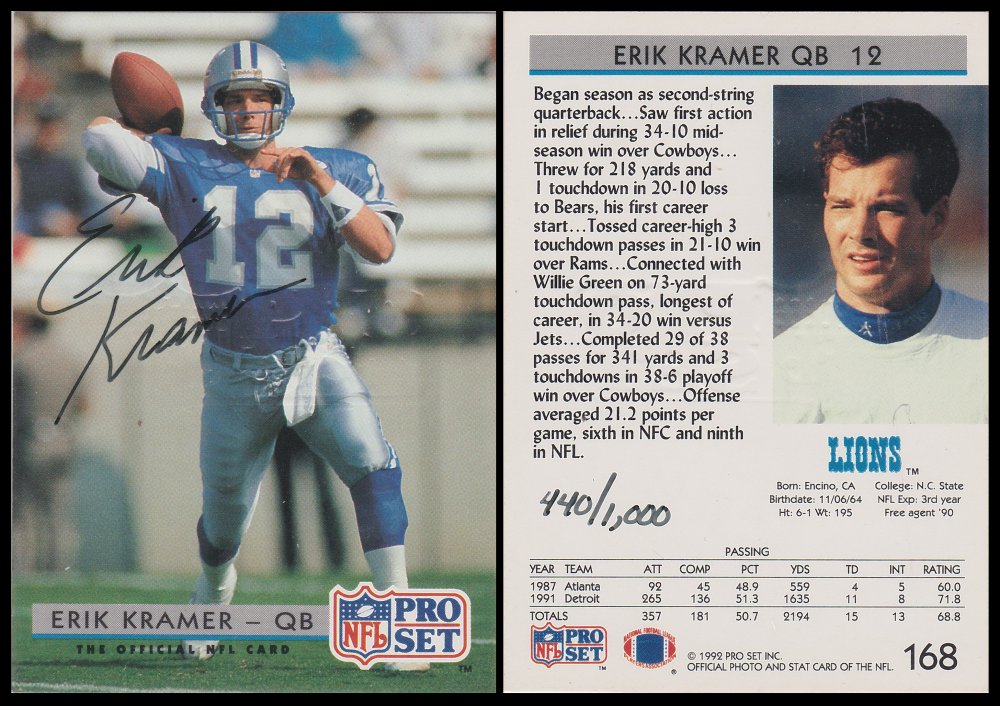 Hockey for Trade (for baseball)