NHL prepared to have a lockout/ Not Again!

Transactions
57
5.00 star(s)
With time running out on NHL labor talks, commissioner Gary Bettman cautioned Thursday that the league is prepared to lock out its players if a new collective bargaining agreement is not reached by Sept. 15, when the current deal expires.

''Time is running short and the owners are not prepared to operate under this collective bargaining agreement for another season, so we need to get to making a deal and doing it soon,'' Bettman said after the two sides met at the league headquarters.

When asked if Sept. 15 is a hard deadline, Bettman said, ''Our efforts are going to be devoted to trying to make a deal.'' He then reiterated his previous statement that owners aren't prepared to operate under the current system.

Saying a ''wide gap'' still existed between the two sides on numerous issues, Bettman added the potential for a lockout is something the NHL Players' Association has been aware of for much of the past year.

NHLPA executive director Don Fehr referred to the split as ''a meaningful gulf.''

Fehr returned to the negotiating table after a trip to Europe, where he met with players in Moscow and Barcelona.

The NHLPA head did not have an immediate response to Bettman's comments, because he spoke before the commissioner made himself available to reporters. Fehr did reiterate the union is open to continuing talks beyond Sept. 15 if no deal is reached, and entering the season under the current system.

''Under the law, if an agreement expires, that may give someone the legal ability to go on strike or impose a lockout,'' Fehr said. ''There's no requirement that they do so, and if nobody does anything, you continue to work under the old conditions until they do change. ... So if there's lockout, somebody has to choose to do this!
Talks are scheduled to continue Friday in New York, before shifting to the union's headquarters in Toronto next week. That's when Fehr expects to make a formal counteroffer to the league's initial proposal.

The union did make a presentation to the NHL on Thursday, outlining some of its economic positions in response to what the league has put on the table.

The NHL is proposing to cut players' share of revenues from 57 percent to 46 - and that percentage drops to 43 when taking into account revenues the NHL deems should not be shared with players. That would translate into as much as a $450 million shift in revenue in the owners' favor.

The league is also seeking to restrict free agency on several fronts. That includes limiting length of contracts to five years (there are currently no limits in place); lengthening the time a player must wait to be eligible to become an unrestricted free agent from seven years to 10; and eliminating players' rights to salary arbitration.

Fehr, on Thursday, said the NHL is essentially asking its players to pick up all the costs in a new deal. He also questioned whether NHL teams have any desire to share revenues among themselves to maintain a level of parity.

Without going into detail, Bettman said the NHL does intend to continue to have revenue sharing in what he called ''an enhanced way.''

Bettman did confirm that the NHL is seeking to decrease the players' share.

''We start from the premise that the fundamental proposal, our initial proposal, relates to the fact that we need to be paying out less in player costs,'' Bettman said.

Unreal. Coming off a fun season we're going to have to go through this? They never learn. Just for luck I'll post one of my best hockey cards. My three favorite goalies: 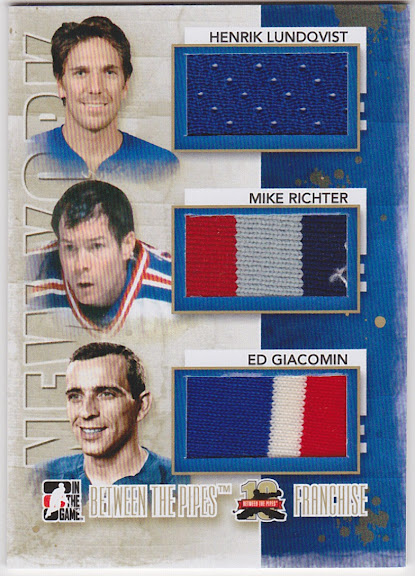 Transactions: 4
Speaking as a new fan of hockey, this sucks. I just got into it during the playoffs and was looking forward to next season. Now this happens.... :glare:

Transactions
112
5.00 star(s)
It stinks, sure, but I guess these days it's just something we'll have to get used to in sports. All that is left is a MLB lockout next season.

Transactions: 6
Sounds really one sided when reading that. The owners come off rather nuts imo.. Hope it gets worked out before the season starts again..

Transactions
57
5.00 star(s)
Well hopefully everything works out, I was so fumed at the last lock out, I wouldnt buy any NHL product at all in protest, I been a big fan since the 70's as a kid, if it wasnt for us fans and supporting the NHL by paying for tickets for game's, shirts, cards and what ever, where would they be now? its all about the money these days, How much did the great one get paid in his early years, nothing like todays players! it wasnt the money, it was the love of the game and winning the Stanley Cup! Bettman must go!

Transactions: 3
Not looking too good
O

Just starting to get back into hockey. This sucks.