Break and review is posted first, followed by contest portion.

99 card base set, 100 if you count the checklist which seem to be inserted as box toppers.

Complete 99 card base set with checklist. The usual mix of male and female talent cards and a few TNA Debut "rookie" cards. 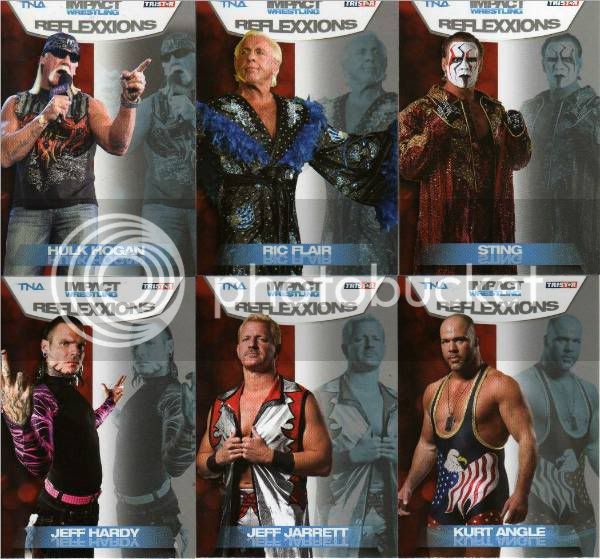 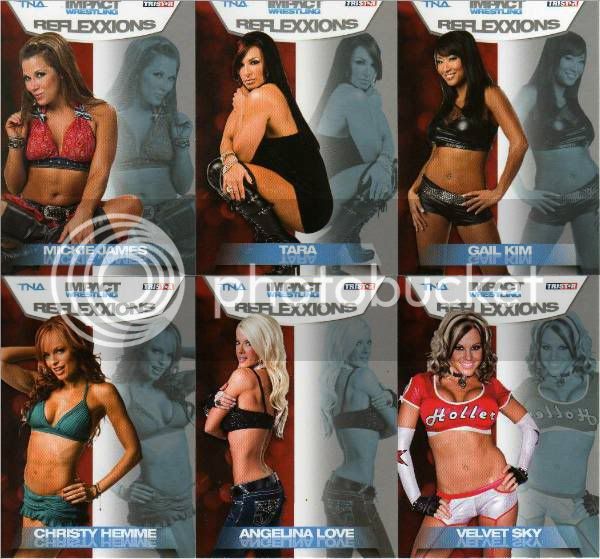 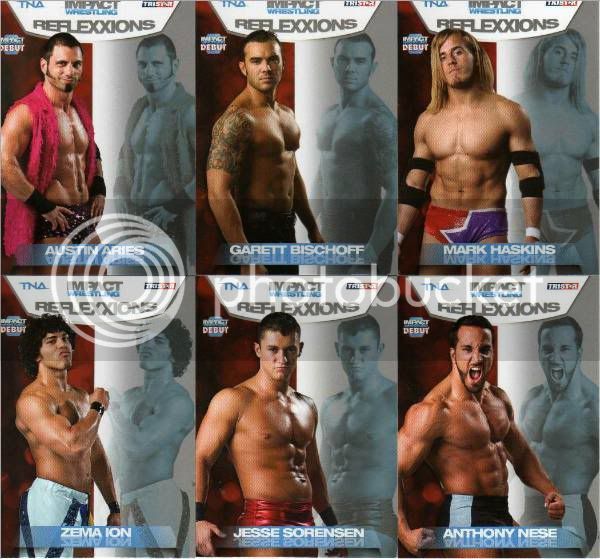 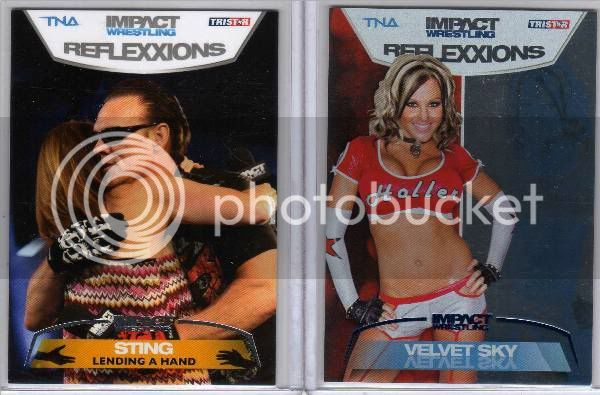 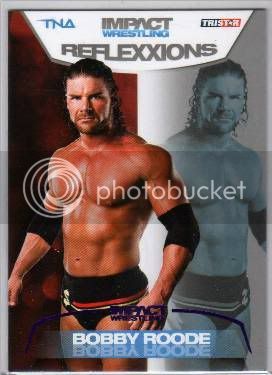 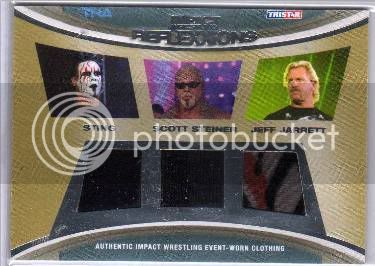 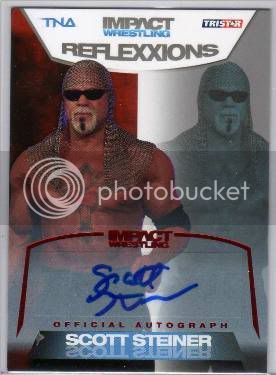 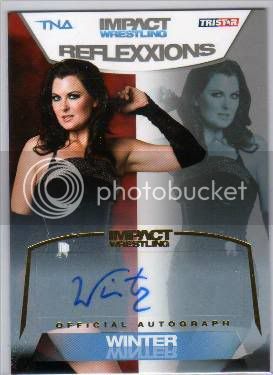 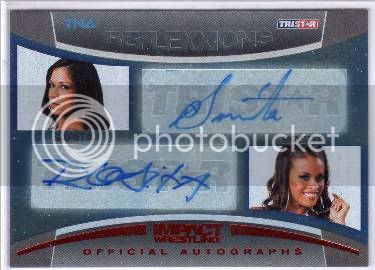 Thoughts-
I wasnt too sure what I was going to think of this new set. Tristar always loads up with the top talent of TNA when giving collectors the premium inserts such as autographs and event worn cards and such.

The first thing I noticed when ripping into this box were the base cards. I liked them. In the past few sets I wasnt much of a fan. They did well with Cross The Line and New Era, got a blah feeling from the 2009 release of Impact. That continued with Signature Impact. I cant say that this time around.

As you can tell by the scans, each base set card has an in color photo of the person on the card on one half, and a reverse image in black and white on the other half, which gives the feeling that each base set card is an insert. Something that I can most definately get behind.

The base set is done where the first 61 cards are of TNA talent, then followed by what they call "subsets". 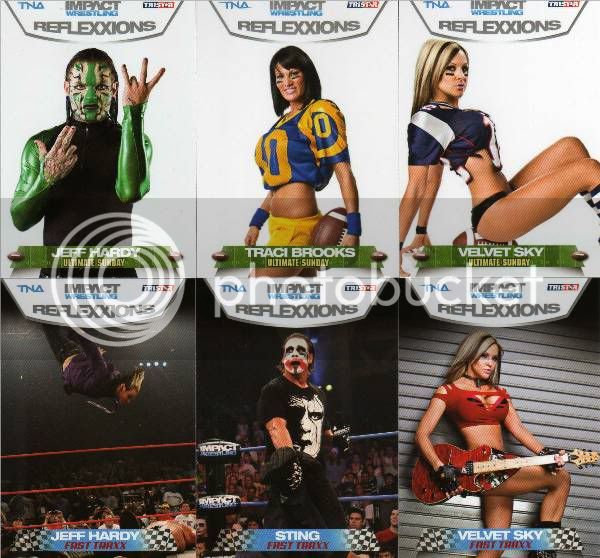 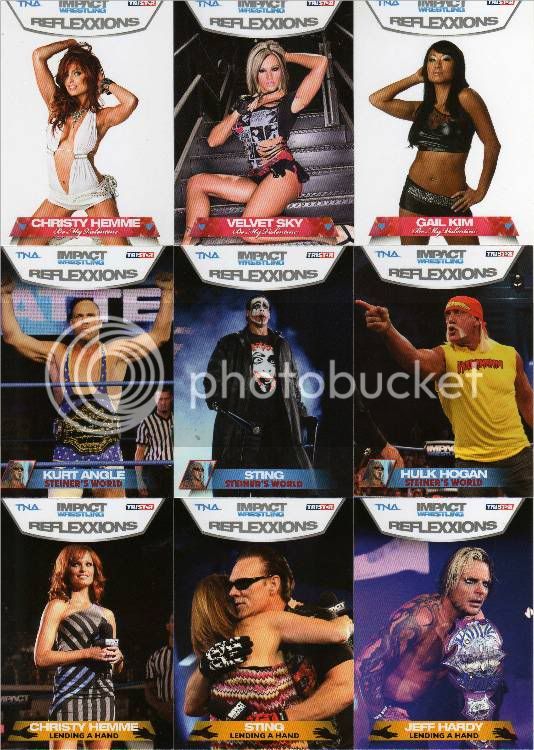 62 through 72 is Ultimate Sunday. The person listed the card gives a brief description about how they spend their superbowl sunday.

73 through 79 is Fast Traxx. The person listed on the card gives a brief description their favorite vehicles etc.

80 through 86 is Be My Valentine. The person listed on the card gives a brief description on their thoughts on Valentines Day.

87 through 90 is Steiners World. Scott Steiner gives his take on the person listed on the front of the card.

91 through 99 is Lending A Hand. The person listed on the card talks about their favorite charity and how they like to help.

Ive been collecting cards since the early 1980's. Ive been in the game long enough that subsets are usually referred to what is now called inserts. I wouldnt consider them as subset cards, but still a part of the base set. I think they have enough going on where they can leave those as the base set, and create actual insert sub-sets. Maybe highlight a PPV match or two. Famous feuds from the recent past that went down since the last set was put out.

My thoughts have pretty much been the same across all TNA sets from Tristar in that the serial numbered cards shouldnt count as a "hit".

The event worn still gives collectors a solid lineup. Especially when it comes to the duals, triples, and quads. Its nice to see some swatches with multicolor parts from the worn gear, and maybe I speak for myself on this part but I think most of the multicolor swatches should be saved for some of the lower numbered pieces. Especially 1/1s. The look of the event worn doesnt seem like it change all that much from the TNA Signature set. Felt like the same, just different color scheme.

Even though an autographed mat card wasnt pulled, Ive seen several between other message boards and on ebay and can say they made a good choice in doing these. The only advice Id have on improving these is maybe have a piece of the mat from a PPV and have dual sigs from those that had match against each other. There are tag matches that would make it hard to have more than 2 sigs on one card, but like some of the other card companys do, they can use redemptions for booklets. The only reason I mention a redemption is in case the booklet is too thick to insert into a pack.

I know some of you think ill of a company that uses redemptions but when it comes to Tristar and TNA, you will be taken care of. I could be wrong but I dont think Tristar has put out a redemption for an item that they never had.

Now, onto the autographs! I liked the single autographs because I liked the look of the base set cards. Thats basically what you are getting, a signed base card but with the foil on the front and the numbering on the back. Of course that changes when you pull a dual or triple and so on.

I did notice that they didnt go with the glitter and just stuck with colored foil. The front of the dual that I pulled came with the same foil card look as the "Premium Reflexxions" parallel.

Overall, as always, theres a nice mixture of sigs offered in this set along with the memorabilia cards. The base set was definately pleasant look wise when compared to the past few sets. You can tell some of the profile cards were posed shots and some were cropped from action pics taken at a match. I bring that up because as most know, I collect ODB and whoever used that pic for her base set and autograph cards made a really bad choice in my opinion. Maybe its due to time constraints where thats all they have to work with, but when you look at some of the others, they could have done better for my girl.

Id like for them to bring back redemptions for stuff like the signed 8x10 and baseballs and other memorabilia. Maybe even insert cards to send in to enter a drawing of sorts, something along those lines.

Last but not least, Id like to talk about the cost. Granted you get more "hits" with Tristars product than you do with Topps, but the cost of these are pretty up there. Id like to see that change, as would most collectors I think. Im not privy to how everything goes down when it comes to figuring up the hits per box ration and the cost involved, but I think people would like to see the hits lowered in order to bring down the cost of the boxes.

We all know when it comes to buying boxes, its a gamble, theres just no arguing that. You wont always get the big hit but its a tough pill to swall when the cost is where it is, and even with 7 hits per box, it seems tough to even get half the boxes value back.

Like Ive always said, if you can afford to break a box or two, I say go for it. Tristars TNA product is a fun break no doubt. If youre on a budget, stick to ebay or watch others that break the boxes for you and pick up what you want that way.

Contest Portion-
Part 1. Guess the serial numbers. Over or under, it doesnt matter. The only one I outed was the obvious 1/1. Attempt a guess for all 3 autos, 1 event used, and 2 parallels.

If you guess the number exactly, you win that hit. Since this is going to be posted on more than one site, its entirely possible someone will guess the same number as you. If that happens, the preference goes to who entered their guess first.

You MUST include #1 and #2 with your answers. Put some effort into it please! If the opinion portion is good enough, its entirely possible Ill put more prize material in.

This contest is open from the time it was posted, until this sunday at 6pm central. Everyone is allowed to take a shot, including the mods of the site.

Edited answers are voided and disqualified.

Transactions: 1
i dont watch wrasslin, but its a decent looking set, and always nice when you can pull the base set from a box

I absolutely love the Roode 1/1. I'm a massive homo for him :dance: