ANCASTER, Ontario (AP) -- Four straight birdies put Scott Piercy into the mix early. One big par at the end made him a winner Sunday at the Canadian Open.

Piercy won for the second time in his career when he closed with a 3-under 67, and William McGirt and Robert Garrigus stumbled on the closing stretch at Hamilton Golf & Country Club to finish a stroke back.

McGirt, atop the leaderboard for much of the final round, had his first three-putt bogey of the week on the 15th hole when he ran a 45-foot putt some 15 feet by the hole. Tied for the lead playing the 18th, he put his approach into the bunker and blasted out to 18 feet, missing the par putt that would have forced a playoff. McGirt closed with a 69.

Garrigus, the 54-hole leader, missed six putts inside 8 feet. The last one was the most costly. He three-putted from long range just off the green on the 16th, missing an 8-footer for par that left him one shot behind. He missed a 15-foot birdie putt on the 18th to force a playoff and had to settle for a 70.

Pierce won while sitting in the clubhouse. Moments earlier, he two-putted for par from 50 feet on the 18th to finish on 17-under 263 and tie the oldest 72-hole scoring record on the PGA Tour. Johnny Palmer had a 263 when he won the Canadian Open in 1952 at St. Charles in Winnipeg, Manitoba.

It was the second time Piercy has won on the PGA Tour in the last year. He picked up his first win at the Reno-Tahoe Open last year, which is held next week for players who don't get into the Bridgestone Invitational at Firestone.

Now, Piercy is headed to his first World Golf Championship, and then off to the PGA Championship. More perks arrive next year when Piercy goes to Augusta National for the first time to play in the Masters.

Piercy ran off four straight birdies starting on the second hole, a streak that concluded with consecutive two-putt birdies. He reached the par-5 fourth hole in two, and then drove the 296-yard fifth hole.

In what amounted to a three-man race on a warm, sunny day at Hamilton, Piercy looked as if he took himself out of the hunt when he ran into trouble off the tee at the 14th, had to play out of the trees and make a 6-foot putt to escape with bogey. But he answered that bogey by chipping in for birdie on the 15th, and then hung on for pars.

McGirt, who had never seriously challenged to win in his two years on tour, played in the last group over the final two rounds and played with poise. He took the outright lead by using a hybrid to chip from behind the ninth green, the ball rolling into the cup for an unlikely birdie. McGirt was steady from there until blasting his 45-foot birdie putt well past the cup for a bogey on the 15th.

He failed to birdie the par-5 17th when he went from the right rough to deep rough above the green to the left, and failed to hit the 18th green from the fairway. The small consolation for McGirt is not having to return to Q-school. His tie for second secures his card for next year, and he is all but assured getting into at least two of the FedEx Cup playoff events.

''I would have loved to have won the golf tournament,'' McGirt said. ''But I played very well all week.''

Garrigus might have wanted to break that long putter, which cost him dearly. He missed a 4-foot birdie putt on the third hole, and that summed up his round. He missed from 7 feet for birdie on the fourth and the eighth holes, and then missed from 8 feet on the ninth and badly missed a 4-foot birdie putt on the 238-yard 13th after one of his best tee shots of the final round.

But he hung around, and when a 25-foot birdie putt finally fell on the 14th, he mockingly pumped his fist to celebrate. That left him one shot out of the lead, but he gave it back with another miss on his par putt at the 16th. 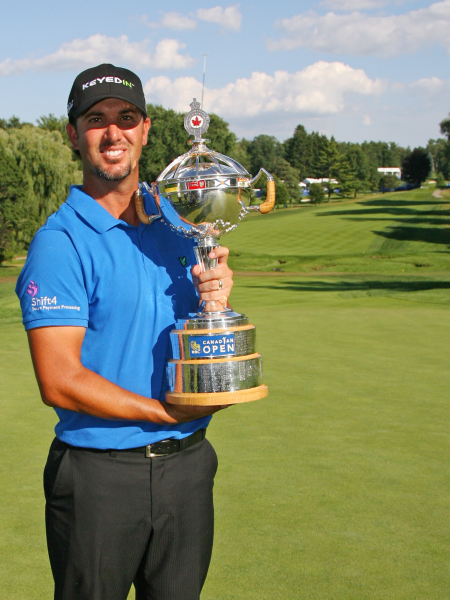