Transactions
112
5.00 star(s)
Through the years of collecting I've focused my collection on several different things, from super collections of certain players to a PC of HOF game-used and autos. None of those collections lasted long, however, before they quickly just got boring. Last year, though, watching the NFL draft it dawned on me; why am I not aggressively collecting Dallas Cowboys? I'm an extremely passionate Cowboys fan, so it just made sense. That said, I decided to start collecting multi-colored patches and autos of all current and retired Dallas Cowboys players. I don't collect players who play for the Cowboys for just a few years and move on. I only collect players who spend a majority of their career as, and are best known for being, a Dallas Cowboy.

If an image isn't showing it's because I found a better card of that player to replace the one I had. Keep scrolling and you should find that card.

So, I'll start off by showing what I consider to be the staple of my collection. This card was sent to me absolutely free of charge by Cool_Hand_Flash, by far one of the best guys you'll ever come across.

Transactions
112
5.00 star(s)
Here is another one that I got from a group break. One of the hottest linebackers in the NFL right now. 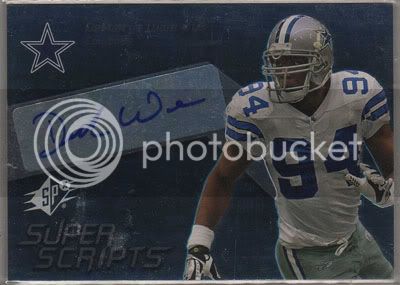 Transactions: 6
Sweet stuff my friend (and I seem to remember we had a "blind" trade with the Romo People, people! Mike sent back a Joe Montana auto! Seriously! I mean, Romo's good and all, but Cool Joe? Kinda shows that Mike's pretty cool too

Transactions
112
5.00 star(s)
Believe me, Mark. The Romo means a LOT more to me than the Montana.

Transactions
112
5.00 star(s)
Here's a guy that Emmitt Smith owes his entire career to.

Transactions: 6
Johnston was awesome. I still remember clearly that clip of when Emmitt broke Walter Paytons record, when he ran to Johnston and all the emotion came pouring out of him

Transactions
112
5.00 star(s)
This was the first piece that I added to my collection.

Transactions: 6
Bob Lilly, great player even though his last name indicates the opposite

Honestly, I can't help but think of Evangeline Lilly from Lost

Transactions
112
5.00 star(s)
Here he is again! One of the most dominant players in the game today.