How about Jackie Robinson!

LOL, Uecker would be great. Perhaps if I include broadcasters into the set at some point. However, if I can find a decent photo of him he will be in my Braves Legends set. I actually have a case of signed baseballs on my wall in my home office...all signed by Braves greats...12 balls in total. I need to add Greg Maddux to finish the "set" I had in mind when I started putting it together. I have a Bob Uecker ball in there as a place holder...been that way for a few years now. It just might stay that way.

Here it is...you can see the Uecker ball in the third row on the left side. I also have a signed 1963 Topps of him around here somewhere. 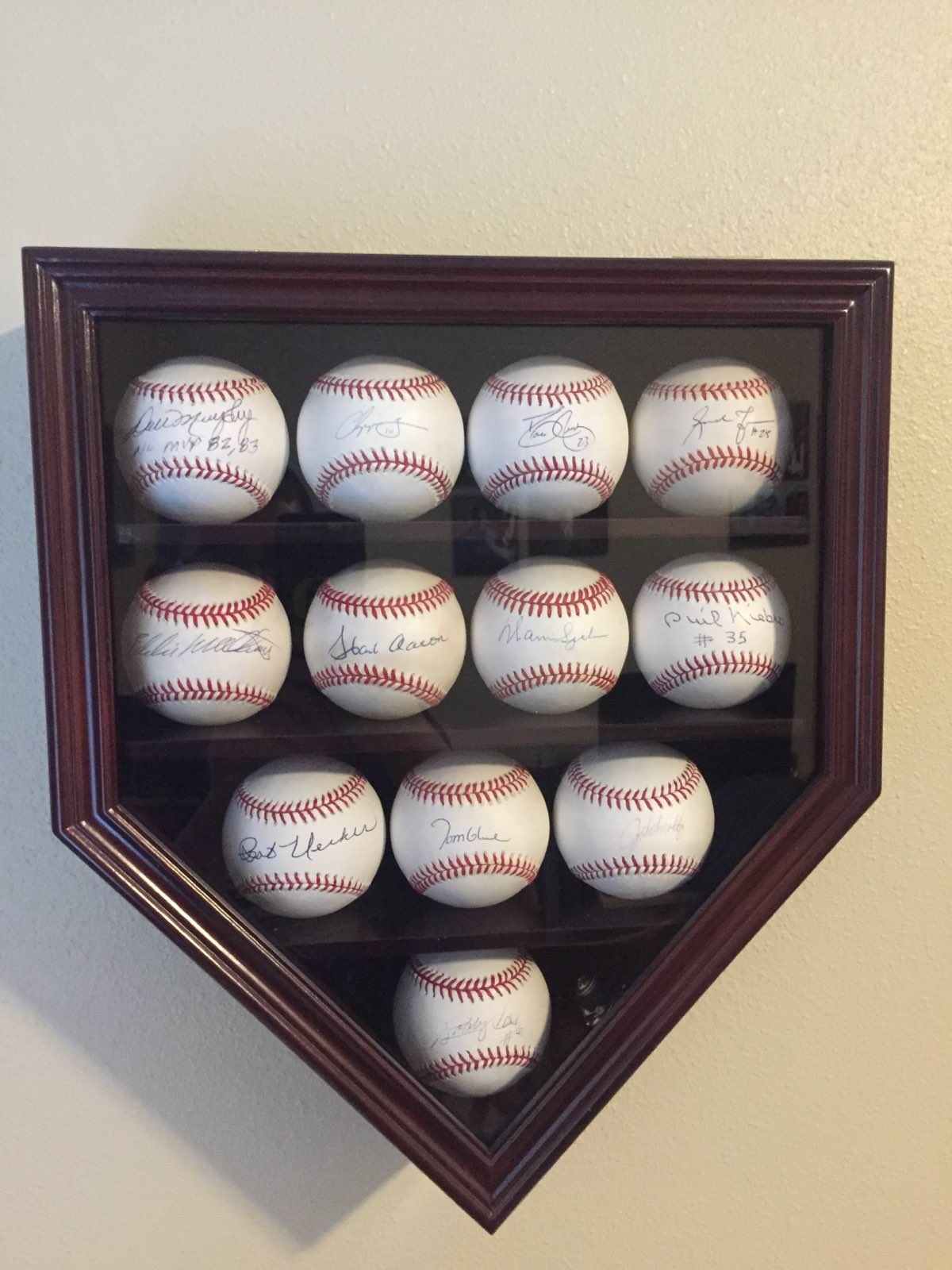 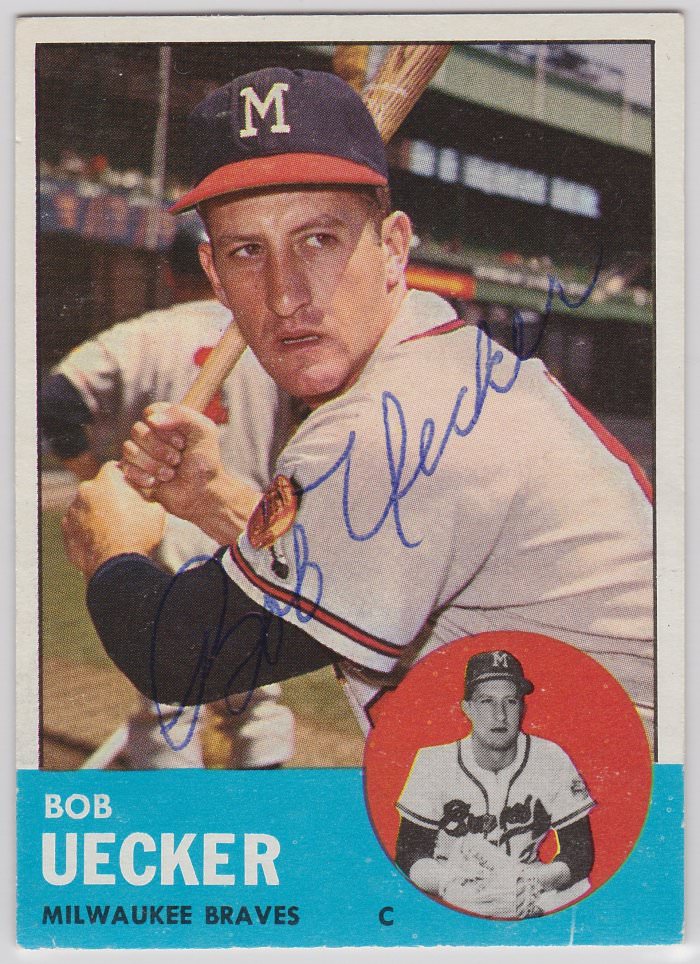 As for Jackie Robinson...I was thinking of doing a card of him as the next piece in the set before asking for opinions. Great minds right.

I actually finished it last night after I saw your response. I want to post it with another completed project...which isn't complete yet. Will hopefully finish it tomorrow.

Nice Auto Collection! Like the Uecker card (auto) too. I have that card also, minus the (auto).

When you say you only need the Maddux signed ball to complete the set. Are you including Babe Ruth? Or, is he included in the next set?

Speaking of Ruth, does he make it into your Braves Legends Set?

Looking forward to seeing the next couple of cards.

unkilldoo said:
Nice Auto Collection! Like the Uecker card (auto) too. I have that card also, minus the (auto).

When you say you only need the Maddux signed ball to complete the set. Are you including Babe Ruth? Or, is he included in the next set?

Speaking of Ruth, does he make it into your Braves Legends Set?

Looking forward to seeing the next couple of cards.
Click to expand...

For the baseball set...I'm not including Ruth. A signed Babe Ruth ball is in the same collection as a Ferrari 288 GTO...you know, the one that comes after winning the Powerball or finding out I'm Bill Gates' only living heir.

I picked up that baseball case several years ago and I thought it would be fun to put together a collection of signed baseballs that really illustrated what I thought when I thought of the all-time Braves players.

So, here is what my plan has been.

The top row is modern "star" players that I grew up watching. Basically...not Hall of Famers. Players that I liked. So, that row is Dale Murphy (a little before my time but close enough), Chipper Jones (now in the HOF, wasn't then), David Justice (childhood favorite player), and Andruw Jones.

The second row of 4 balls was intended to be the "legendary" Braves Hall of Famers from the past. Players that had their HOF career with the Braves (unlike Ruth). That row is Eddie Mathews, Hank Aaron, Warren Spahn, and Phil Niekro.

The row of three balls was going to be the "future HOF" pitchers I grew up watching in the 1990s (now all in the HOF). Those are Greg Maddux (Bob Uecker ball currently in its place), Tom Glavine (favorite player as an adult), and John Smoltz.

The last one is for legendary manager Bobby Cox.

As for the card set...I have been kicking it around but I think I will do a Babe Ruth card. If they played for the Braves at some point in their career, they are eligible. Enos Slaughter is another one that comes to find.

OK, so here are some new ones.

First is the next card in the ML Legends set. 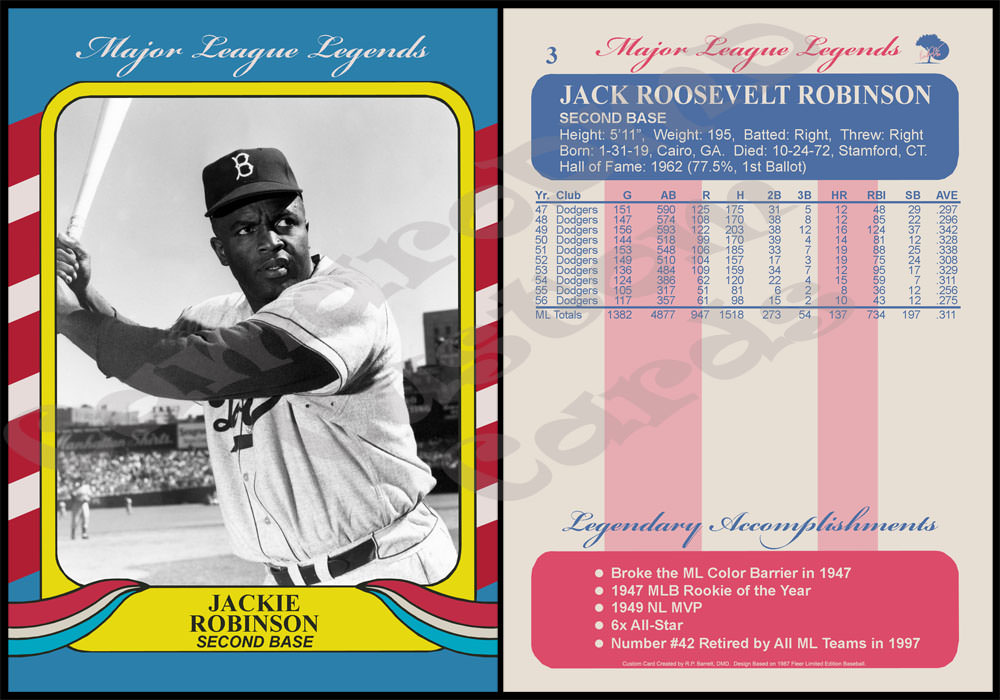 Up next is the next card from my Brave set. 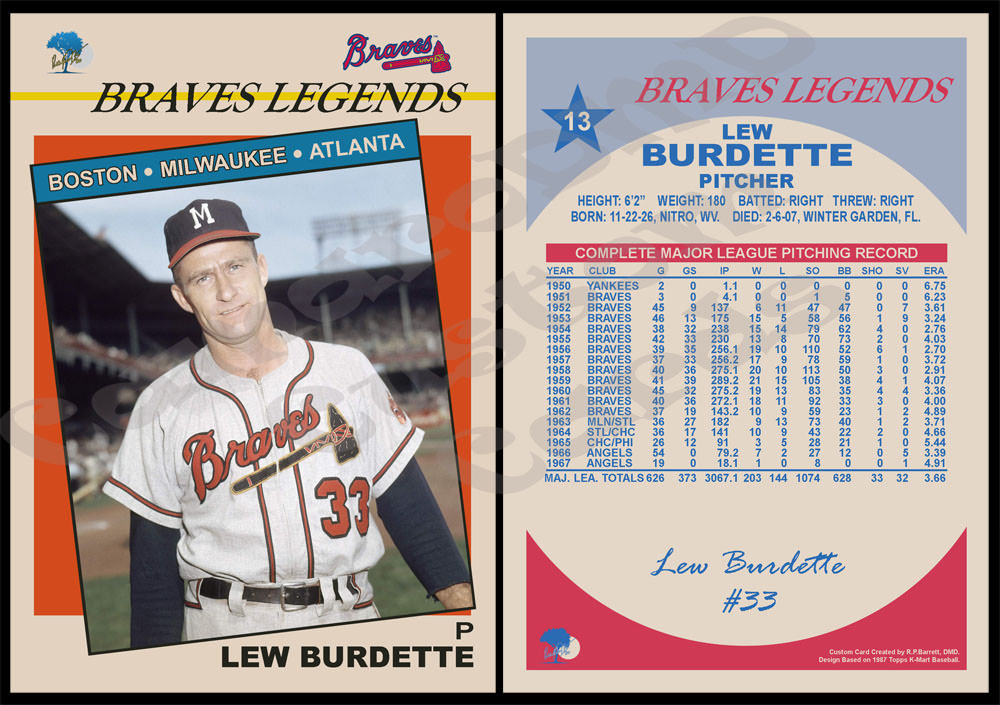 Finally, a totally new design. I wanted to do an All-Star themed card so I decided to do one of Freddie Freeman. He was just voted to his third All-Star Game...and is a starter for the first time. 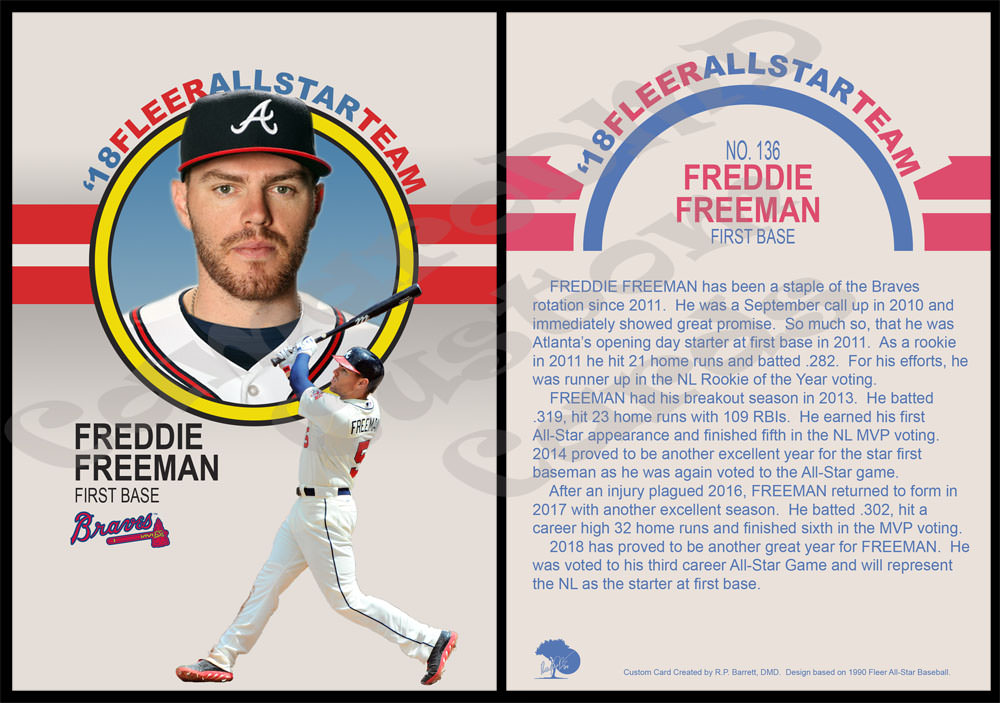 OK, I've really jumped into this ML Legends set and have been having a lot of fun making them. So, I have done a bunch in the last two weeks. Here they are: 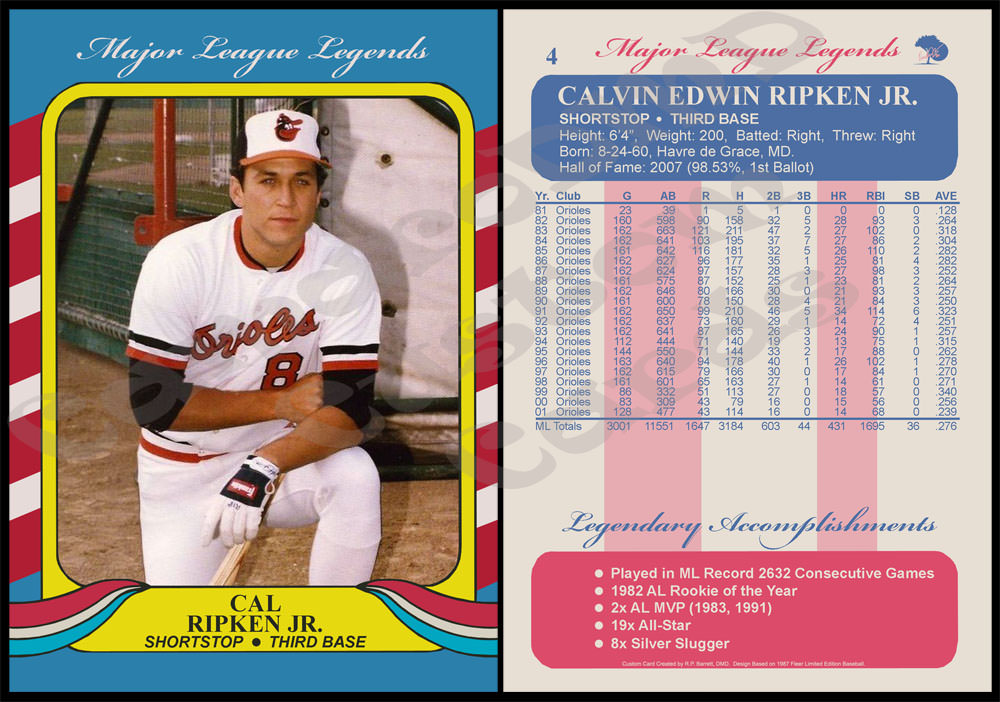 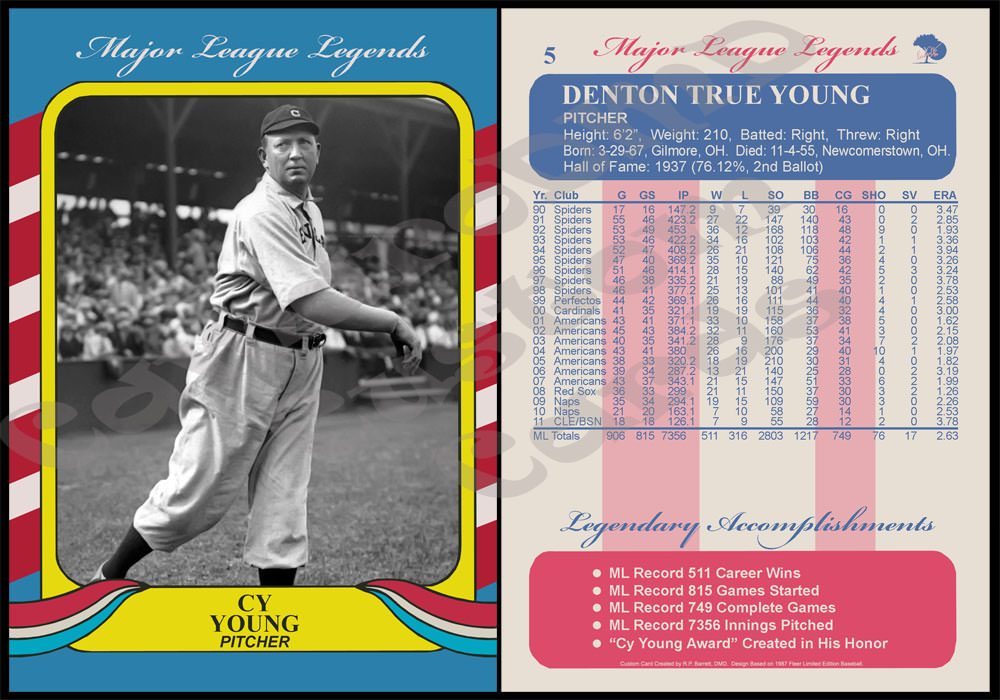 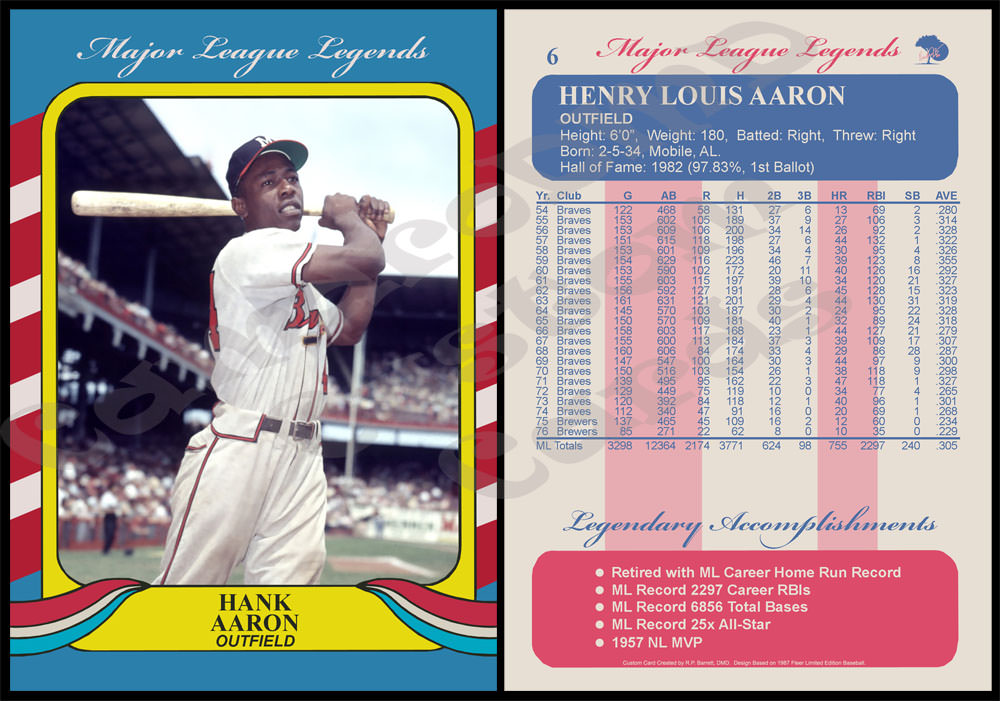 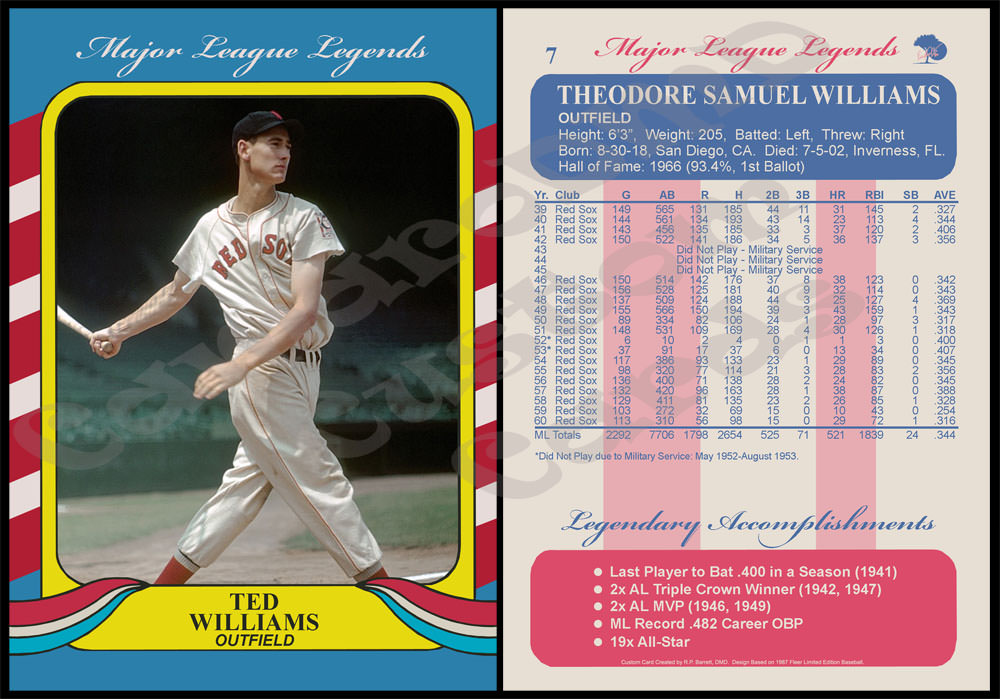 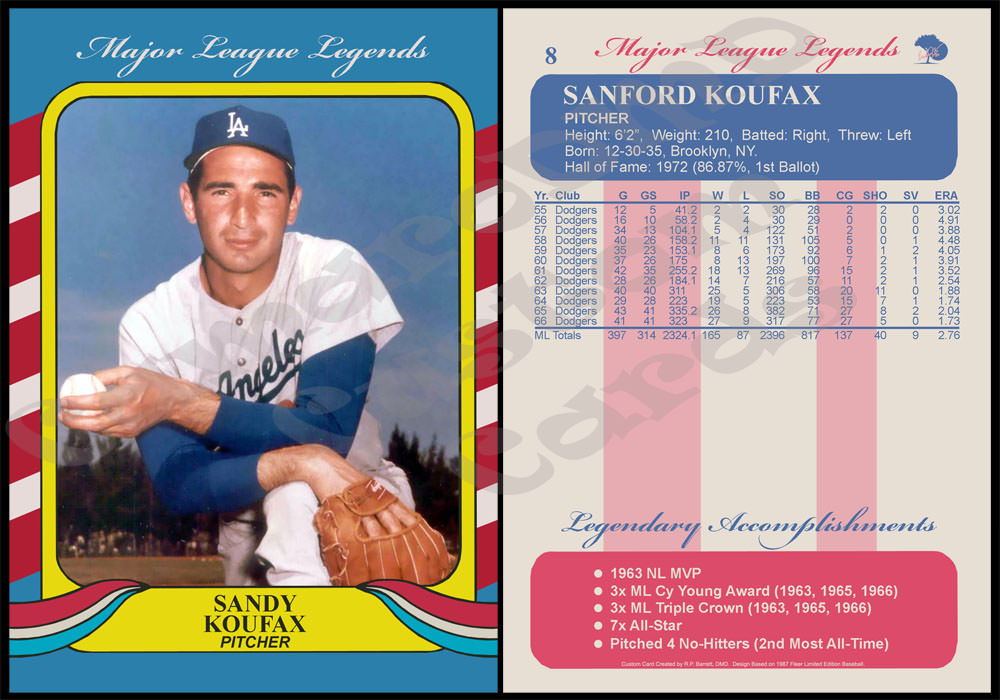 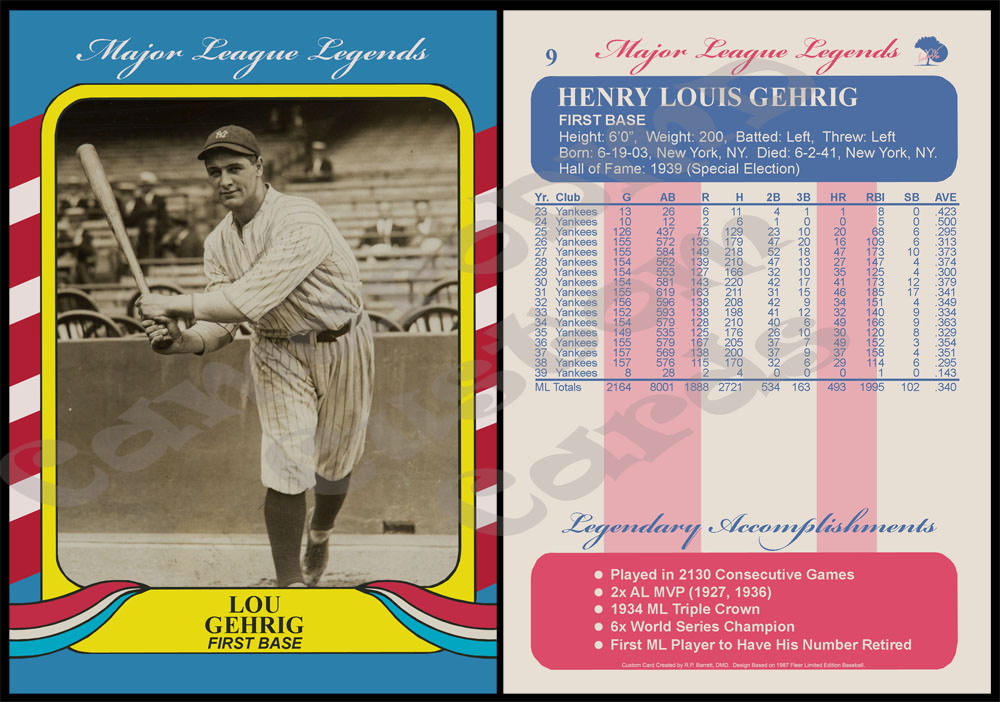 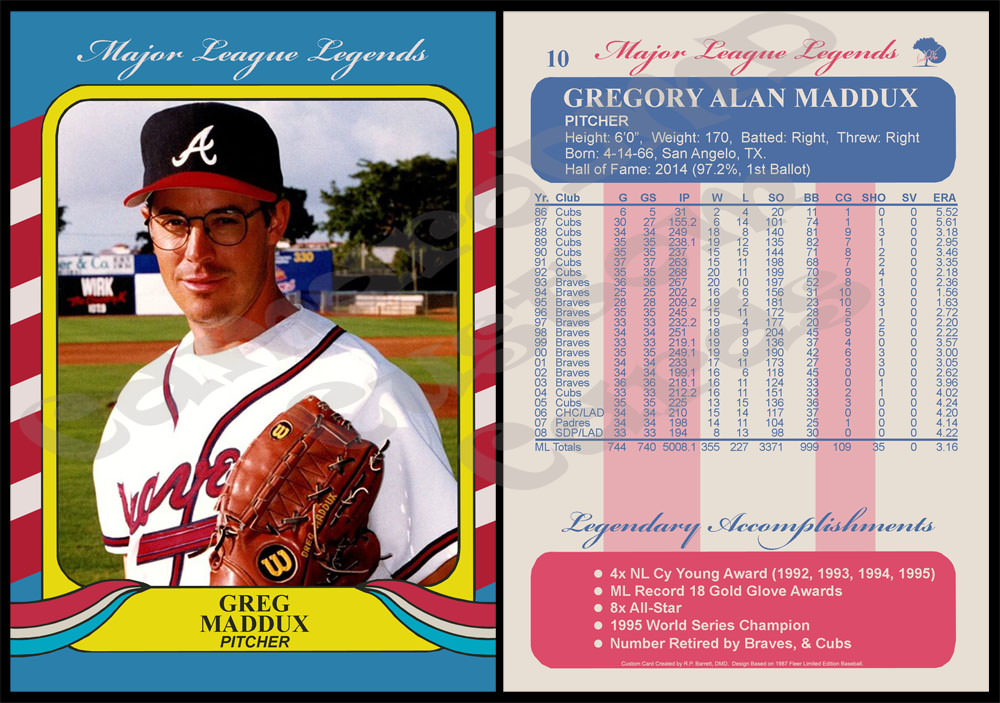 So, I've been working on this MLB Legends set...it's been a lot of fun. Here are what I have done recently. 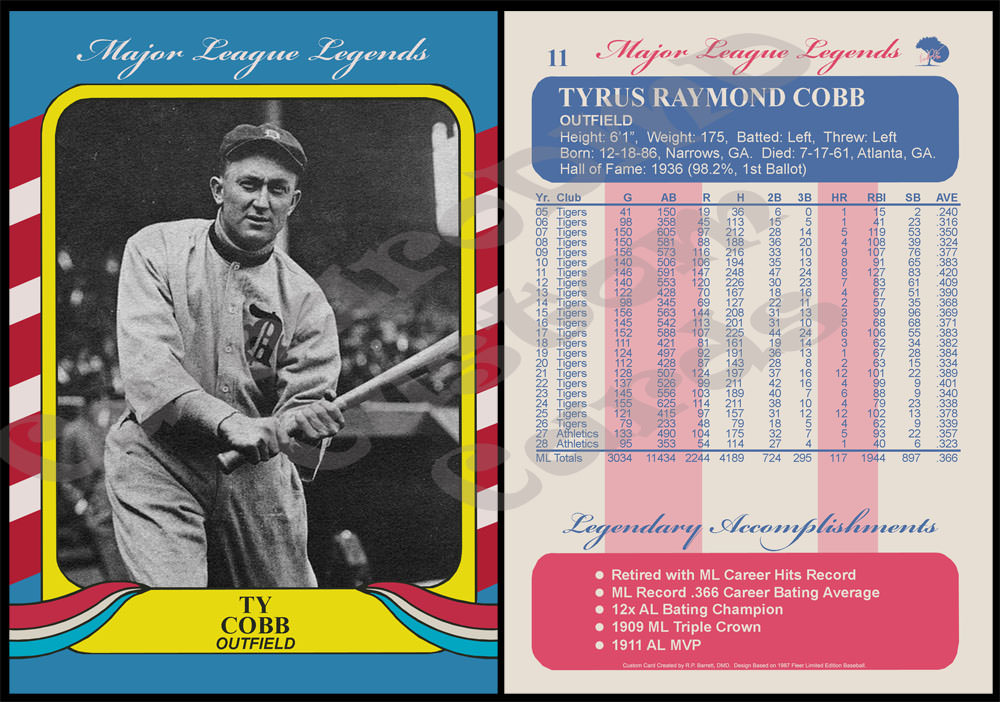 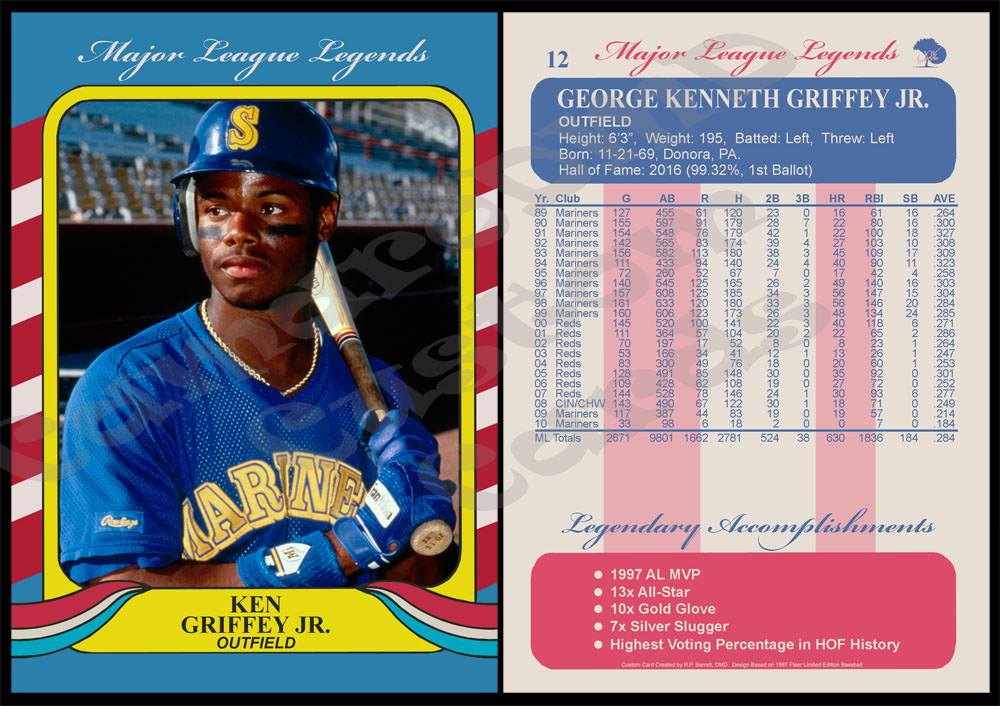 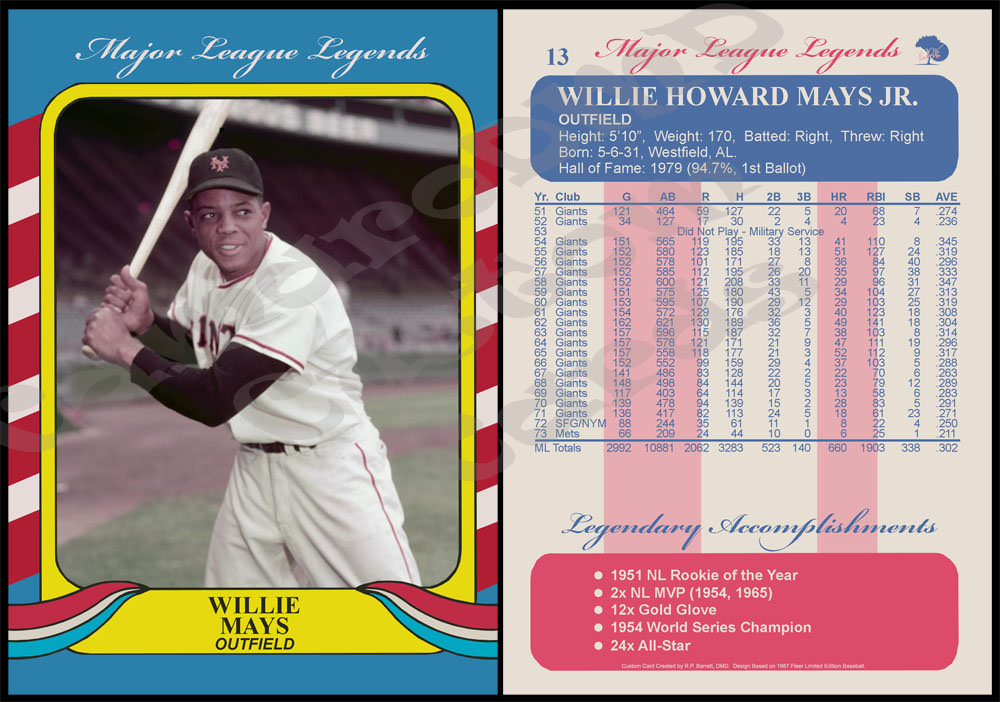 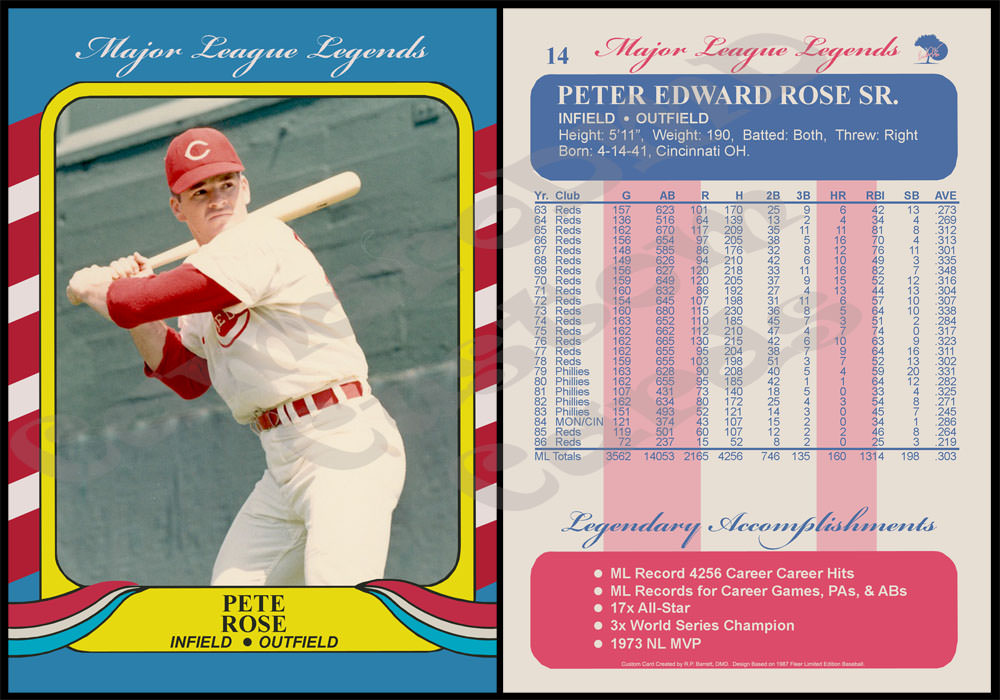 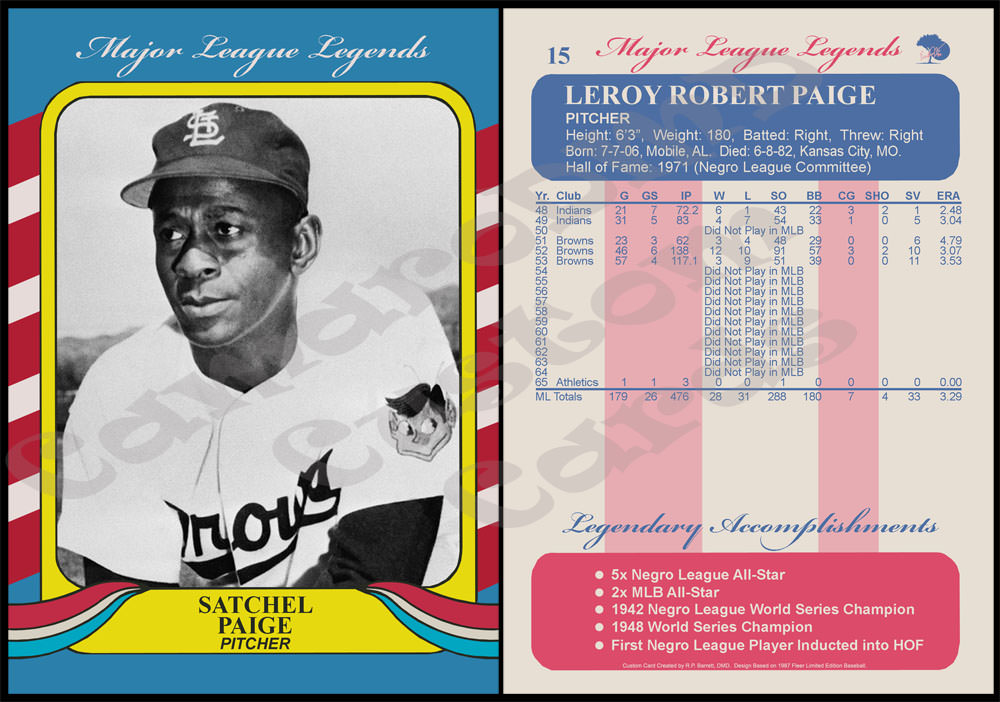 Here's a quick one I did to commemorate the trade a couple days ago. I really think this could set the Saints up well if he can stay healthy. The last time they went after a QB with injury concerns it worked out pretty well.

I think people will quickly forget him in a Jets uniform so I wanted to do a card of him in it. 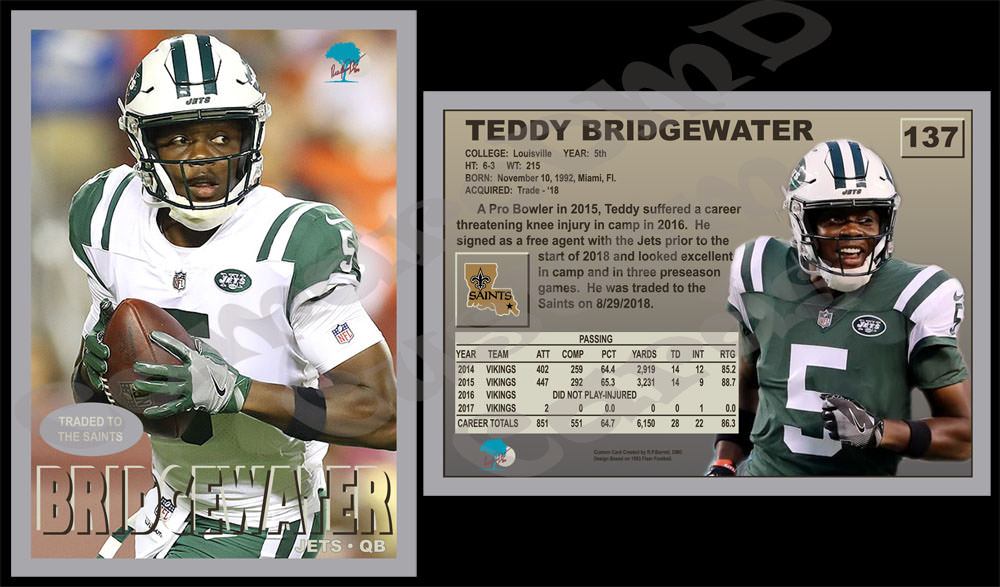 Awesome looking card! I believe it is the only card, showing him in a Jets uniform.

CamaroDMD said:
So, I've been working on this MLB Legends set...it's been a lot of fun. Here are what I have done recently.

This set is really turning out nice. Great design, incredible selection of players. It really does have everything going for it.

Here are a few more I have done.

These first couple were done back in the pre-season and never posted.

Up first is a card that is somewhat of my own invention. This is a 1987 Topps Traded. Topps Traded football didn't come out until 1989 but I love the 1987 design so I thought it would be fun to try and make one. I made a Baker Mayfield card based on 1987 Topps in his college uniform...so I thought he would be a great subject for a "traded" card. I also thought his uniform looked really strange with the helmet stripe missing...which was a Browns pre-season thing. 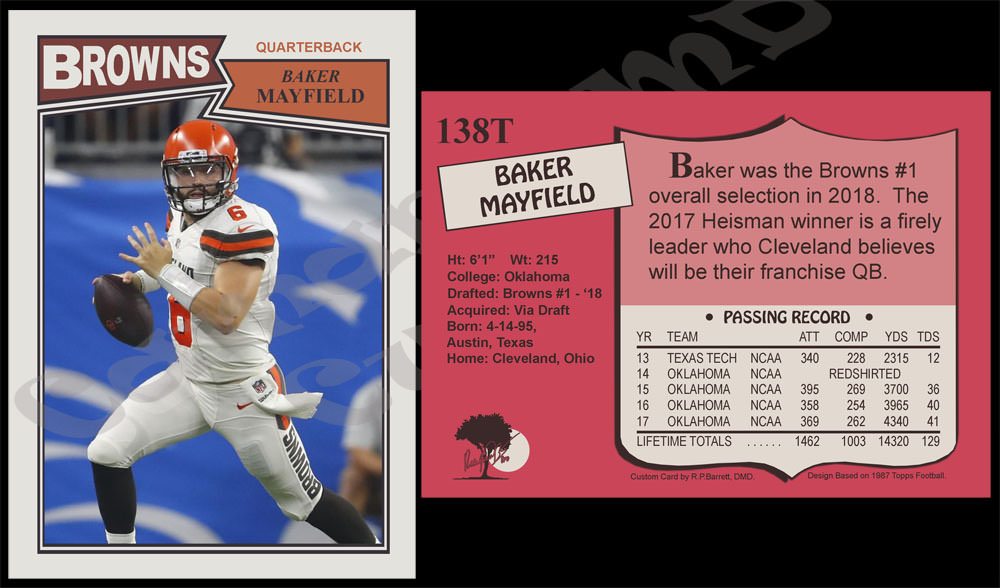 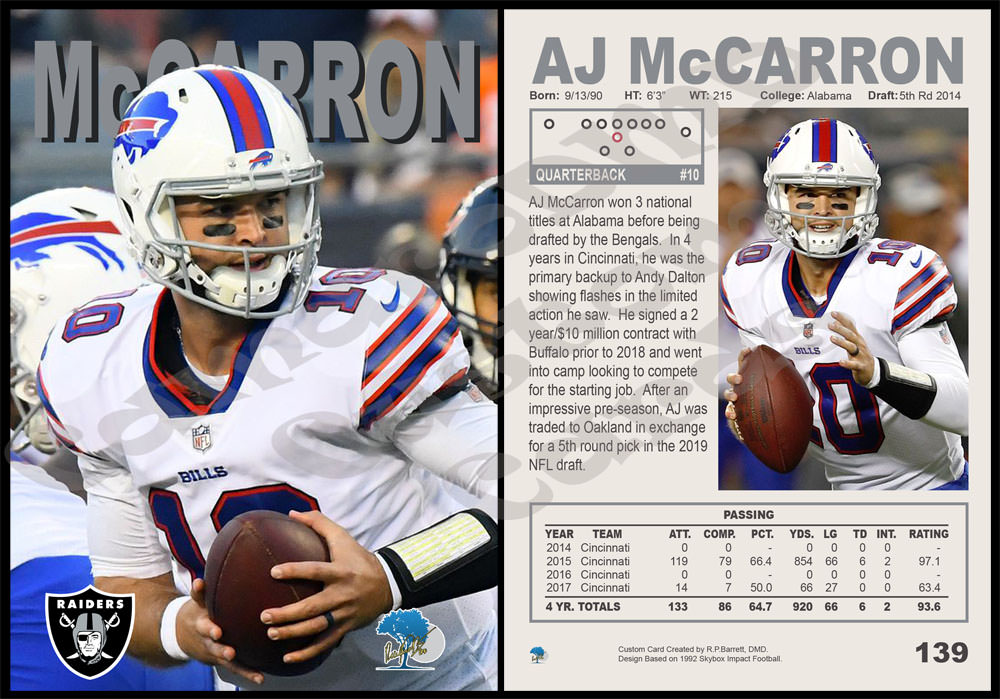 Here is one I just finished. I have done a few cards featuring this former Duck recently and since he spent part of his career with my Panthers I thought I should do a Panthers card for him too. 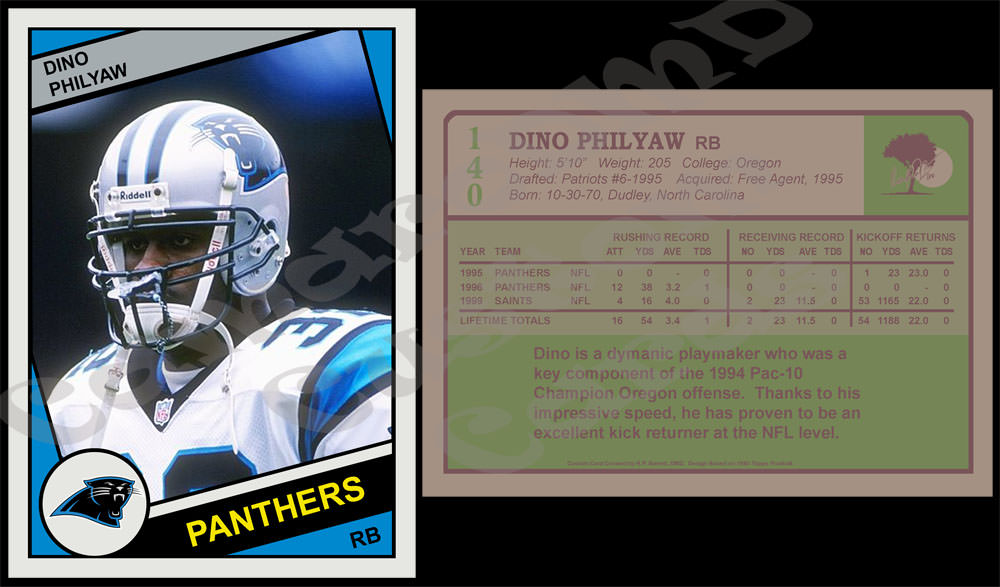 Up next is my first 100% custom design. This is a set I am starting to commemorate the Heisman Trophy and its winners. 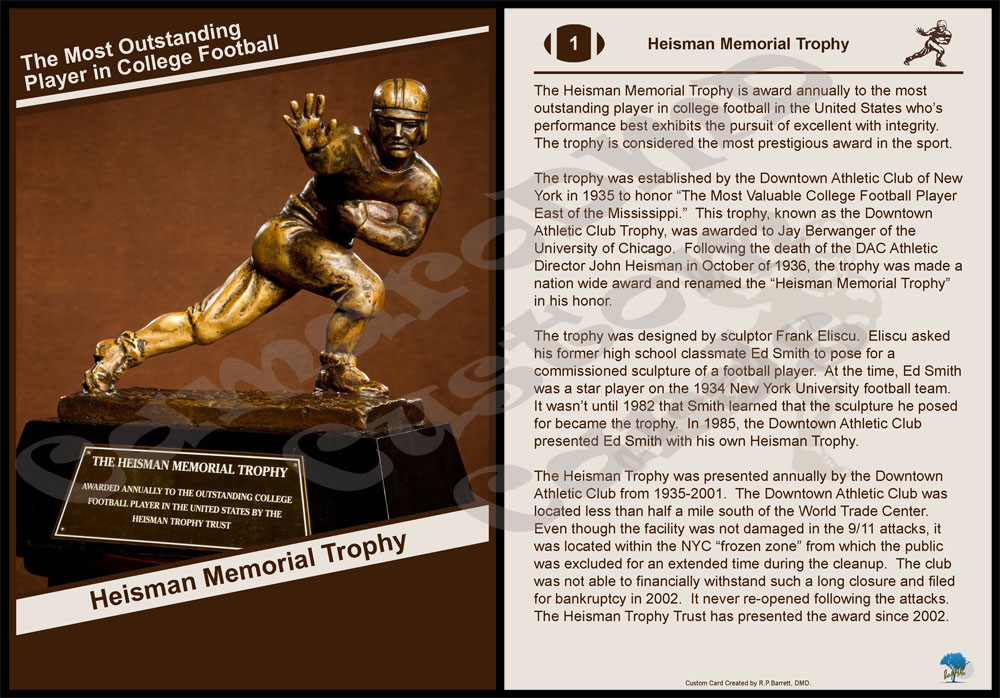 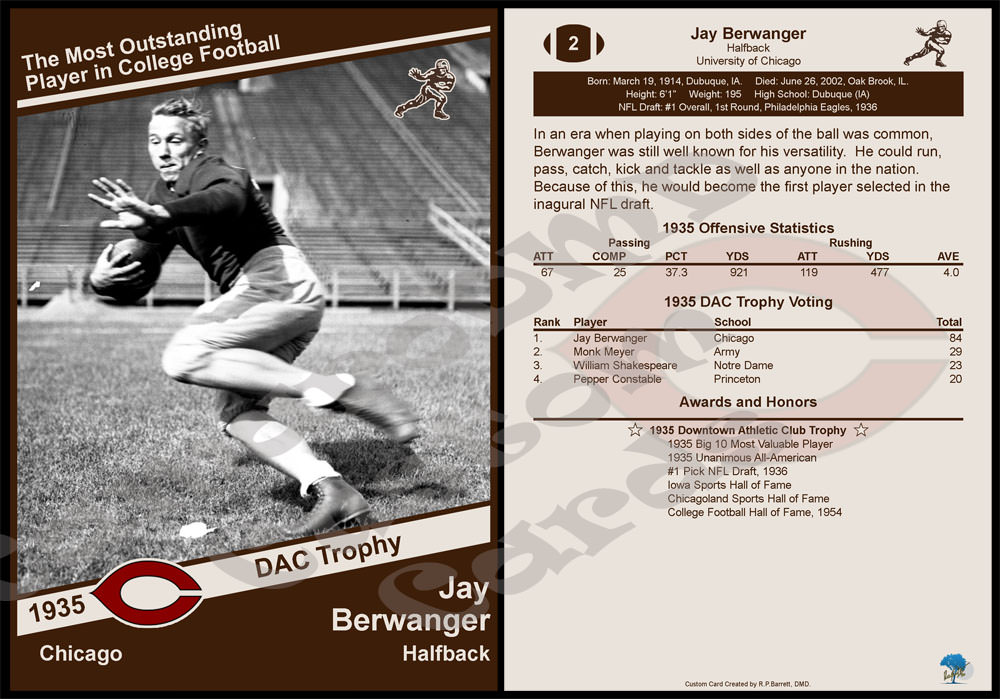 Love the Ducks set (Live in Oregon and love the Ducks) and your attention to detail is great, minus a few spelling errors but the pictures are what really grab ones attention. Well done!!