Over the last few months, I have gotten into creating custom football cards using photoshop. Recently, I began printing out the cards and turning my digital creations into real cards.

I have a variety of reasons I like doing this. I have a lot of players that I liked as a kid who never had cards, creating my own allows me to send them TTM requests with cards. I also like the idea of creating cards that were never made but I wish would have been. It's also just fun.

These cards are not for sale and are not to be copied or sold by anyone without my permission. I do this for fun...not for profit.

I first started by creating an Oregon Ducks set...my favorite college team (and the school where I did my undergraduate studies). I created a 1967 Topps themed design and I am still adding cards to that set. You can see it here:

I have since branched out and started creating other cards. I have decided to start my own little random assortment of custom cards which I will post here. I'm gonna number them as I go along. There will be a variety of themes and re-created designs. So...here goes.

I have already shared the first 4 cards in another thread, but since they are gonna be #1-4 of my card creations, I figured I should start with them. I will post 5 cards in this first post.

So, the first 4 cards are a career collection of a former player named Tim Wrightman. He was a TE in the USFL and played for the Chicago Bears for 2 seasons. He is also a semi-distant relative on my mom's side (he's my mother's cousin...whatever that makes him to me). Anyway, he played the 1983 season with the USFL's Chicago Blitz and the 1984 season with the USFL's Arizona Wranglers. He then played 1985-86 with the Chicago Bears and was a part of the Super Bowl XX Championship team.

Traditionally, older Topps cards reflected the season before their production. So, I decided to create his 2 NFL cards in the design on the 1986 Topps set (reflective of the 1985 season) and the 1987 Topps set (reflective of the 1986 season). I followed the same logic for the USFL cards. In reality, the 2 USFL Topps issues (84 and 85) were actually produced reflective of the year of production...but I took a little artistic liberty here. For these cards, I tried to create the design to be as accurate to the original sets as I possibly could. So: here are his 4 cards: 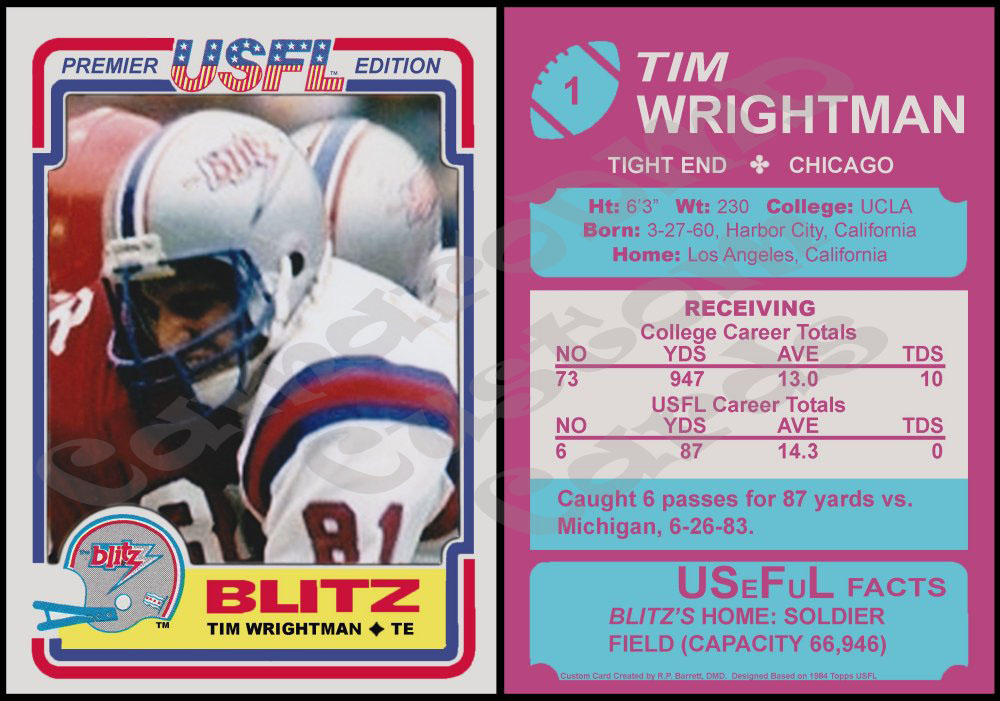 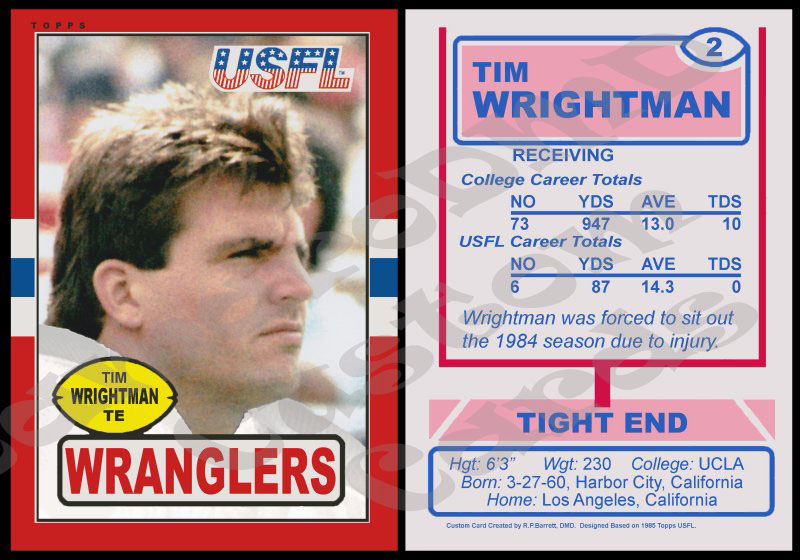 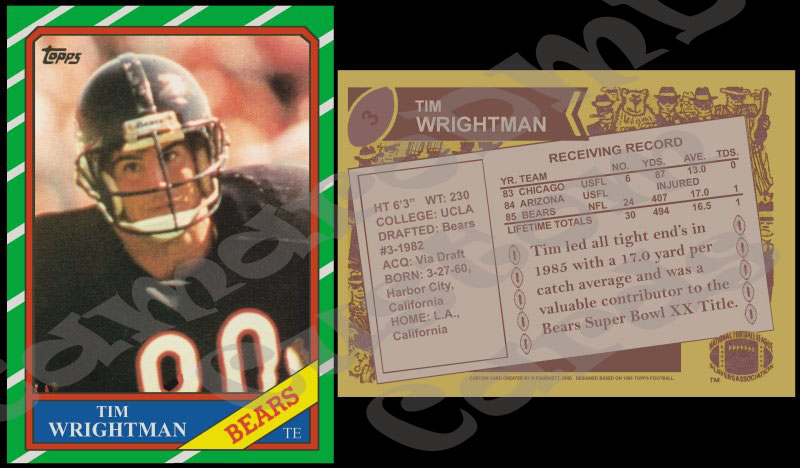 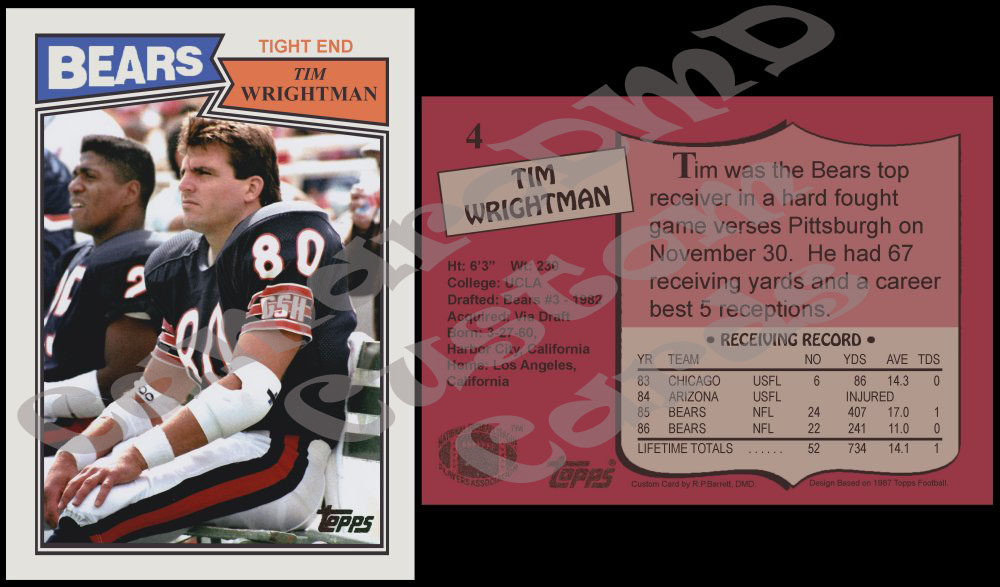 Next, I decided to create a card of one of my favorite college players from my childhood. As a kid, Notre Dame was among my favorite college programs (after the Ducks of course) so in my world their QB was royalty. Their QB at the time was the legendary high school prospect Ron Powlus. Although Powlus had a record breaking career with the Fighting Irish, he was never able to live up to the unrealistic recruiting hype that came with him and many people remember him as a bust. The truth is he was an excellent QB...and he was one of my favorite players. I created a card for him using a similar template to my Oregon Ducks set. The design is based on 1967 Topps but the back has significant artistic liberties taken to allow for his full career stats and his bio. The back however does have the "feel" of the original design. 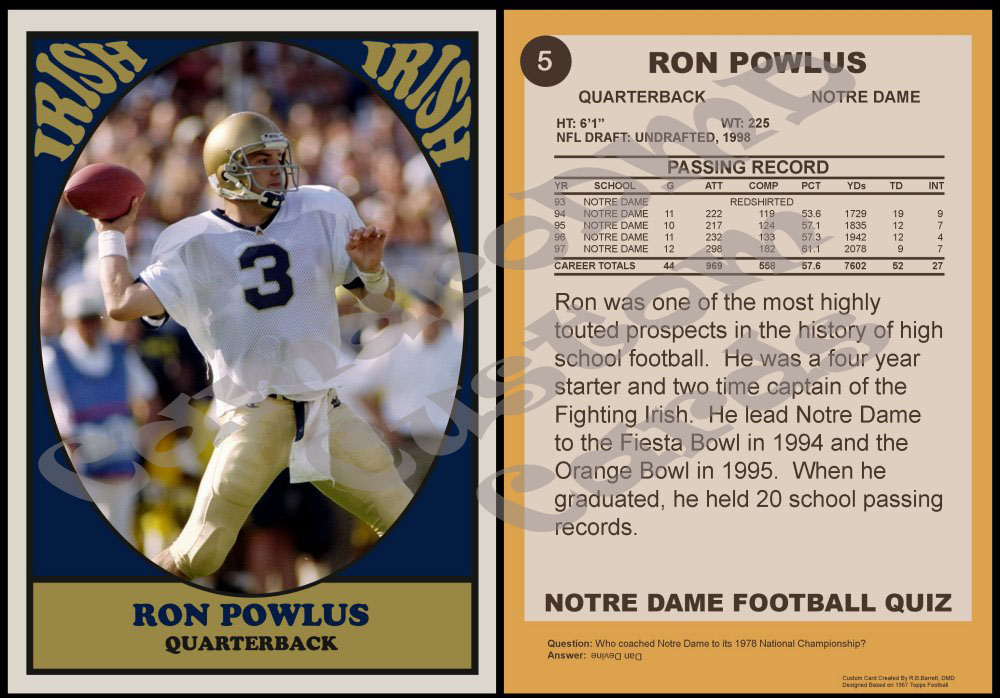 So, those are my cards for now. I have more in the works and I will post them once I finish them.
R

I'm starting to think that Topps, Panini, etc. need to hire you as their new Director of Art and Design... !!!!

OK, here are a couple more.

One of my biggest pet peeves with vintage Topps is they often lacked to produce a final year card for players...sometimes they didn't produce a card for the last several years of their career. For me, a final card should be produced in the set after the players last season...so their whole career is summed up on back of the card.

A great example is Joe Namath. Namath played in the AFL/NFL from 1965-1977. But, his final card was produced in 1973 which means that only his career from 65-72 is reflected in a Topps set. 73-77 is not illustrated anywhere. Now I will admit those last few years were not the best for Joe, but I would have liked to see a card. So, I have decided to fix this. I have created a "final" card for Joe Namath. The card is made in the design of 1978 Topps and therefore shows his entire career on the back. 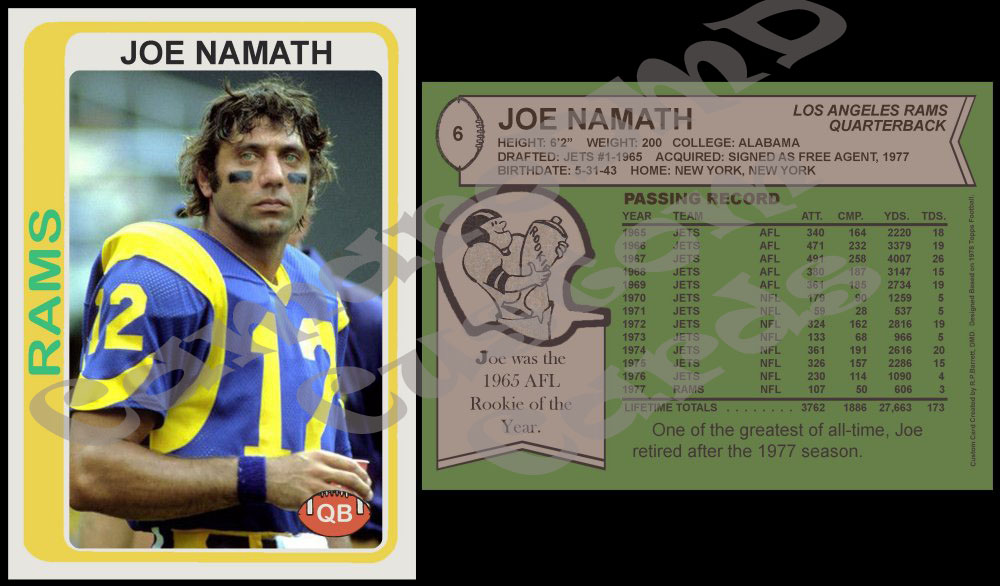 I also created another Notre Dame card using my 1967 Topps themed template. This one of my favorite player Joe Montana. 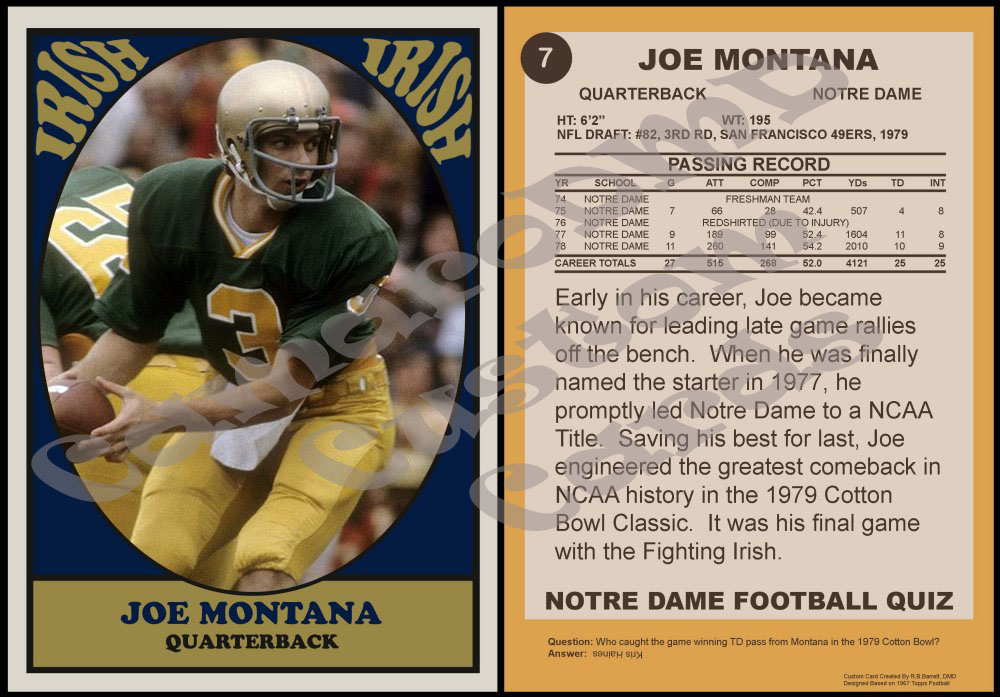 ranbethscards said:
Namath with the Rams.... Sad...lol
Click to expand...

OK, so I have a new project that I am working on that I want to share. First, let me explain the idea behind it. As a child, a family friend (who owned a card shop that went out of business) gave my brother and I many boxes of late 1980s Topps football cards. Because of that, those sets have a strong tie to my youth and the one set that really sticks out in my mind is the 1989 Topps 1000 Yard Club glossy inserts. I think I really liked the vivid colors and fun design. They are one of my favorites.

So, I wanted to do something with that design. I decided to do a set commemorating all the quarterbacks who have reached the 40,000 passing yard mark. So, I am creating a 1989 Topps 40,000 Yard Club Set. As of right now, there are 18 players who have reached 40,000 career passing yards. I will be creating the set in chronological order of when the player reached the milestone.

Here are the first 3: 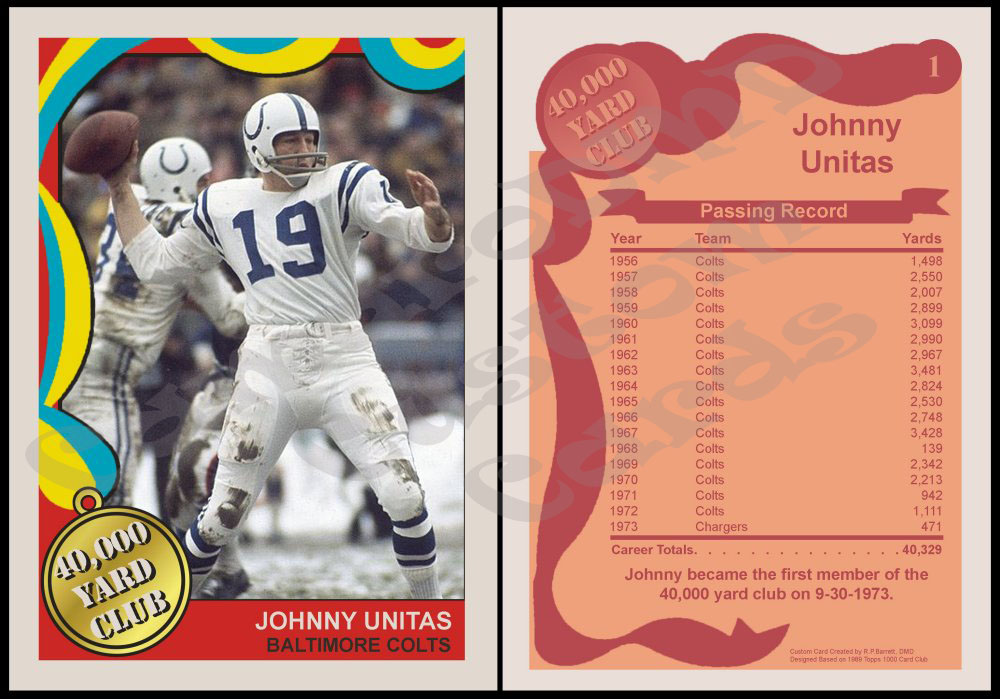 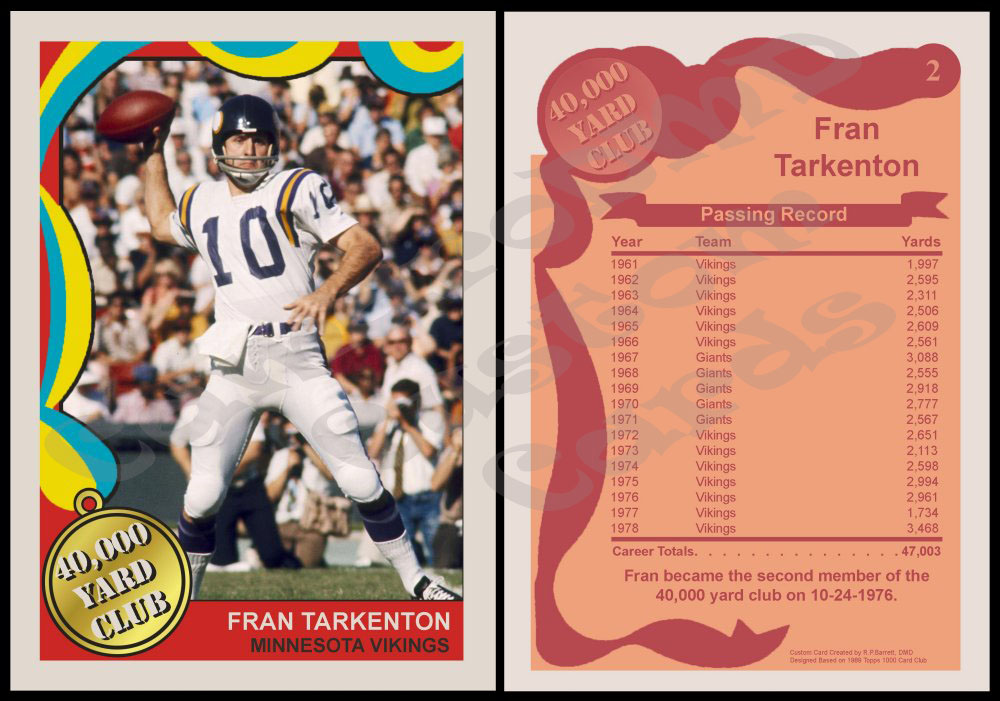 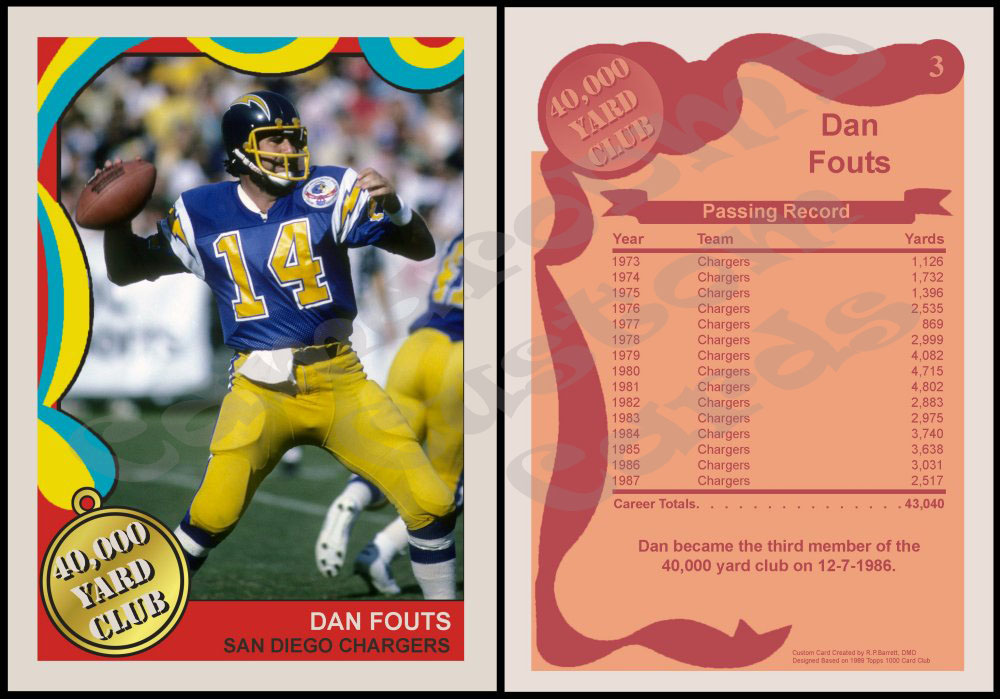 I will post the rest of this set as I make them and put them in his thread among my other creations.

Dan "The Man" Fouts... one of my favorite QBs of all time. Great looking cards!

ranbethscards said:
Dan "The Man" Fouts... one of my favorite QBs of all time. Great looking cards!
Click to expand...

And a Duck! He played before my time but the films I have seen of him and that Don Coryell offense are pretty amazing.

Glad you like the cards. I'm actually really excited to print some of those up. I think they are gonna look really cool in hand.

OK, here are a few more. 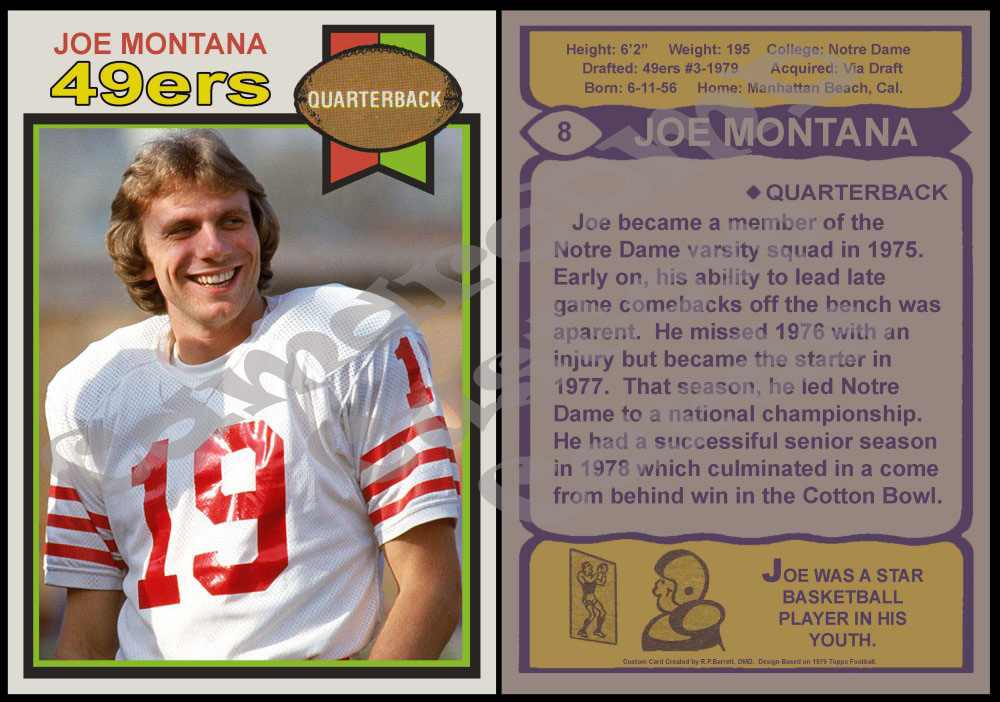 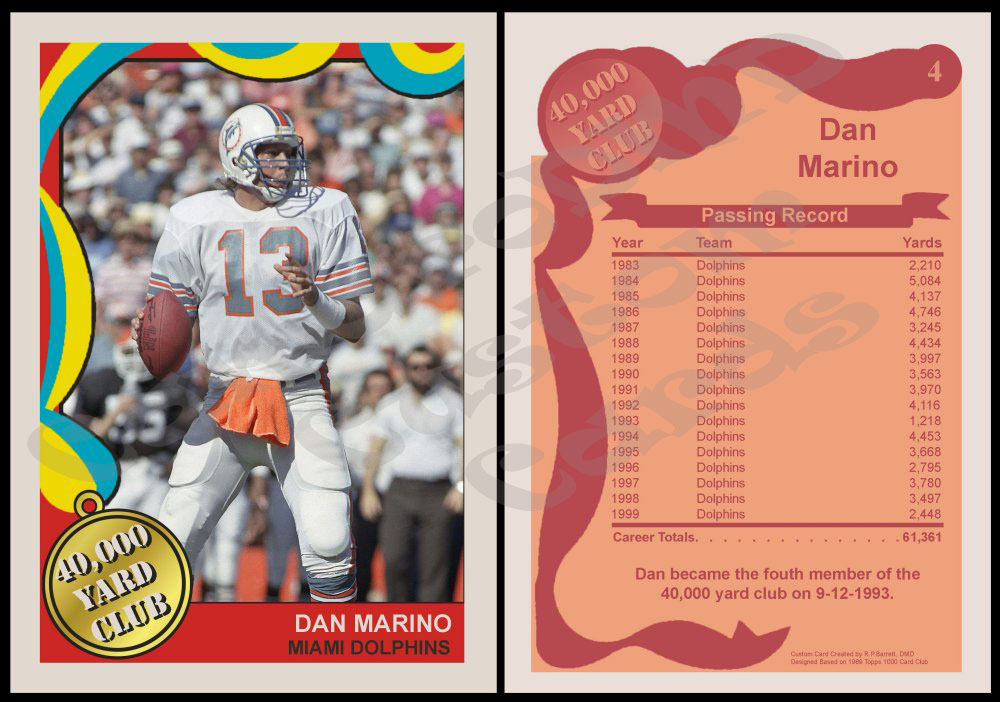 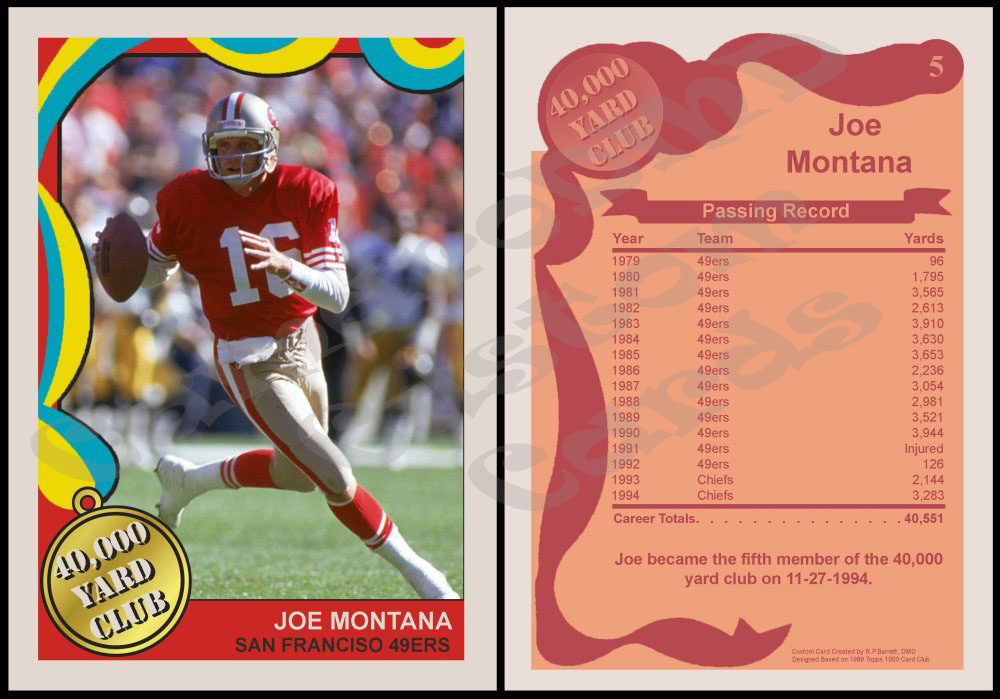 Here are the next 3 of my 40,000 Yard Set. Also, the dates on the back of the Warren Moon and John Elway cards are correct. Both players passed the 40,000 yard mark on the same day. Moon passed it earlier in the day which is why he is the 6th member of the club and Elway the 7th. 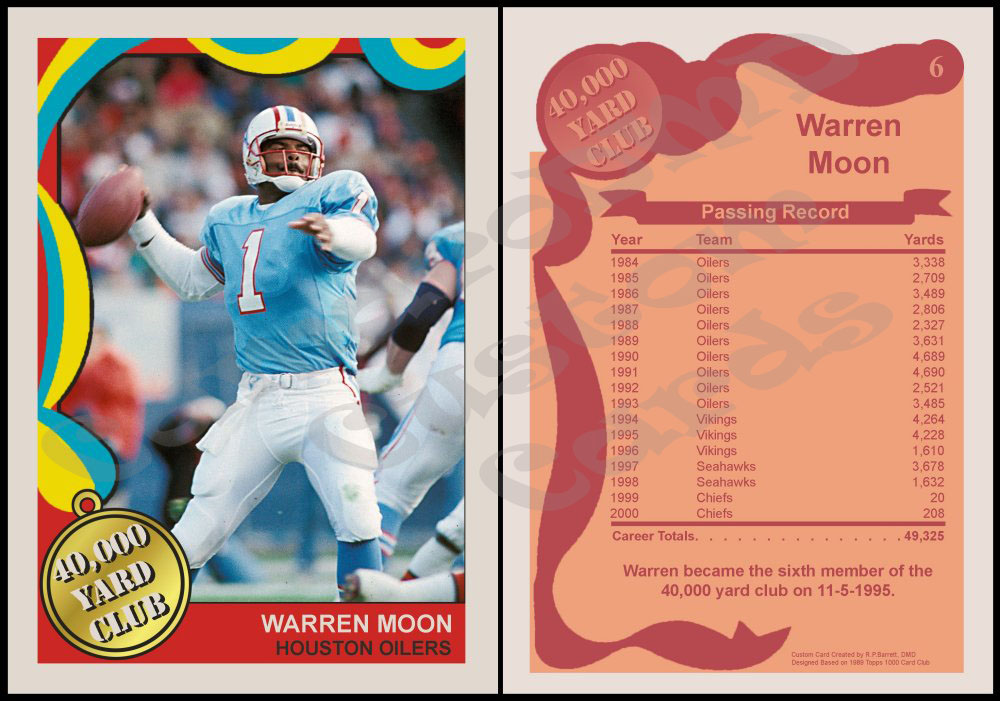 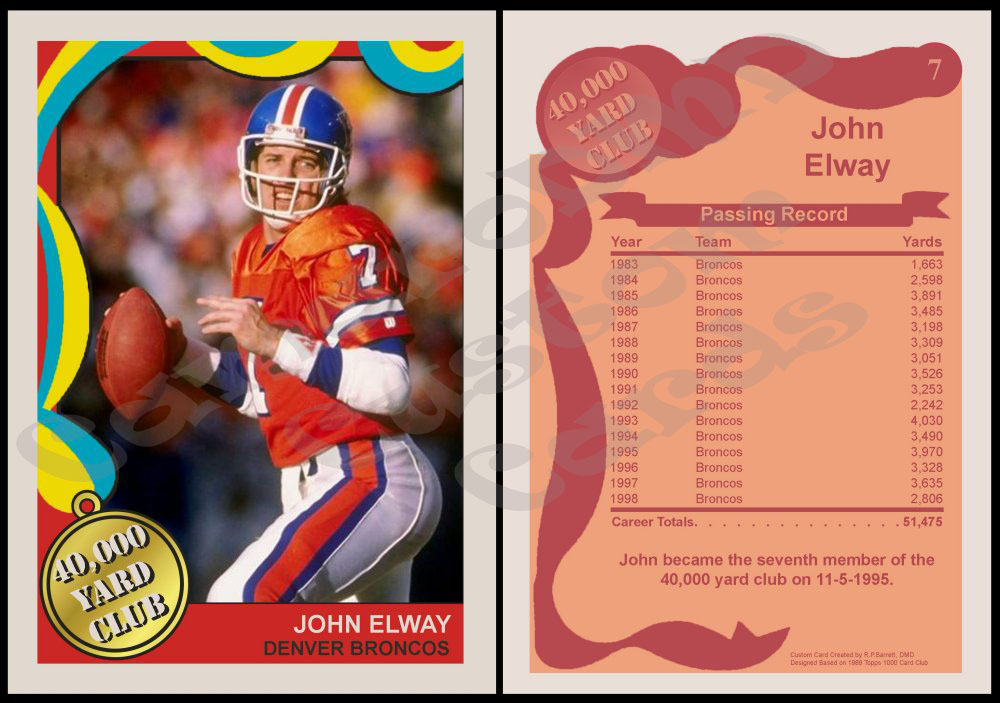 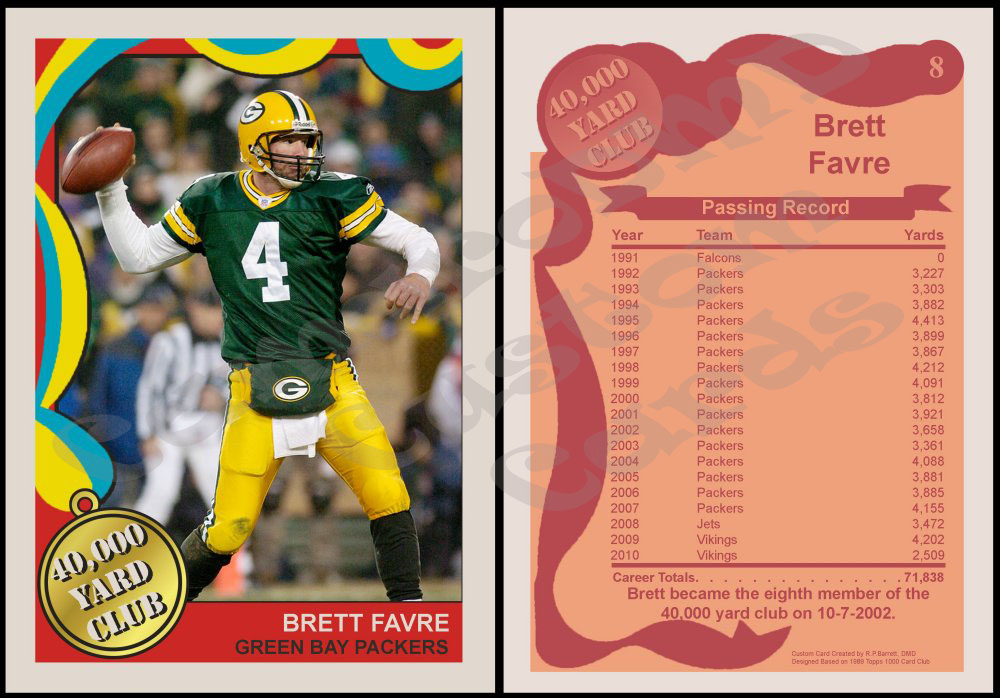 So, I started creating custom cards a while back to learn photostop...but I also did it with the long term goal of getting a signed card of a specific player. Danny O'Neil was the Oregon QB when I was a kid and at the time was one of my favorite players. To this day, he still is. Well, he never made the NFL and as a result he never really had a card. He did have 3 Oregon produced cards when he was a player (they were oversized cards that came as part of a 12 card sheet)...but other than that he didn't have any.

Because of all of that...the project that I decided upon was a Danny O'Neil card that was in the style of 1967 Topps football (my favorite set). I finished the card and had a ton of fun doing it...that prototype eventually turned into an Oregon set (the original O'Neil card is identical to the card posted in that thread except the number on the back of the prototype was his jersey number...#16).

Anyway, after I started to produce the cards...I decided I would attempt to track him down and send him one for a TTM autograph. I sent him a card and an 8x10 photo. I got them back signed on Friday! Here is the card. 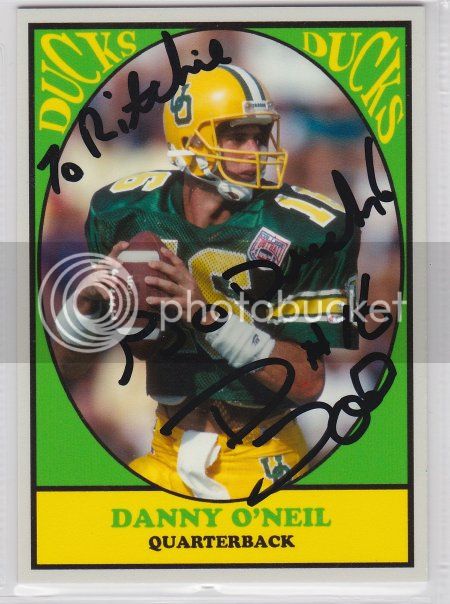 Thanks. The O'Neil is really special.

I'm not a fan of Favre either (or Elway for that matter)...but they meet the criteria for the set. Actually, a buddy of mine is a huge Favre fan so I'm probably gonna make an extra example of that card and give it to him.