When you walk into a good card shop, it’s can be a place you might not want to leave because of what’s found inside, what walks in the door and the discussions that take place.

And that’s exactly what viewers will get with Ball Boys, a reality show revolving around a hobby shop set to premiere on ABC on March.

The scene for the show is Robbie’s First Base, a shop in Timonium, Md., a suburb of Baltimore, which has been in business since 1989. It’s owned by Robbie Davis Sr., who works with his 30-year-old son, Robbie Jr., along with employees Shaggy and Sweet Lou. The first two episodes of the show, which is from the producers of Pawn Stars, will air beginning at 3 p.m. Eastern on March 24. 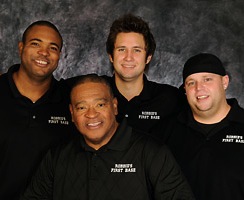 So, how did it all come about?

“One day, I was just sitting at my desk and the phone rang and the girl from Leftfield Pictures, the production company, asked me had I ever seen the show Pawn Stars,” said Robbie Jr. on Monday. “And oddly enough I had just seen it for the first time the week before, and I told my dad about it. She asked if we would be interested in doing a reality show about sports memorabilia.

“[We were] amazed,” he said. “[It was a] very easy decision. Anytime a small business gets an opportunity like this, it’s a no-brainer.”

Davis said filming began last August and ABC has ordered 12 half-hour episodes. Like Pawn Stars, it will revolve around finds that make their way into the shop, the drama that comes with considering purchases of said items, and the daily happenings that include plenty of sports chatter. Oh, and some special guests, too.

Any memorable arguments Davis wishes had been caught on film?

“Man, that’s tough because we argue about sports everyday!” he said. “From who’s the best baseball player of all time, to the best center in NBA history, best baseball starting nine to best multi-sport athlete, it goes on and on. Of course Senior always takes the side of his generations players and we like our guys!

“I think we’re a good fit [for TV] because we all have very different personalities but we all are passionate sports fans and have been collectors since we were kids. We all love to argue about sports and of course we always right in our own minds.” 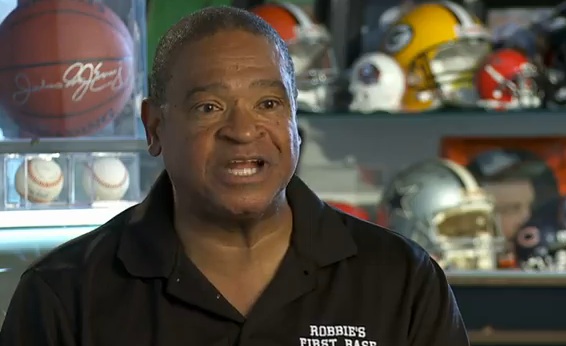 Robbie Davis Sr. is the owner of Robbie's First Base.

In the teaser trailer for the show, former MLB star Pete Rose, NFL legend Jim Brown and MLB newcomer Logan Morrison, who used to work in a card shop himself, are among those seen visiting the store. In the trailer, Robbie Jr. touts his dad’s business ties and the people he knows.

“Senior owned a couple of car dealerships in the Baltimore area,” Davis said. “Which is where his relationships with many ballplayers developed.”

In fact, Robbie Jr. and his buddies lived in the shop as kids.

“We’re all very in touch with what’s going on in the industry,” he said. “Shaggy, Sweet Lou and myself pretty much grew up in the shop and around ballplayers.”

So, did Robbie Jr. ever have any idea that a hobby shop could become a reality show?

Like other shops that sprouted up during the hobby’s national boom, Robbie’s has had its share of struggles, too. That has meant evolving into more than just a card shop.

“When we opened in 1989 we certainly specialized in cards. We had memorabilia but people weren’t really interested in collecting autographs as much as cards at that time,” Davis said. “Kids really did drive the market at that time. From busting open wax packs to collecting the top singles that Beckett featured every month. That’s what fueled our business. Here locally, after the baseball strike and general disinterest in baseball as a whole made our card business take a nosedive. After that, football sort of took over and the memorabilia craze started for us.”

So, are there any drawbacks to having the spotlight of national television shining on a shop? Any worries about authentication with so much attention — and potential items to be sold walking in the door?

So, what kind of cool stuff has walked in the door besides the weird items caught in the trailer?

“The coolest item to me would have to be Babe Ruth signed baseballs,” Davis said. “We’ve had multiple, but to me they’re always the coolest. To me the entire collecting world centers around baseball, which centers around the New York Yankees, which are centered around Babe Ruth. To me he is the undisputed king of all sports and the Yankees are the most recognizable team in American sports history.”

The production crews spent three months at the shop — so far — so there’s plenty caught on tape.

“We started filming in August and went for five or six days a week,” Davis said. “The production crew was in our store eight to 10 hours a day everyday, unless we shot off-site.”

Off-site filming included, among other things, a road trip to the Baseball Hall of Fame in Cooperstown, N.Y.

“The most memorable thing so far would probably be the Cooperstown trip where we had access to things in the Hall of Fame that the general public doesn’t,” said Davis of the highlights from filming. “I would elaborate, but I’d rather you just watch the show. It’s pretty cool stuff!”

Chris Olds is the editor of Beckett Baseball magazine. Have a comment, question or idea? Send an email to him at colds@beckett.com.

Transactions
40
5.00 star(s)
Very cool, I haven't heard about this. Thanks for sharing, I will surely check this out.

Definitely excited about this as well. Finally some recognition for the hobby!

waxgeeks said:
Definitely excited about this as well. Finally some recognition for the hobby!
Click to expand...

Maybe our wives and us should have dinner that night....

Staff member
Transactions
138
5.00 star(s)
I have never gotten into any of these reality shows, but this one will definately catch my attention. I hope it is done in a way that will bring the hobby back to what it use to be in popularity.

Who are Your Favorites?
2 3