Furyk Still Leading After 2nd Round of the Bridgestone Invitational

Furyk scrambles to 4-under 66, stays in lead
By DOUG FERGUSON (AP Golf Writer) | The Associated Press

AKRON, Ohio (AP) -- Jim Furyk and Tiger Woods each carried momentum into the second round of the Bridgestone Invitational. That meant the best 36-hole score for Furyk in his PGA Tour career, and the worst start for Woods in nearly fourth months.

Furyk had another good day with the putter, making a few birdies early and saving par from the bunker four times on the back nine at Firestone for a 4-under 66 and a two-shot lead over Rafa Cabrera-Bello of Spain.

It helped that Furyk opened with a 63 on Thursday afternoon, allowing him to turn around Friday morning and try to resume his good play. That's what he did, starting with a tricky birdie putt on the second hole and following his lone bogey with a 20-foot birdie on the ninth.

''Just probably a little easier to keep the momentum going that way than having an early time on Thursday, having a good round and having to sit on it until Friday afternoon,'' he said. ''I thought it was key to get off to a nice start and see some putts go in. Made a good birdie putt at 2, and saw some birdies go in on the front nine, good putt at 9, and off to the races.''

He was at 11-under 129, two shots clear of Cabrera-Bello, who had a 65. Louis Oosthuizen used his putter from just off the ninth green to finish with a birdie and a 65, leaving him three shots behind going into the weekend of this World Golf Championship. Jason Dufner had a 66 in the afternoon and was four shots behind.

Woods, a seven-time winner at Firestone, can't seem to get anything going.

He threw away three shots on the back nine Thursday, the last one a three-putt on the 18th hole for a 70. He started his second round by driving into a bunker and making a bogey on the 10th hole, and it never got much better. For the second straight day, he had to lay up with his third shot on the par-5 16th. And the low point of his putting woes came on the seventh hole, when he stuffed his tee shot inside 5 feet and three-putted for bogey.

He said he finally figured out something was wrong with his putting stroke on his 17th hole, and it had to do with the path of the club.

''I'm sure it helped on that little one-and-a-half footer on the last hole,'' he said.

Woods had a 72 and was at 2-over 142, leaving him 13 shots behind on the course where he had never finished worse than fifth the first 11 times he played. It was his highest 36-hole score to par since his 3-over 145 start at the Masters.

''I get in these little spells where it's hot or cold,'' Woods said about his putting. ''Generally, I was a decent putter over the years, but lately it's been very streaky. I'm making everything or I make nothing.''

Phil Mickelson switched putters and found moderate success. He had a 69, and while that left him 11 shots behind, he ended a streak of 10 consecutive rounds without breaking par on the PGA Tour. Mickelson did have rounds of 64-65 at Castle Stuart in the Scottish Open.

''I'm piecing it together,'' Mickelson said.

Furyk has taken 11 fewer putts than Woods, a big turnaround from his game a year ago when his putter kept him without a win and out of the Tour Championship for only the third time in his career. He seems to do better on fast greens - remember, Furyk went 5-0 in the Presidents late last year on the slick greens of Royal Melbourne - and that's what he is facing at Firestone.

In steamy conditions, even in the morning, the greens were pure and the fairways also were running fast. Furyk got so much carry through the hot air and so much bounce on the carpet-like fairways that his drive on the 18th hole went 371 yards, leaving him between a sand wedge and a lob wedge for his second shot. It went long into the back bunker, leading to another par save, and Furyk was asked if he ever had to decide between two wedges on the 464-yard closing hole at Firestone.

David Toms, playing for the first time since the U.S. Open, quickly got back in stride with a 67 that put him at 5-under 135, along with Luke Donald (69). Steve Stricker appears to finally be getting his putting stroke back. He had another 68 and was in the group at 4-under 136.

Furyk's lone bogey came on the eighth hole, when he hit a tree with his tee shot and had to hit 3-wood to get near the green. Some might think that long clubs into par 4s on Firestone are typical for players who don't routinely smash tee shots.

Furyk never understood that. Everyone is long this week because of the fast conditions and hot weather. Even in normal conditions, Furyk always looked at the South Course as keeping the ball in play off the tee because of the trees and typically thick rough.

''I've never really stepped up on a tee here and felt like I struggle to compete because of a lack of length at this golf course,'' Furyk said. ''I don't know what it says the distance is on the card. It's just not playing that long, to be honest with you. 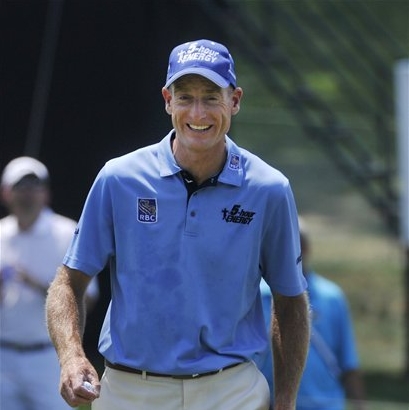 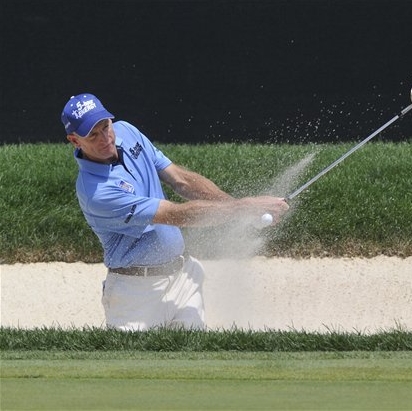 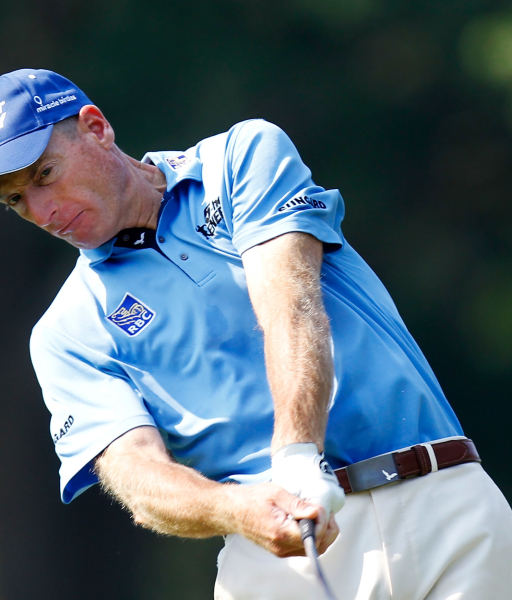 Jim Furyk Leads 1st Round of the Bridgestone Invitational