So, I just got home from my week long vacation to a mailbox full of things...including a few card purchases. I thought I would share them.

I have recently accepted the fact that I love to collect the sets I collected as a child as well as the sets that I dreamed about as a child (mostly vintage football). Unfortunately, I have also accepted that there are so many sets that I like that it's hard to stay focused on one and I tend to bounce around. That's not a huge deal, I like it and it keeps the interest fresh. But, rather than create a new thread for each set I am working on...I thought I would create one thread and just share all my pickups.

So, to that end...here is what I recently picked up.

First up is a pair of pieces from a set I loved as a kid. It is from 1997 Press Pass football. This was one of the first college dedicated sets I discovered and it was right about when I was really getting into college football. The set, although small, was full of stars that I loved and it was a ton of fun. I'd love to try and put together a master set eventually...and I already had a couple nice pieces (one of the Joe Paterno SP parallel cards and the Danny Wuerffel autograph). So, here are a couple more that were waiting in my mailbox. 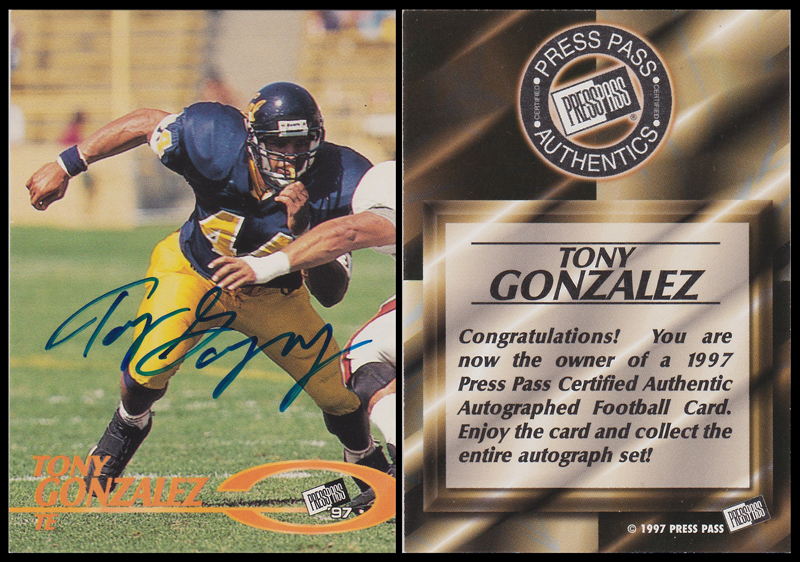 Up next is a really interesting piece and might make a true master set very difficult to complete. This card is a "parallel" of the Big 12 Insert Set (Big 12 in reference to 12 Major Prospects in that draft...not the new conference that had just completed its first season).

One of the major sales gimmicks of the 1997 Press Pass set is they were giving away 75 autographed NFL jerseys of key prospects. The giveaway was done through redemption cards. Since the "Big 12" insert set was the major prospects, it made sense to use those as the redemption cards. Each card in the set had a special redemption version created and individually numbered to 25. So, 300 totals cards were produced (25 sets of 12). IF the player pictured on the card was drafted in the top 3 of the 1997 NFL draft, the card could be redeemed for an autographed NFL jersey of that player. The top 3 picks were Orlando Pace, Darrell Russell and Shawn Springs. All 3 of those players had cards in the Big 12 sets. The other 9 cards were not winners.

When I found this card for sale online some time ago, I had to have it. I had never seen another example of one. This card was of the player picked #4 in the draft...so it was not a winner but it was still a really neat find. 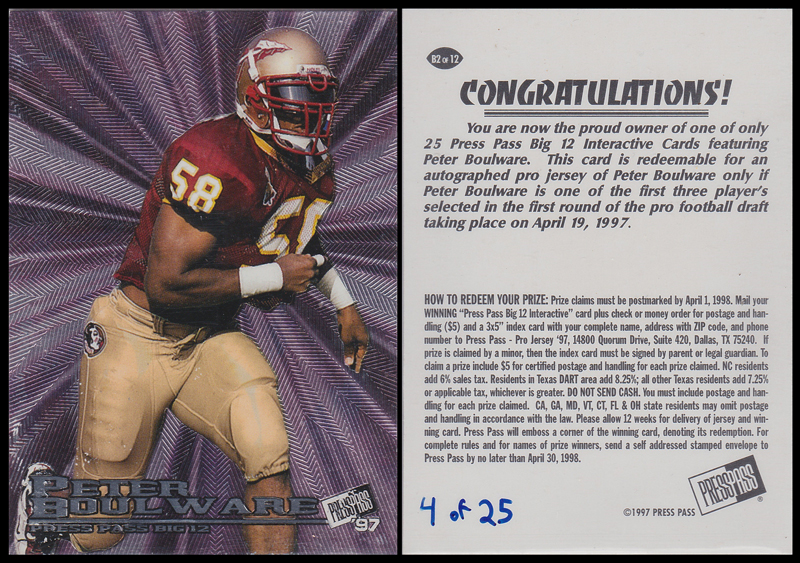 Up next is an autograph from the 1999 Fleer SI set. I always liked this set...it had a lot of great players and featured covers of old SI magazines. Earl Morrall is a fascinating player in league history so that made this one even cooler to me. 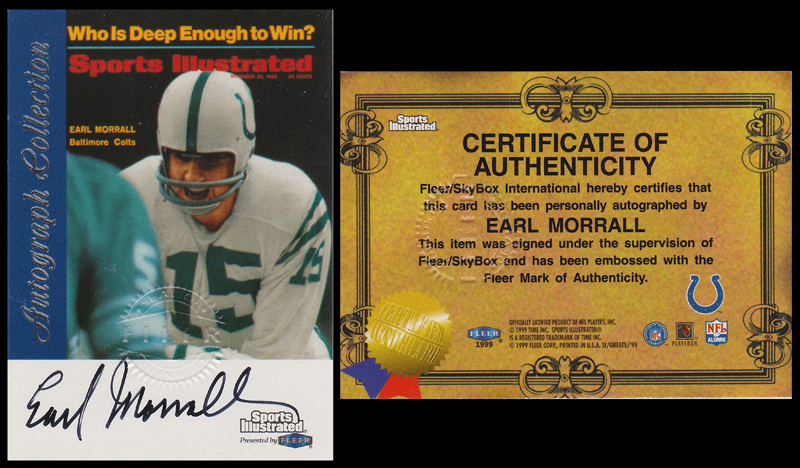 Speaking of SI covers...here is a signed 8x10 print of an SI cover that I have had for years. Some time ago, I decided it was time to try and get it signed so I wrote to him. It was in my mailbox when I got home. 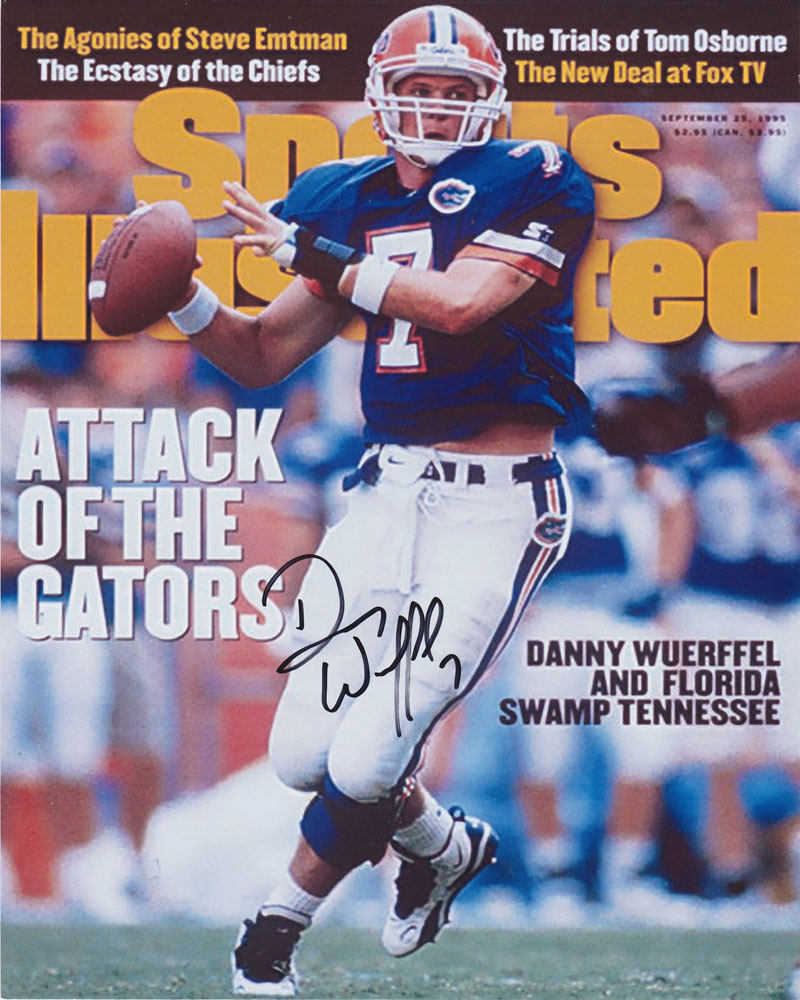 Here is another one that came in today...this one is probably from my favorite set ever produced - 1997 Upper Deck Legends. I remember busting a ton of these as a kid and really loving the product.

This was right about when redemption autographs started popping up. The players were not being super reliable about getting their autos in on time so a number of them were put in as redemptions.

Today with as popular as this set has become, even the redemption cards are popular. This is especially true of the handful of players that never signed their cards. As an example, when I was a kid and this product was new I pulled a auto redemption for Billy "White Shoes" Johnson. I promptly sent it in and waited the several weeks for the card to arrive. When the package came...I opened it and found a signed card of Mike Singletary. At the time, I was thrilled. Singletary was a legendary Hall of Famer and growing up in a house where everyone love the Bears...it was a great card. As it turned out, Johnson never signed his cards so they were sending out replacements. Today, that Johnson auto redemption is worth far more than the Singletary auto.

But, quite a few of them did sign and the redemptions were properly filled (I pulled a Randy White in this way).

When I can find them, I try and pick up unused redemption cards. It just adds variety to the set. Recently, I found an Art Donovan and as typical, the redemption sells for more than his auto card (Donovan signed his cards). It ended up costing a little more than I wanted to pay but sometimes that's how it goes.

So, here it is 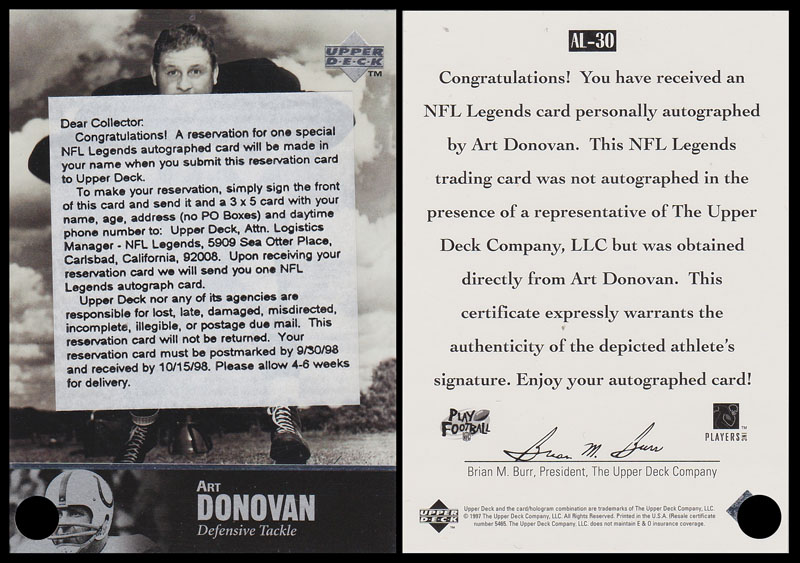 OK, this is a big one for me. Ever since I was a kid...I loved 1997 UD Legends. In my opinion, its the greatest set ever produced.

The autograph parallel inserts get all the love...but they were not the the rarest autos in the set by any means. That honor falls to the "Sign of the Times" insert set. It was a small 10 card set featuring some of the biggest names in football history. Each card was limited to 100 copies.

Needless to say, this set has been a dream of mine...and I finally decided it was time to start working on that dream. Quite possibly the biggest dream set for me. A seller online had a pair of cards from the set: Terry Bradshaw and Franco Harris. I couldn't afford both and frankly I would have preferred to have the Bradshaw. However, the auto on the Bradshaw was not crisp and was a bit faded. So, I passed on that one and I picked up the Franco.

One card down...nine to go. 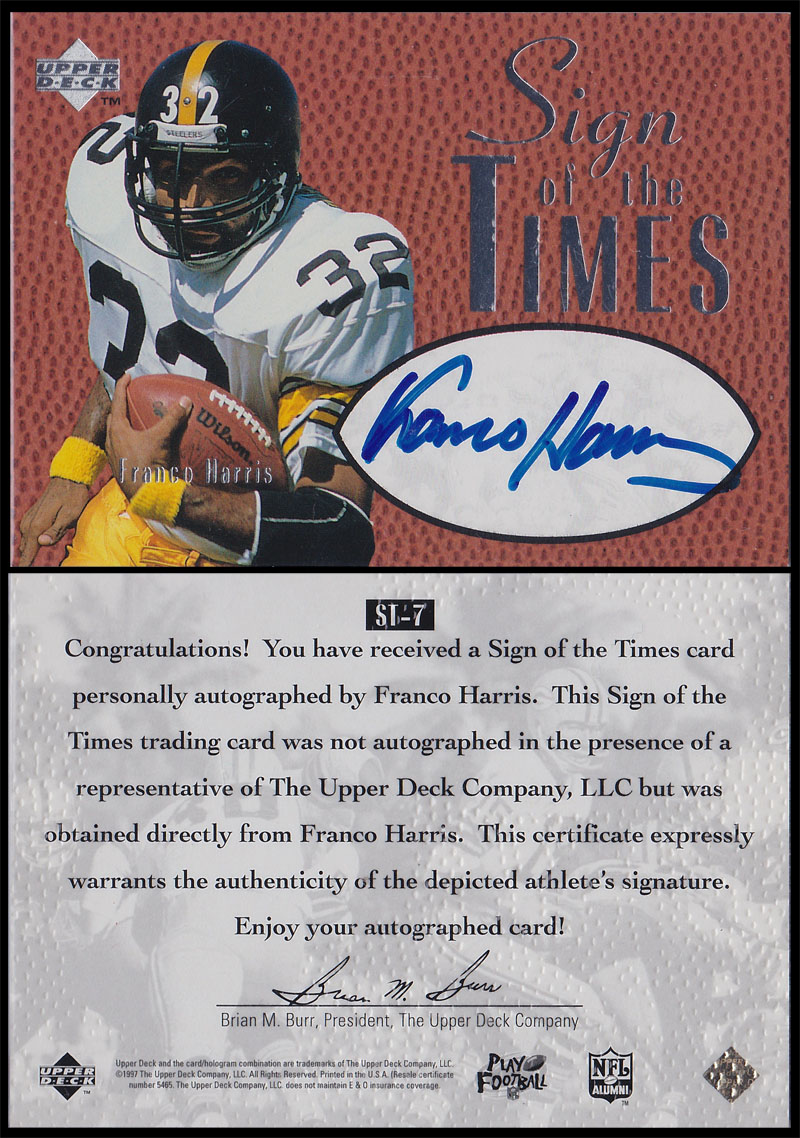 Here are a few more I picked up recently. The first two are a small part of a "dream set" of mine. My favorite vintage set without question is 1967 Topps football. I have a complete set but I would love to assemble a complete signed set. Recently I picked up a pair of signed Chiefs cards from the set, both of deceased players. The Tyrer is especially hard to find as he passed away in 1980. 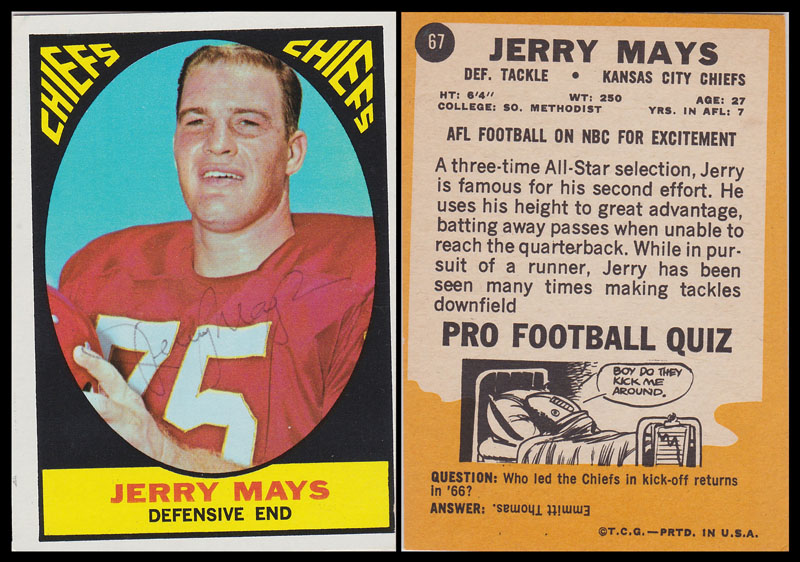 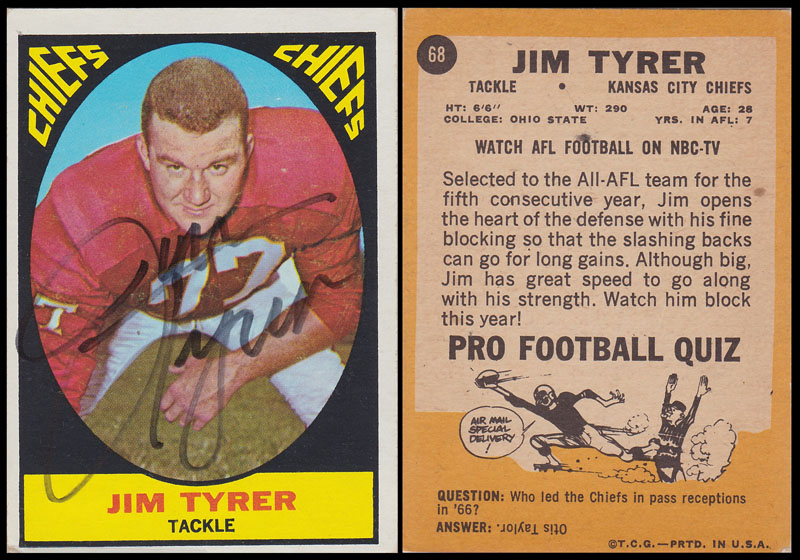 Next is an autographed insert from the 1999 Fleer Sports Illustrated issue. I remember as a kid loving this set. 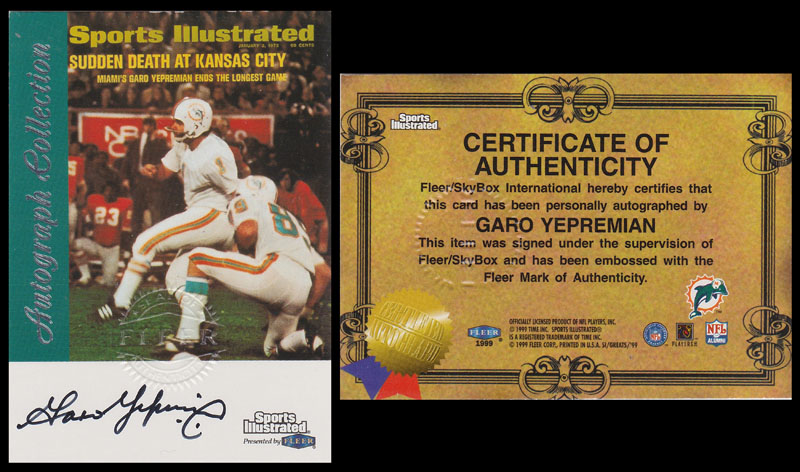 Here's a new one. This is part of an 8 card auto set from 1995 that I have been working on for the last few years. These cards are really hard to come by but this is the 4th in my collection. So, I'm half way done. 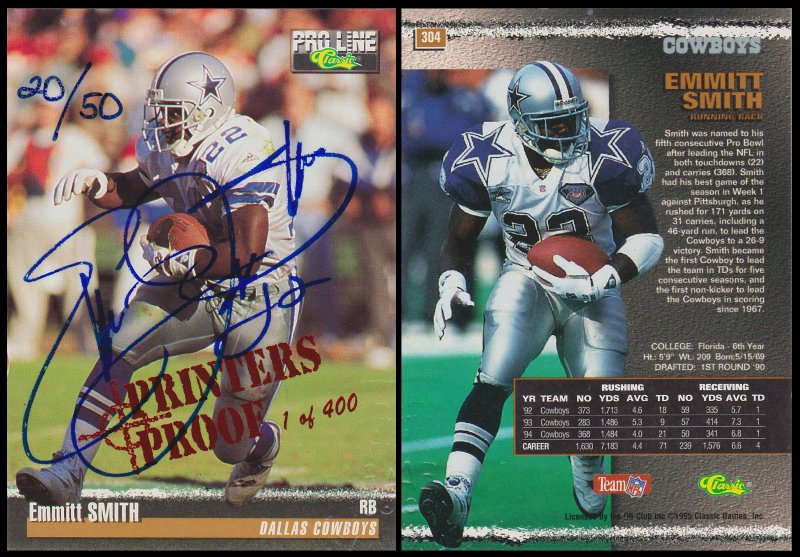 That is a really nice looking Emmitt Smith card. I love the auto, nice and clean, and practically a work of art in, and of itself!

I have a bunch of the SI auto cards, and I'm pretty sure, that I have some of the 1997 Press pass auto's also. I'll have to do a little digging, and we should talk, to see what you need.

unkilldoo said:
That is a really nice looking Emmitt Smith card. I love the auto, nice and clean, and practically a work of art in, and of itself!

I have a bunch of the SI auto cards, and I'm pretty sure, that I have some of the 1997 Press pass auto's also. I'll have to do a little digging, and we should talk, to see what you need.
Click to expand...

I totally agree. Emmitt has a beautiful signature...almost a work of art in itself. I had to pay more than I wanted for that one (probably more than it's really worth) but that's OK. There just aren't that many out there.

Let me know what you have as far as the SIs and Press Pass autos. Would love to make a deal!

Just for fun...here is my half set of 1995 Pro Line Printer's Proof Autographs. It has taken me a few years to get this far and there are four cards still out there. Still need the Troy Aikman, Steve Young, Boomer Esiason and Trent Dilfer. 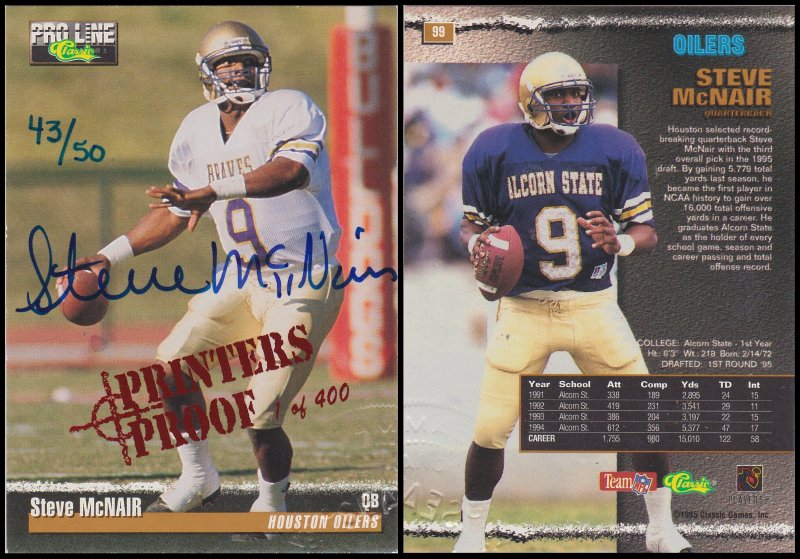 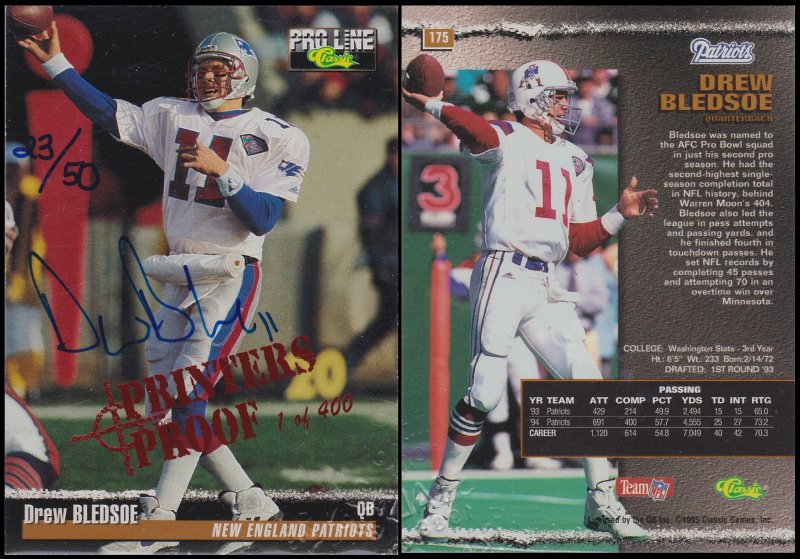 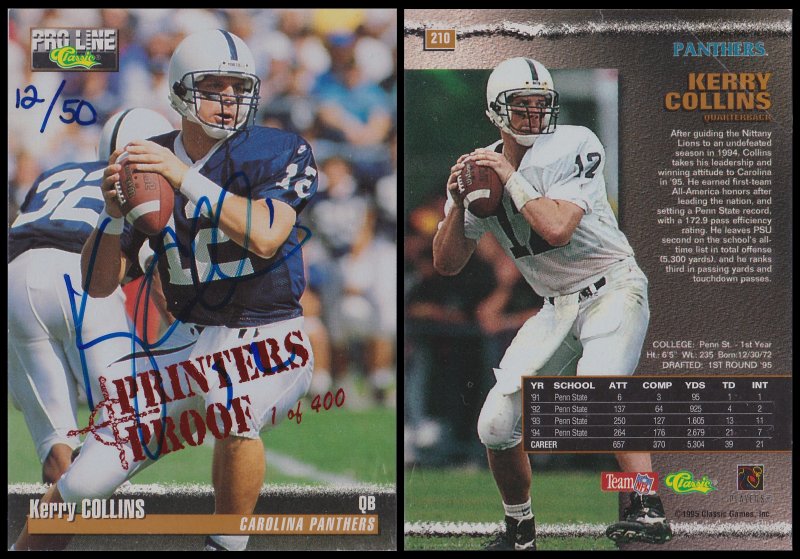 Here's a new TTM success that just came in the mail. This is part of my long term goal to assemble a complete signed 1967 Topps football set (my all time favorite set). Tom Flores was a legendary AFL player and great Raiders coach. He is also one of only 2 people to win a Super Bowl as a player, assistant coach and a head coach (the other being Mike Ditka). So, here it is: 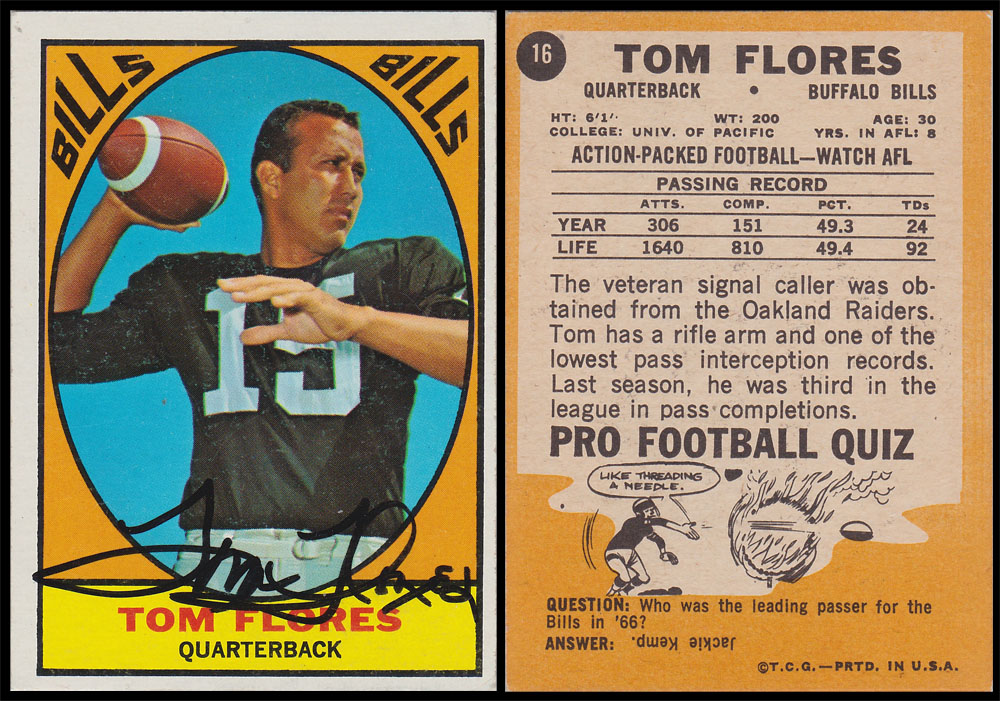 Nice card. You have a pretty good flow of autos coming in.

unkilldoo said:
Nice card. You have a pretty good flow of autos coming in.
Click to expand...

Thanks. I love collecting autographs through the mail and I have had some nice successes recently.

Not just sports too. As many of you may know, I have a deep love for the space program. I have applied to the Astronaut Crops (unsuccessfully) and I collect space related autographs.

My current pursuit is autographed spaceflight postal covers. Here is an example of one of my current projects.

This is a postal cover commemorates the launch of the STS-51-J space shuttle mission. It was the first flight of the Space Shuttle Atlantis (21st shuttle mission overall) and launched on October 3, 1985. It was a classified mission for the Department of Defense and landed on October 7, 1985. Atlantis 33 missions before being retired and is currently on display at the Kennedy Space Center in Florida.

I have been sending this cover to the members of the crew for the past several months and so far have had it signed by 4 of the 5 crew members. It is currently out again to the last member of the crew. Hopefully he will sign it and I will have a complete crew signed piece. 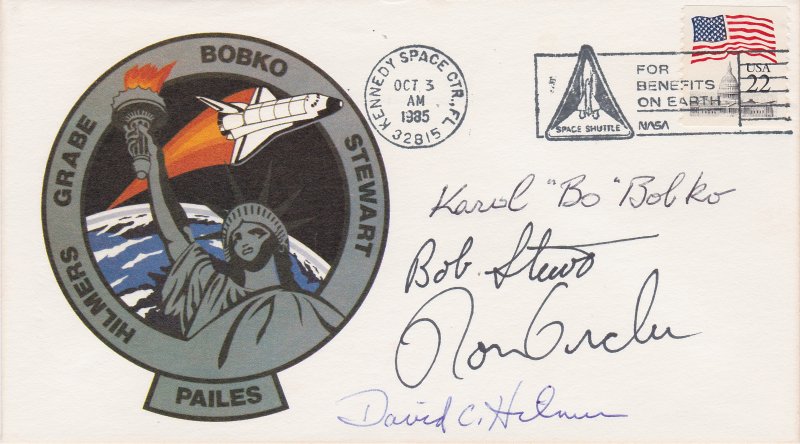