One of the things I have tried to always stay away from in this hobby is the "hot" player's cards. You know the type I'm talking about, players that suddenly burst onto the scene with huge hype but have yet to back it up (such as big rookies) or bench players who are suddenly thrust into the limelight, have a few good games and are suddenly today's big thing.

The reason I avoid these players is the prices are too volatile. One minute, the player's RC is selling for $100 and two weeks later (after a few poor performances) it's selling for $15. It might rocket back up in a couple more weeks or it might not. There is just too much unknown. I have always picked the players I liked and collected them...and if they are one of those "hot" players I will wait until the dust settles. I think in the long run, if you collect the "hot" player you lose money because more often than not...they aren't the second coming of Joe Montana. If I was buying cards to resell and turn a profit, there would be tremendous upside to these cards (and risk). But, I'm a collector...so I would rather play it safe as I'm in it for the long run.

That said, there has been one card I have had my eye on for some time...and I would put it in this "hot" category. A year or so ago...it was virtually worthless and because this player has had some success lately...it has been tending upward in value.

The player is Brian Hoyer. I have really enjoyed watching him play and I saw his potential during his couple starts last year (before his knee injury). He has come back this year and player very well IMHO. I think his days in Cleveland are numbered due to Manziel sitting there and him being in a contract year (which is a shame, I like him and I like Cleveland). I think next year he will be a starter somewhere and could be really successful. I know he isn't the biggest, strongest or fastest...but he seems to make plays when needed. I'm not saying he's the next Tom Brady, but I think he has a bright future.

The card I was after was his 2009 Playoff Contenders auto RC. It's not a serial numbered card and it's not his best auto rookie. But, it's from a very popular set. For the majority of this season, the card has been selling in the $50 range. To be honest, on my very limited budget...$50 is pretty steep for a card was selling for less than $10 at the start of last season. I told myself, I would be a buyer if the card dropped into the $25 range...that way, if it did plummet in value there's not much to lose. I like him, so I'd be willing to make a $20 bet on him.

Then, a few weeks back something great happened...Hoyer came out and had a horrible game against the Jaguars and the Browns lost. Overnight, this card went from selling for $50 to the $20 range. Even though he has rebounded, the value is still down a bit. One game doesn't make or break a career...and even the best have a few duds. But, this little hiccup performance drop the card prices down considerably...right into the range where I was willing to pay. Now, the prices are still all over the place...and I ended up budding on 3 different examples (being outbid twice) before I finally got one. But, I only paid about $21 for it yesterday.

I just realized, I didn't post a photo of this card here when I got it. Better late than never, here it is: 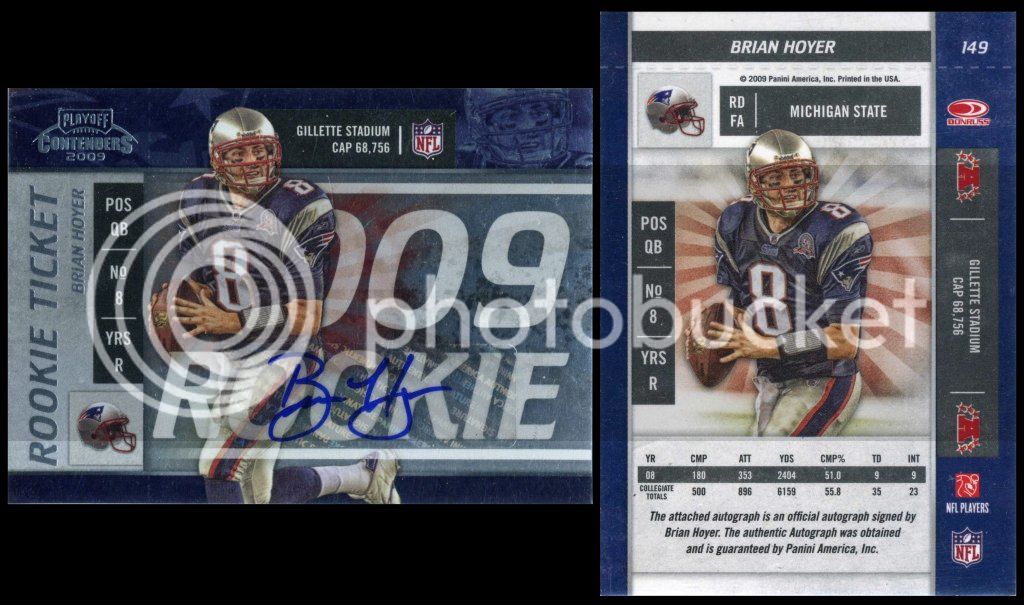 I just did some price checking on eBay...sales prices for these still cover a wide range...but most have sold in the $5-$15 range. So, I lost a little on it since I picked it up...but I still really like it and now that he's with the Texans maybe he will start to thrive.
C

We only could have hoped. Alas, hoyer was the same old hoyer. You never know maybe he'll show something next year. I just don't see him reaching elite status. Nice card though.
J

His photos, though, are pretty expensive! If you had an autographed Michigan State Spartans Fanatics Authentic 16" x 20" throw vs. Michigan photo, it's going for over $50 smackers.
J

When I first read "hot" card--I immediately thought someone had sold you a stolen card...ha..ha...(actually that wouldn't be funny at all, sorry.)

I understand your reluctance to get these specific cards. They might do nothing except eat a hole in your wallet.