AUGUSTA, Ga. (AP) -- Adam Scott became the first Australian to win the Masters, beating Angel Cabrera on the second hole of a playoff on a soggy Sunday at Augusta National.

The Masters went to a sudden-death playoff for the second year in a row when Scott and Cabrera made matching birdies on the 72nd hole.

They both made par on the first extra hole, returning to No. 18, before Scott rolled in a 12-footer for birdie to win it.

Scott pumped his fists in the air, screaming toward the gray, darkening sky, and embraced caddie Steve Williams, who was on the bag for 13 of Tiger Woods' 14 major titles.

For Scott, this is the first, making up for his major meltdown at last year's British Open, where he bogeyed the last four holes to lose by a stroke to Ernie Els.

Scott, playing in the next-to-last group, made a 20-foot putt at 18 and celebrated with Williams as if it were over. Cabrera, in the final group, watched from the fairway knowing he had to hit a brilliant shot.

Cabrera's ball pulled up 3 feet from the cup for an easy birdie that sent the two players to the playoff tied at 9-under 279.

''That's how golf is,'' said Cabrera, who was denied his third major title. ''I had some issues during the course but I came back.''

Another Australian, Jason Day, had the lead until he bogeyed the 16th and 17th holes. He finished two strokes out of the playoff at 281.

Woods, the overwhelming favorite, came up short again. He hasn't won the Masters since 2005, or any major championship since the 2008 U.S. Open.

Woods struggled with the putter on the front side, then missed a birdie try at No. 16 that could have put some pressure on the leaders.

''I had a hard time getting accustomed to the speed,'' said Woods, who finished in a tie for fourth at 283. ''Every putt I left short for probably the first eight holes.'' 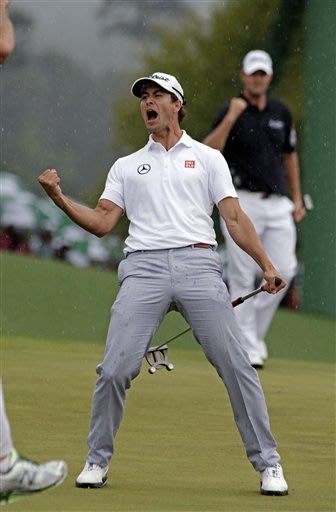 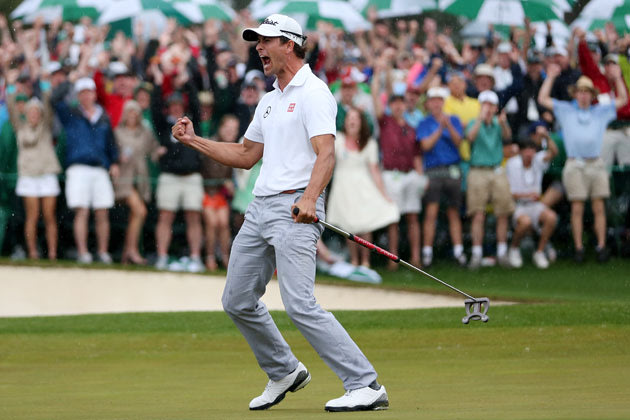 You see Marc Leishman in the background being happy for Adam?

You see Marc Leishman in the background being happy for Adam?
Click to expand...

Oh, no I didn't see that. This pic must have been from his birdie at 18?

lol yeah. Good to see an Aussie support another Aussie