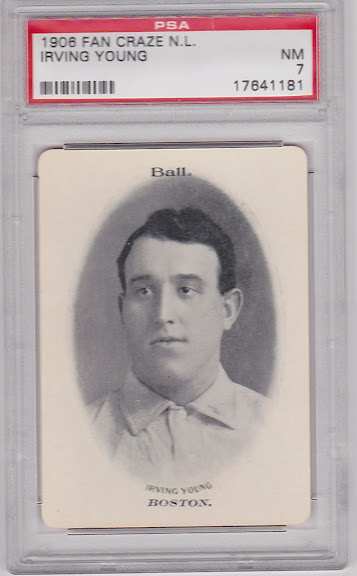 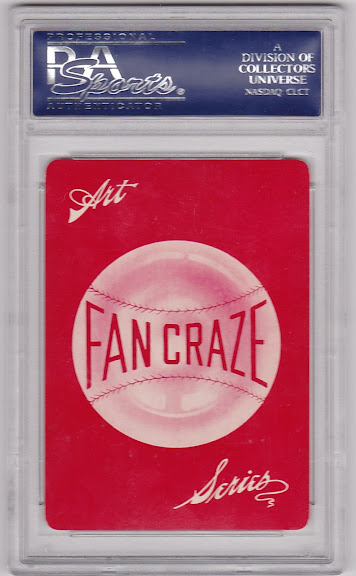 ​
Here's a little about the Fan craze cards from an auction catalog:

The Fan Craze playing card sets feature what many collectors consider the finest portrait poses of turn-of-the-century ballplayers ever produced on baseball cards. Fan Craze were issued in 1904 (the American League set with backs printed in blue) and in 1906 (the National League set with backs printed in red) by the Fan Craze Company of Cincinnati. These playing cards were designed to be used to play an exciting indoor baseball game. Fan Craze have a special significance to collectors. They are one of the few sets issued in the earliest years of the twentieth century, and the set includes many players who appear in no other card sets. Because of its year(s) of issue, it is also one of the few sets which include a blend of 1910-era stars along with players who made their mark in the nineteenth century, such as Joe Kelley and Jake Beckley, who in 1906 were just winding down their playing careers. Fan Craze are one of the few and one of the most important issues of the era, and in the opinion of many these cards also represent one of the best values of all cards issued in the early 1900s.
Click to expand...

Transactions: 4
That is a very nice card! And for those that know who I am, you aren't alone in the vintage area.

Staff member
Transactions
138
5.00 star(s)
That us a beautiful vintage card, and I would definately leave it in the case!

franklinguy52 said:
That us a beautiful vintage card, and I would definately leave it in the case!
Click to expand...

I'm leaning that way, too.

I'm glad to see that vintage cards are appreciated. I lurk in a vintage forum elsewhere and those guys are kind of snobby. This place is very welcoming.

Transactions
112
5.00 star(s)
Awesome card, Bob, and like others have said it'd stay in the case if it were mine too. I also liked the little tidbit you quoted about the set. Very good read. To be honest, I'd never even heard of those cards until now.

Mike, I had heard them referred to from time to time but I knew next to nothing about them either. I've got about ten early century sets as 'saved searches' on eBay and every once in awhile I'll just poke through them hoping for a bargain to pop up. I've seen these going for much more than I paid in much worse condition so I bit. I think someone is breaking up a very nice set.

commishbob said:
I'm glad to see that vintage cards are appreciated. I lurk in a vintage forum elsewhere and those guys are kind of snobby. This place is very welcoming.
Click to expand...

My client is invoking his Fifth Amendment rights at this point, Your Honor.

Transactions: 6
Sweet one, waaaaaay older than my oldest card, 51 years to be exact I bet it would be sweet to go through your stuff Bob (in a "just looking" kinda way! Don't worry! )